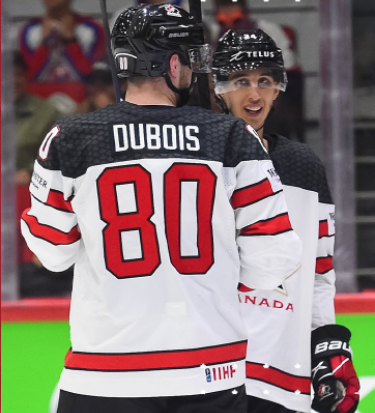 By Thomas Hall
6 months ago
In Canada’s third game of the 2022 IIHF World Championship, they faced off against Slovakia and cruised to a 5-1 victory thanks to the efforts of two Winnipeg Jets forwards, @Pierre-Luc Dubois and @Adam Lowry.
Breaking a tie score midway through the opening period, Lowry scored his first goal of the tournament – and his first during international play, as well. However, upon review, it appeared the puck deflected off one of Slovakia’s defencemen and completely missed Lowry.
Still, he was credited with the score. With it, the veteran forward handed Team Canada a 1-0 lead.
Later in the game, Lowry, 29, earned a primary assist on teammate @Cole Sillinger’s second goal of this year’s event. The marker came at the 1:08 mark of the third period, extending Canada’s edge to 4-1.
Overall, Winnipeg’s third-line centre has now posted one goal and four points through three games with Team Canada. He scored 13 goals and 21 points across 79 contests during the 2021-22 NHL season.
As for Dubois, 23, he shined offensively once again and enjoyed another multi-goal performance. That’s his second of the tournament. Both of his markers came in the middle frame, though, his second score was easily the more impressive one of the pair.
The 6’3″ power centre battled through multiple defenders, was nearly knocked off possession once or twice and was checked down to the ice before finishing on his stomach for his country’s third goal of the game. It was a scene eerily similar to the ones that Jets fans witnessed this past season.
Following this stellar showing, Dubois leads all skaters across the event in goals, with four. He also sits tied for the second-most points (five) in the tournament, behind Czechia’s Roman Cervenka, who’s scored six.
With this latest victory, Canada remains undefeated with a 3-0-0 record at the 2022 IIHF World Championship. As a result, they currently rank first in Group A with nine points, thanks to a trio of regulation wins.
Team Canada will receive a two-day break in between games before facing Kazakhstan on Thursday at 1:20 p.m. ET.