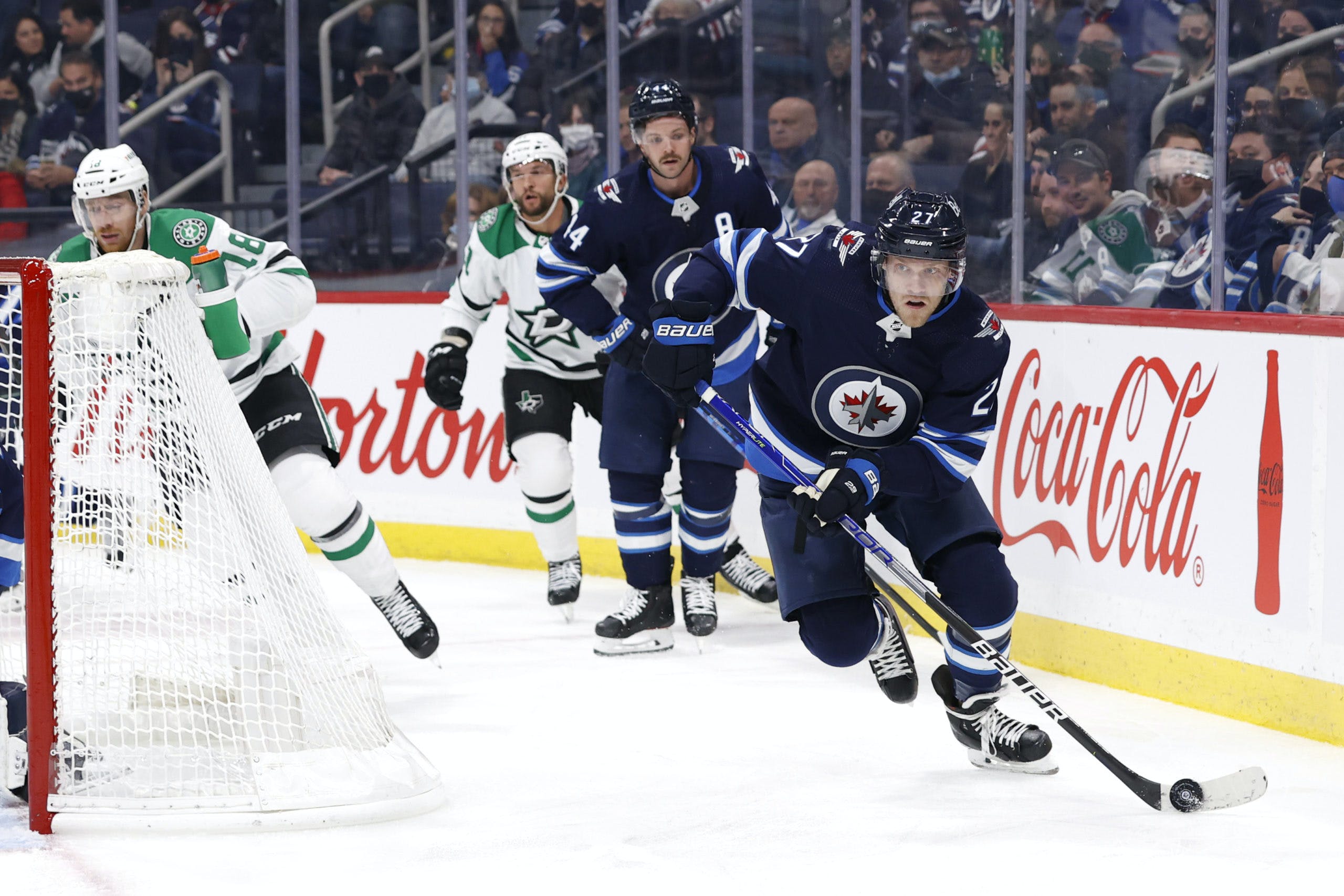 By Thomas Hall
9 months ago
After opening March with an exhilarating 8-4 victory over the Montreal Canadiens, the Winnipeg Jets have strung together two consecutive wins and will be looking to push their winning streak to three games Friday against the Dallas Stars.
Based on these two clubs’ recent history, however, accomplishing that feat likely won’t be easy.
In three previous matchups this season, each contest has extended beyond regulation and in one instance, past 3-on-3 overtime as well. Though that’s meant Winnipeg has earned at least one point during all three of its showdowns against this opponent, the last two meetings have featured an immense amount of heartbreak for this club.
Last month, the first clash against Dallas consisted of a late third-period comeback that saw forward @Mark Scheifele tie the game at 3-3 with just 32 seconds remaining in regulation. Unfortunately, these efforts were quickly undone as forward @Jason Robertson ultimately scored the game-winner in overtime.
Less than two weeks later, a similar incident occurred, this time, while the Jets were controlling a one-goal lead in the final frame. Sitting back on this slim edge, the Stars eventually broke through and knotted the score at two goals apiece, which opened the door for @Tyler Seguin to register the OT-winner less than a minute into extra time.
Now, this team must search for revenge as they’re currently seven points shy of the second wild-card seed in the West. Hoping to trim that deficit, let’s explore three storylines ahead of this final meeting of 2021-22 between the Jets and Stars.

The ‘Great Dane’ Returns From His Month-Plus Absence

Yes, that’s right. After missing over a month, forward @Nikolaj Ehlers is ready to return from his lower-body injury and will officially be in the line-up Friday against the Stars.
Without question, Ehlers, who hasn’t played since Jan. 18, was desperately missed during his time off and his return should provide a massive boost to the Jets’ roster. Though reaching the playoffs seems to be pretty much out of reach, at least, at the moment, it’ll still be a fantastic sight to have No. 27 returning to game action.
Given the amount of time missed and the severity of his injury, interim coach Dave Lowry is planning to ease the 26-year-old back into the flow of things to avoid any setbacks. With that in mind, the electric left-hander will open the night on the club’s third line alongside teammates @Andrew Copp and @Adam Lowry.
Before too long, however, fans should expect to see Ehlers returned to his top-six role, likely positioning him next to Scheifele and @Blake Wheeler.
As for the corresponding move, @Adam Brooks is expected to draw out of the line-up and serve as a healthy scratch during this upcoming contest. Digging deeper, here are Winnipeg’s projected forward lines ahead of puck drop:
@Paul Stastny – Scheifele – Wheeler
@Kyle Connor – @Pierre-Luc Dubois – @Evgeny Svechnikov
Copp – Lowry – Ehlers
@Kristian Vesalainen – @Dominic Toninato – @Jansen Harkins

Unsurprising to most, the combination of Connor, Dubois and Svechnikov has excelled since being reunited and Winnipeg is counting on this recent success to continue against Dallas.
Overpowering opposing defences lately, this trio has connected for six total goals over the previous three games, with Connor and Svechnikov evenly splitting that share during this span. Though Dubois is without an even-strength marker, as expected, he’s remained the driving force of this line and has been one of the key reasons for its success, as he’s posted three primary and three secondary assists.
Despite their recent dominance, remaining productive while facing the Stars’ improved defence will likely be difficult. In total, this opponent has been fairly effective at keeping pucks out of its own net, as they’ve allowed the fourth-fewest goals per game (2.36) among all 32 teams since Feb. 1.
It certainly won’t be a walk in the park, but if the Jets are to come away victorious, they’ll need their best skaters to find a way to break through offensively against this proven adversary.

As everyone already knows, generating offence throughout the final 20 minutes of play is a vital component of hockey, but when it involves Winnipeg and Dallas, doing so has become even more critical than it already was.
Looking at the leaderboard, granted, both clubs are currently positioned outside the top 10 in third-period scoring this season. Having said that, while playing against each other, that’s been a very different story as six of the 16 total goals that were scored between these two teams occurred during the final frame.
Additionally, five lead changes have taken place in the third period across three previous meetings in 2021-22 – that’s a lot of ‘TSN Turning Points.’
If we’ve learned anything from this newly-engaged rivalry, it’s that the Jets nor the Stars are capable of protecting single-goal advantages late in regulation. So, the outcome of Friday’s season-series finale probably won’t be determined until the final horn sounds.
More from Jets Nation:
Uncategorized
Recent articles from Thomas Hall