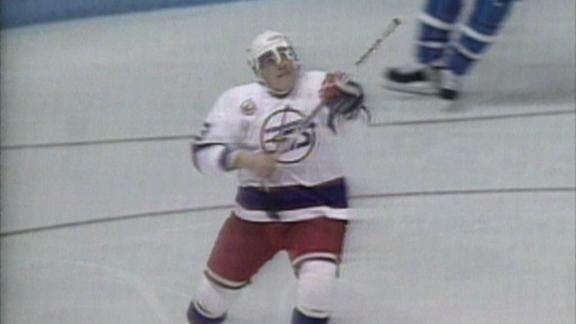 By Zach Laing
9 months ago
Welcome back to another edition of Throwback Thursday!
It was this week in 1993 when Winnipeg Jets legend Teemu Selanne broke the NHL’s rookie scoring record notching his 54th goal of the season.
He did it in incredible fashion on March 2, when in a 7-4 loss to the Quebec Nordiques, Selanne scored a trio of goals with his third being the record-breaker. He broke open scoring in the game just 15 seconds in, before adding one more late in the second at the 16:59 mark.
In the third, the Jets took a 4-3 lead with a Keith Tkachuk goal 1:26 in, before Selanne’s tally at the 9:16 mark broke the record. Despite the Nordiques going on to score four more before the game was over, the night was all Selanne’s.
By the end of the year, Selanne kept pouring on finishing the year with a remarkable 76 goals — a mark he would never quite get close to during the rest of his career. Selanne remained with the Jets for only a few years more before he was traded in a blockbuster to the Mighty Ducks of Anaheim.
Selanne was shipped alongside Marc Chouinard and a fourth-round pick in exchange for Chad Kilger, Oleg Tverdovsky and a 3rd round pick in 1996.
By the end of Selanne’s illustrious 1451 game career, he scored 684 goals and 1457 points placing him 12th and 16th all-time, respectively.
Zach Laing is the Nation Network’s news director and senior columnist. He can be followed on Twitter at @zjlaing, or reached by email at zach@oilersnation.com.
Uncategorized
Recent articles from Zach Laing