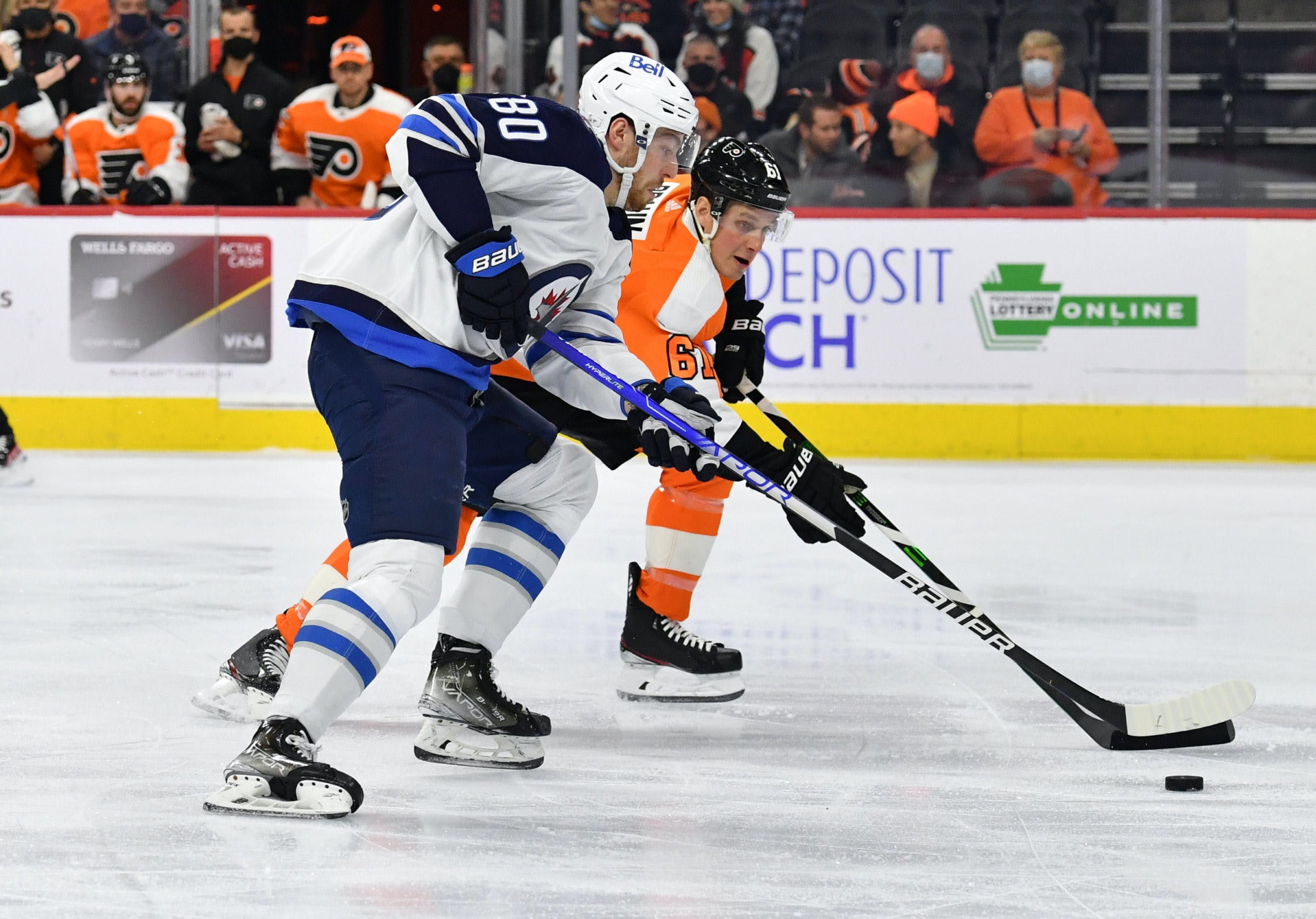 By Angus Hout
7 months ago
I hope you watched that game between the Winnipeg Jets and Colorado Avalanche on Apr. 24. Not only was it the Jets’ first win in four games, but it was also a very entertaining game for all hockey fans. The final score ended up being 4-1 in favour of Winnipeg.
Forward @Kyle Connor became the new record holder for most goals (45) in a single season since relocation, @Connor Hellebuyck secured his 200th career win and @Neal Pionk played his 300th NHL game. It was a big night for the team and individuals alike.
On the betting front, I went 0-for-7 last time out. Not ideal, obviously. Hopefully, the Jets can build off their success against the Philadelphia Flyers and I make smarter bets as this season winds down.

The Jets enter Wednesday’s contest with a 36-31-11 record and 83 points. The team currently sits 19th overall in the NHL.
Back-up @Eric Comrie is expected to make his third start in four games. Overall, the Jets’ backup goalie owns a 14-8-1 record, a 2.72 goals-against average and a .915 save percentage this season.
Winnipeg will be missing forwards @Mark Scheifele (upper body) and @Cole Perfetti (upper body). Defenceman @Logan Stanley will serve as a healthy scratch once again, along with forward @Adam Brooks.
Connor leads the Jets in goals (45) and points (89). He needs just five more goals to reach the 50-goal mark.
Prior to the All-Star break, the Flyers defeated the Jets via a 3-1 outcome. Philadelphia has had the upper hand over the last 10 games between these two franchises, performing to a 5-4-1 record.

What You Need to Know About the Flyers

The Flyers have greatly underperformed thus far and are currently in the midst of a rebuild. This season, they feature an abysmal 25-44-11 record and rank 29th overall in the NHL.
Goaltender @Martin Jones is projected to start in goal. The 31-year-old is looking for his 199th career win during this matchup. In total, he’s posted a 12-17-3 record, a 3.43 goals-against average and a .900 save percentage. In Jones’ previous five starts, he’s 2-3-0 and has allowed 17 goals against.
Philadelphia’s injury list is very long. The team will be without @Nick Seeler (lower body), @Cam Atkinson (lower body), @Carter Hart (lower body), @Rasmus Ristolainen (upper body), @Cam York (lower body), @Patrick Brown (upper body) and @Kevin Connauton (lower body).
@Travis Konecny leads the Flyers in assists (36) and points (52), with @Cam Atkinson and @James van Riemsdyk tied for the most goals at 23 apiece.
Former Jet @Nate Thompson will return to Winnipeg for the first time since departing through free agency last off-season.

I’m betting with PointsBet and so should you! Check out their app, as well, it’s really handy.
Money Line: Jets win in regulation at -131.
Risky Bussiness: @Pierre-Luc Dubois scores first and the Jets win at +1600.
Good Return: @Paul Stastny scores anytime at +270.
Prop Bet: Jets score in every period at +150.
Over/Under: Over 7.5 total goals scored at +175.
Parlay: New York Rangers ML, Seattle Kraken ML and Chicago Blackhawks ML at +897.