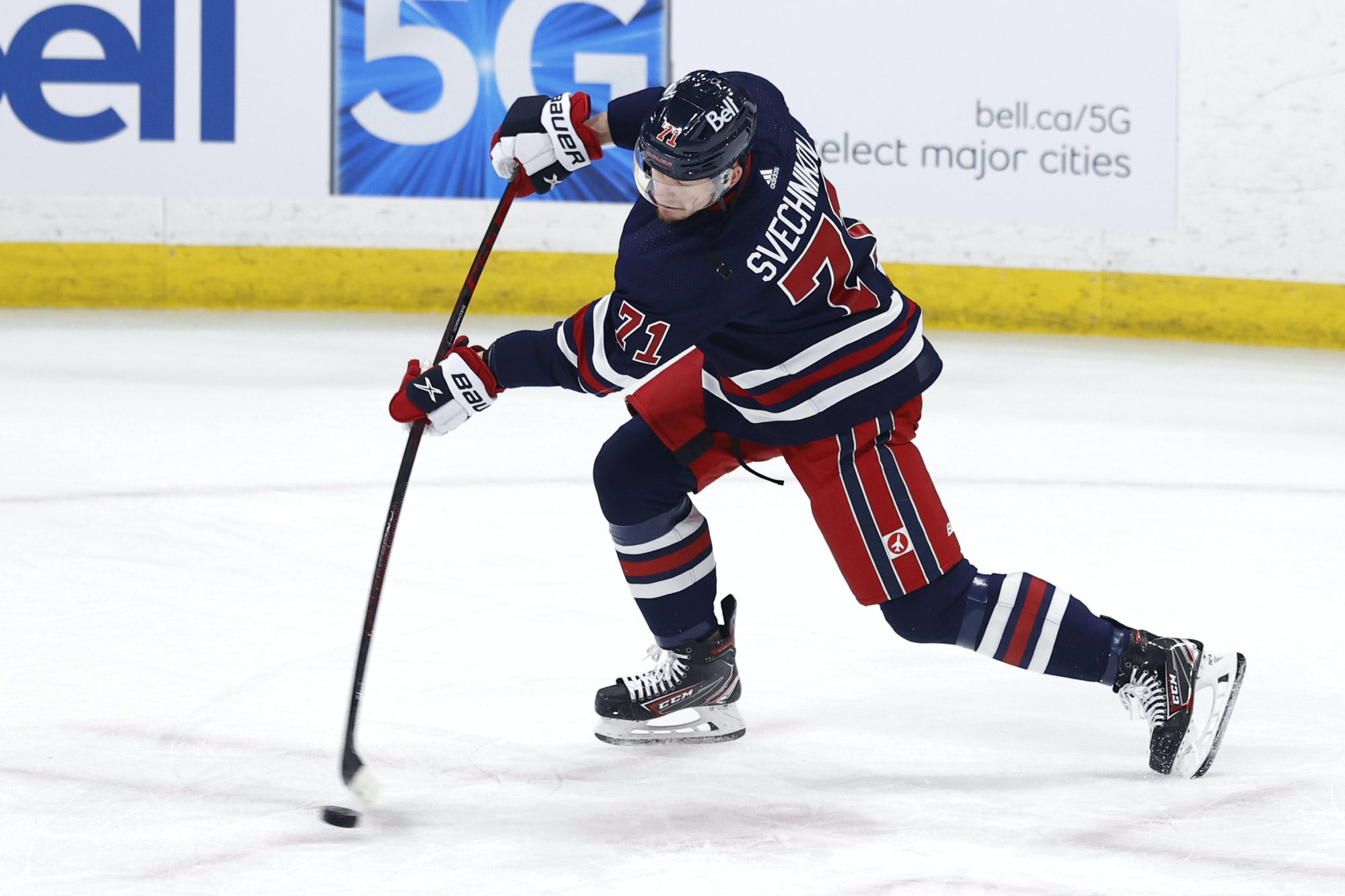 By Colton Davies
7 months ago
It’s become apparent that 25-year-old, Yuzhno-Sakalinsk product, @Evgeny Svechnikov has become one of the Winnipeg Jets’ most under-utilized players this season.
The former 15th-overall pick in the 2015 NHL Draft struggled to find his game with the Detroit Red Wings. He found success in the AHL with the Grand Rapids Griffins, where he amassed 101 points (39 goals, 62 assists) in 186 career games. In 2016-17, he helped guide the Griffins to a historic Calder Cup victory, recording 12 points (five goals, seven assists) in 19 playoff games.
Despite his success in the AHL, he flipped flopped back and forth between the Griffins and the Red Wings. In 41 career games with the Red Wings, he accumulated just 12 points and his time there came to a screeching halt last summer.
In August 2021, he signed a one-year deal with the Manitoba Moose. Then, following training camps, Svechnikov signed a one-year, two-way contract with the Jets that holds a $750,000 average annual value (AAV). Currently, he has 19 points (seven goals, 12 assists) in 68 games and is on a four-game cold streak.
Though, being without a point over his previous seven games can largely be credited to his lack of opportunities as he’s barely seen the ice lately.
Svechnikov’s ice time has been significantly diminished, specifically over the last five games, where he’s seen under 8:00 minutes of ice time on multiple occasions. Interim coach Dave Lowry has yet to make a comment as to what the purpose is behind this setback.
With the Jets officially out of a playoff picture, you’d think playing your younger players would become a priority. Though, we have seen weirder things here in Winnipeg. That deficiency of ice time also has a crucial impact on his development. His average ice time on the season is 10:42, that’s certainly not enough for a player of his calibre. Svechnikov has proved that he’s able to compete at the pro level and there’s still some untapped potential to be unearthed.
This is where the fun stuff comes into play: his analytics. According to Natural Stat Trick, he possesses a 0.992 PDO, a 48.38 per cent Corsi For Percentage (CF%), a 48.4 per cent Fenwick For Percentage (FF%) and a 49.5 per cent Expected Goals For Percentage (xGF%) at 5-on-5. There’s room to improve, but this table shows that Svechnikov does have the intangibles to compete at a high rate in the NHL.
The 6-foot-3, 207-pounder is a smooth-skating crafty offensive winger who has a laser of a shot and some magic hands. What couldn’t you love about his game?
After this season, Svechnikov is slated to become a restricted free agent with arbitration rights. If the Jets can lock him up for under $1.2 million per season, that’s a contract that would be beneficial to both parties, there’s almost zero risk involved. When it comes to putting him in the line-up next season, he did find success on a line with @Pierre-Luc Dubois and @Kyle Connor. That line combined for 16 goals and a CF% of 50.5 per cent.
Since then, you could say the line-up hasn’t seen the same type of chemistry. Svechnikov could find a lot of success on a third checking line with @Adam Lowry, having two net-front bodies could make for a unique combination. Unlike his brother @Andrei Svechnikov, Evgeny will likely not see substantial numbers at the NHL level, but I do believe he has the full ability to achieve 50 points if given the right ice time.
So, if the Jets are able to find the right chemistry once again, the sky is the limit.