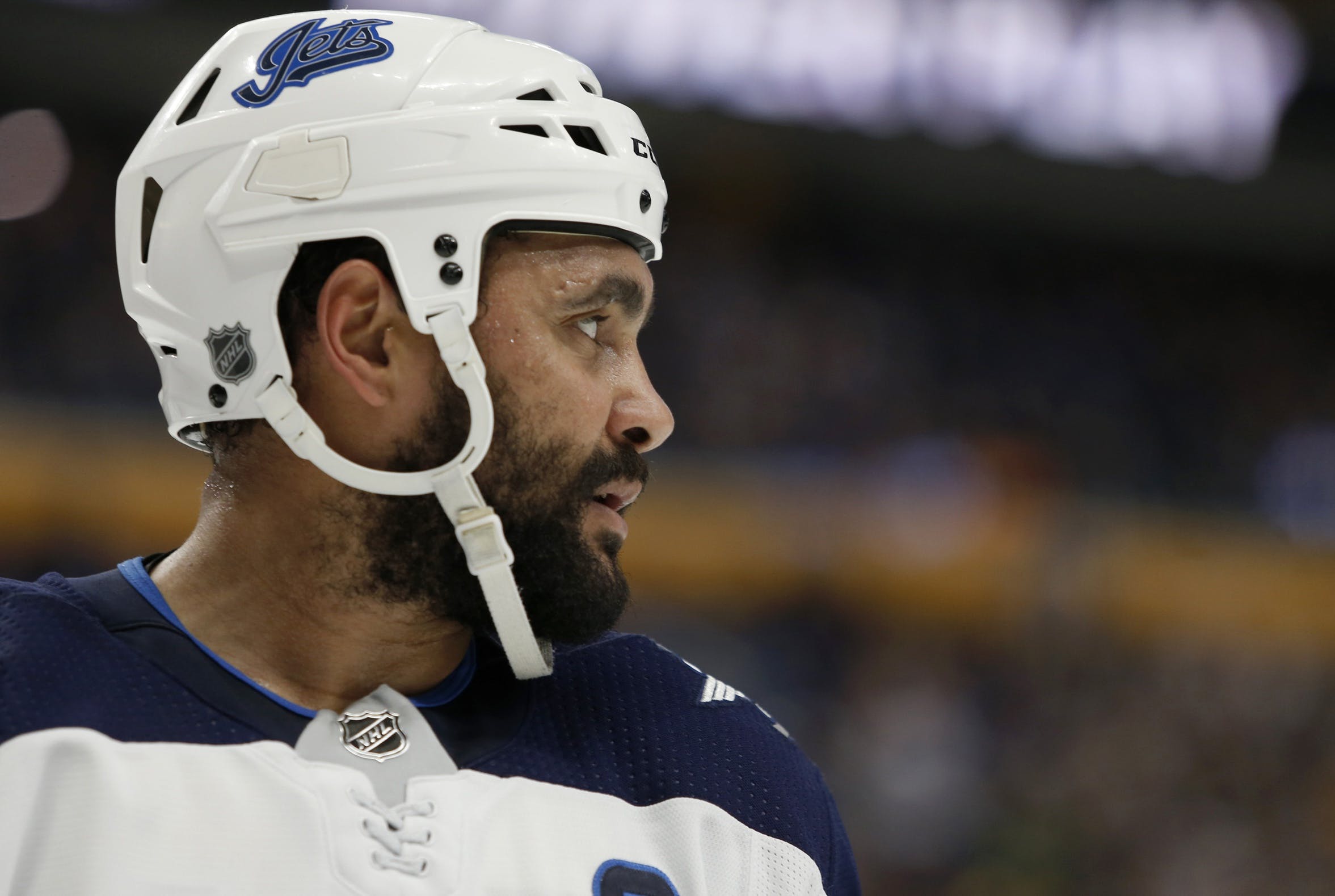 Photo credit: © Timothy T. Ludwig-USA TODAY Sports
By Art Middleton
3 years ago
Comments
As first reported by Bob McKenzie, @Winnipeg Jets defenseman @Dustin Byfuglien has just recently had surgery on his ankle and as it was confirmed later on by the team, he did so apparently without consulting anyone within the Winnipeg Jets organization.

As just reported ono @NBCSN, Dustin Byfuglien recently underwent ankle surgery to take care of unresolved issues from the high-ankle sprain he suffered late last season. What that means for his future and whether it could, in time, lead to his return to WPG remains to be seen.

A Jets team spokesman later confirmed the report, stating that he had the surgery done last week and that while the club was aware that it was an option, there had been no decision made on their end, nor does it seem the team even had a say in the matter.
Advertisement
Ad
Advertisement
Ad

Here's the statement from the Winnipeg Jets regarding Dustin Byfuglien's ankle surgery last week in Minnesota…"We were aware he was contemplating having surgery, but were not directly involved in his decision making process."

UPDATE: Darren Dreger has speculated that Byfuglien could be out as long as four months which means he might not be available until March.

My understanding is Byfuglien had the surgery in Minnesota last week. Loose timeline on recovery, but could be upwards of 4 months.

Just to recap, Dustin Byfuglien came to Winnipeg for the opening Jets camp in September but quickly asked for and was granted a leave of absence from the club. At the time of his leaving, both Jets General Manager Kevin Cheveldayoff along with head Coach Paul Maurice suggested that everything was fine family and health wise and that the typically reserved and quiet Byfuglien simply needed some time away, with Maurice even going as far as to say there was “nothing sinister” about his absence and Kevin Cheveldayoff stating to reporters “Health-wise, everything is good for him and his family.”
Advertisement
Ad
Advertisement
Ad
It wasn’t too long after that some initial suspicions were confirmed as it was reported that Byfuglien was considering his future in the sport of hockey. This wasn’t tough to imagine as the last two seasons has seen Byfgulien deal with some very serious injuries that have kept him off the ice for significant lengths of time. There had also been talk that Cheveldayoff had “talked Byfuglien” out of retirement.
All the while, the Jets continued to express their support for Byfuglien even as they went through the formality of suspending him without pay, stating that they were in constant contact with the veteran defenseman and made sure that it was clear that Buff’s suspension was simply a matter of paperwork and a Salary Cap saving move and that he would be welcome back at any time.
Advertisement
Ad
Advertisement
Ad

There are a lot of open questions now

Byfuglien electing to go ahead with this surgery opens up a few questions on it’s own. Does this mean he is wanting to come back and play hockey? If it does, as some have speculated depending on how severe his injury was and just what type of surgery he had, it’s unlikely that a Big Buff return happens until at least January.
The fact he has seemingly went out on his own without consulting the Jets and had the operation done also raises some hard questions. Were or are Byfuglien and the Jets team medical staff not on the same page when it comes to his injuries? Did he feel as though he had to take matters into his own hands when it came to his health? As noted, when this whole situation first came about, both Maurice and Cheveldayoff almost outright denied that the matter had anything to do with his health.
Advertisement
Ad
Advertisement
Ad
If the Jets were truly unaware of Byfuglien’s injury back in September when he made his request, and if Buff wasn’t at odds with the way the team was handling his medical issues, then why didn’t Byfuglien report it to the club? At the very least the Jets could have placed him on Injured Reserve, thus assuring Byfuglien would still be paid.
In what has been a very crazy beginning to the season, this latest turn in the Byfuglien saga may be the craziest turn yet and begs a lot of questions to be asked of a franchise and player who typically don’t give out many answers.