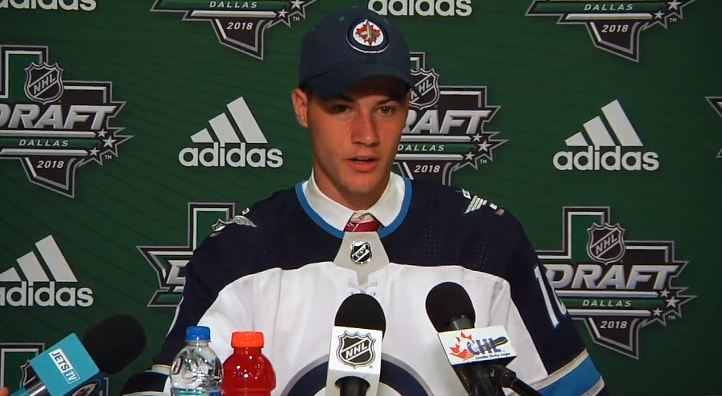 Photo credit: CHL.ca
By Art Middleton
2 years ago
Comments
The @Winnipeg Jets have agreed to terms with @Declan Chisholm as they have signed the 20 year old right handed defenseman to a three year Entry Level Contract. The average annual value of the deal is $825,000 and will begin next season.
As far as his contract  goes, it’s a fairly standard deal with some added bonuses for games played in the NHL should he make it to that level in the 2021-22 or 2022-23 seasons.

Chisholm was the 5th round pick, 150th overall of the Jets back in the 2018 NHL Draft. This past September, we ranked Chisholm ninth in our 2019 Jets prospect rankings. and that was before he had his best season yet with the OHL’s Peterborough Petes where he had career highs in goals (13), assists (56), and points (69) while leading the Petes in each of those categories. Chisholm was also a part of Team OHL in the 2019 Canada / Russia Junior series on November 11.

Declan Chisholm with a nice shot on the PP to tie the game 5-5 for the Petes with 1:24 to go!#OHL pic.twitter.com/Wl5sRdSAMi

Winnipeg signed Chisholm on the day set by the NHL for teams to sign draft picks to ELCs. Players drafted on or before 2018 were set to have their club rights expire at 4:00 PM CST June 1. The Jets had three such players with expiring rights, and while they came to terms with Chisholm, the Jets didn’t sign defensemen @Giovanni Vallati, or @Jacob Cederholm.
Advertisement
Ad
Advertisement
Ad
Cederholm has struggled over the last two seasons dealing with multiple injuries. He was the Jets fourth round pick (97 overall) in the 2016 NHL Draft, and at the age of 22 while there is still a slight chance he improves, it’s not likely at this point and it almost certainly wouldn’t be enough to vault him over the likes of @Ville Heinola, @Dylan Samberg, @Leon Gawanke, Chisholm or @Logan Stanley.
The same can be said for Villati who was also picked in the fifth round of the 2018 NHL Draft, three picks after Chisholm was selected. While Chisholm was selected primarily for his defensive play and has since blossomed into a good two-way player, Villati was picked with the potential of being a two-way defeseman, but has seen his numbers in junior decline since. This past season Villati had one goal and 26 assists for 27 points in 61 games played.
Advertisement
Ad
Advertisement
Ad