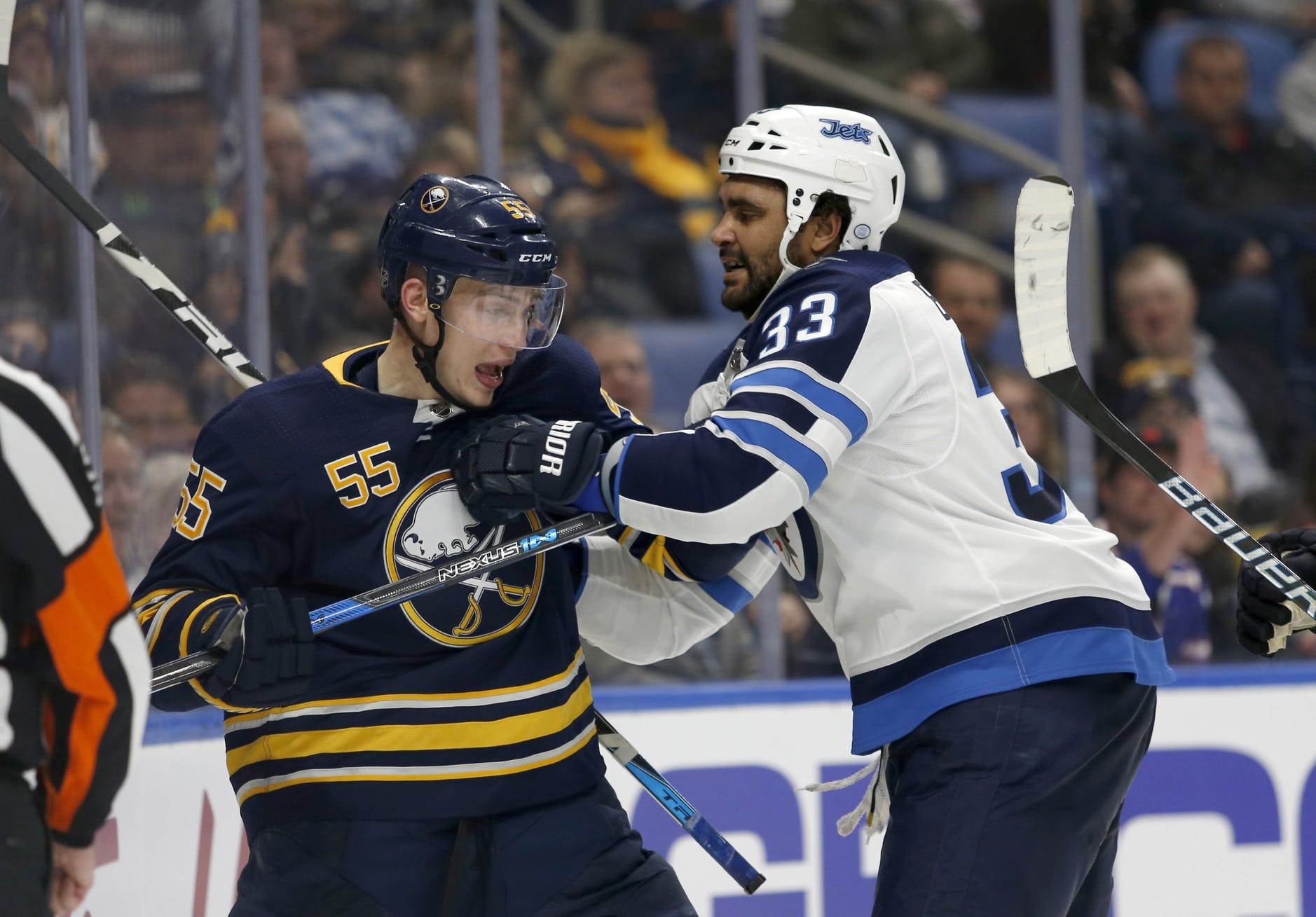 Photo credit: © Timothy T. Ludwig-USA TODAY Sports
By Art Middleton
3 years ago
Comments
Last week the Jets announced that defenseman Dustin Byfuglien was granted a ‘leave of absence’ from the team for personal reasons. While the Jets maintained that they fully supported Byfuglien and that in the words of head coach Paul Maurice there was “nothing sinister” about the absence, a few have speculated about the cause and possible reasons behind it.
Now less than one week after Big Buff took that leave of absence, this little bombshell from TSN insider Bob McKenzie who suggests that Byfuglien’s own hockey future including possible retirement is being considered.

Neither the Jets nor Byfuglien’s agent Ben Hankinson responded to a request for comment.

Darren Dreger added that there is no set timetable for a decision and/or a possible return.

No time table for a decision is an important factor in this story. I’m certain the Jets will give Byfuglien as much time and space as he needs to contemplate his future both on and off the ice. He’s such a big part of the organization. https://t.co/MdX0K7h6qr

First and foremost beyond anything else, what matters is the health and well being of Dustin Byfuglien. If this recent speculation is true – and with multiple sources chiming in on the matter, there is no reason to believe it isn’t – then Buff should absolutely take all the time he needs and if it does lead to his retirement, it would be absolutely understandable considering the wear and tear his body has gone through over a 14 year NHL career. The last two of those seasons have seen him miss significant time due to injuries including leg and head injuries.
Advertisement
Ad
Advertisement
Ad
Not unlike Justin Williams of the Carolina Hurricanes who recently put his career on pause over what he described as “indecision, and without the type of mental and physical commitment that he was accustomed to having” he stepped away from the game for the time being – not outright retiring however.
Dustin Byfuglien could be going through the same emotions himself.
Unlike Williams though, Byfuglien is under contract to an NHL club which is where this does get a bit tricky for the Jets as far as salary cap implications and roster considerations. TSN’s Frank Seravalli did a good and brief recap of those scenarios on Twitter…

On personal leave, Byfuglien could be listed as 'active non-roster' like Nic Petan was last season. He wouldn't take up a spot on the 23-man active roster, but #nhljets would have to account for his $7.6 million hit on their salary cap. [2/4]

Or, of course, if Byfuglien decides to officially retire, his contract would be wiped from books. #nhljets would not have any cap implications and Byfuglien would walk away from the $14 million owed to him over the next 2 season. Also: no signing bonus to claw back. [4/4]

Beyond the Salary Cap considerations is the impact Buff’s departure would have on the Jets roster which has already seen departures of Jacob Trouba, Tyler Myers, Ben Chiarot and Joe Morrow – players who played at least 41 games or more for Winnipeg last season.
Advertisement
Ad
Advertisement
Ad
TSN’s Pierre Lebrun did speculate that if Byfuglien were to go, the Jets might have options to trade for blue-line help.

Faulk and Ristolainen are top 4 RHD that are available for trade and i wonder if the Jets don’t inquire at some point depending on what happens with Byfuglien. I believe Winnipeg is on Faulk’s approved list of teams as part of his modified NTC. So waiving not required. https://t.co/4aO3e2j215

No one said they were great options. Not to mention the Jets would very obviously be negotiating these trades from a point of weakness where other teams could try to exploit a Jets club that is in desperate need of defensive help.
For now, all of this remains speculation while Dustin Byfuglien takes his time to decide what is best for Dustin Byfuglien.
In the meantime, it’s just one more crazy thing to happen to the Jets in a Training Camp that has been anything but quiet or routine.