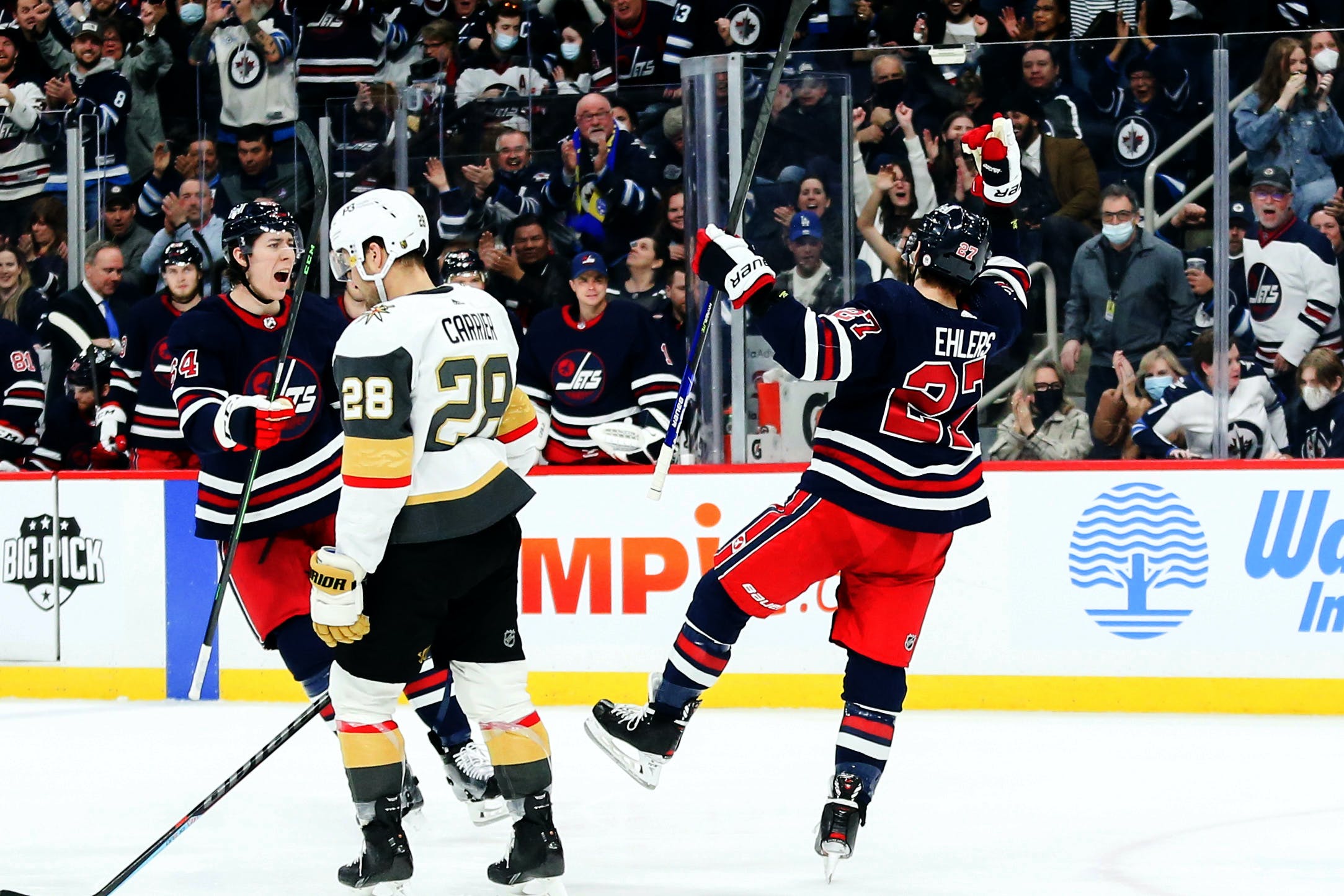 By Thomas Hall
8 months ago
With a playoff spot seemingly in reach, the Winnipeg Jets entered Tuesday’s showdown against the Vegas Golden Knights feeling confident about improving their post-season chances, and thankfully, that’s precisely what they did.
Despite a slow start, which saw the Jets fail to register a single shot on goal throughout the first half of the opening period, things intensified fairly quickly before the first intermission. Receiving a jolt in the arm, this club scored a pair of goals just 33 seconds apart to earn them a 2-0 lead heading into the break.
Even though the Golden Knights opened the scoring in the second period, courtesy of forward @Nicolas Roy, the home team rallied and racked up three unanswered goals before the middle frame concluded. Thanks to markers from @Nikolaj Ehlers, @Mark Scheifele and @Logan Stanley, Winnipeg controlled a 5-1 advantage heading into the final 20 minutes.
There, in typical fashion, this four-goal edge didn’t prove overly safe as Vegas didn’t go away quietly and trimmed its deficit to just 5-3 near the midway mark of the third period. But with a pair of special teams goals – one power play and the other short-handed – another late-game disaster didn’t come to pass.
In the end, the Jets came away with a 7-3 victory and two crucial points in the standings, placing them just two points behind the second wild-card seed.
For an extended recap of this thriller, let’s explore three takeaways from this franchise’s latest win.

Even at 35, captain @Blake Wheeler has still been known to turn the clock back from time to time, and Tuesday’s contest was his most recent example of that.
Desperately needing to generate some kind of offence, Wheeler took it upon himself to put his team ahead on the scoreboard, finishing with one of his most eye-popping goals in recent years. It may have only been his ninth goal of the season but it was definitely a highlight-worthy one.
As veteran @Paul Stastny sent a drop pass to Wheeler, the 6’5″ forward exploded into the offensive zone and shook off defenceman @Alex Pietrangelo with his vision, creating an open shooting lane towards the net. As a result, the right-hander took full advantage and wristed his shot past former Jet @Laurent Brossoit, extending his point streak to five games.
Granted, this play occurred a little while after the home crowd at Canada Life Centre voiced their displeasure at the Jets’ lack of first-period offence, which heard Bronx cheers raining down after recording their first shot on goal. Interestingly, this response had a major impact on the game as it served as somewhat of a wake-up call.
While it aggravated some skaters, just as Wheeler confirmed during the first intermission, it was clearly the motivation this club needed to spark a late scoring push in the opening 20 minutes.

As fans have come to realize, Stanley isn’t someone who shies away from getting his hands dirty, which is something he accomplished in multiple different ways against Vegas.
Looking to spark Winnipeg’s offence in the first period, the 6’7″ blueliner was quick to initiate a fight with Golden Knights forward @Keegan Kolesar – a clash the towering defenceman ultimately won via takedown.
Then, following a five-minute trip to the penalty box, Stanley earned a secondary assist on @Kyle Connor’s 38th goal of the season – completing two-thirds of his Gordie Howe hat-trick. Putting the final touch on this accolade, the 23-year-old capped off his night by potting his second career NHL goal, coming from an unlikely location.
With the Jets controlling possession in the offensive zone, the Kitchener, Ontario, native attempted to cycle the puck down low only to have it returned to him just seconds later. At which point, he maintained possession along the boards and skated towards the left face-off circle before roofing his shot above Brossoit’s shoulder.
What started as a momentum builder for Winnipeg, ended in a memorable night for Stanley, who rightfully earned his first – of hopefully many – Gordie Howe hat-trick.

Of Winnipeg’s seven goals scored, five of them occurred at 5-on-5, with the lethal trio of Connor, Ehlers and @Pierre-Luc Dubois registering a pair of those markers.
Cracking the score sheet shortly after Wheeler’s goal, Dubois impressively maintained possession along the blue line while entering the offensive zone, but had his passing attempt to Connor broken up. Luckily, the bouncing puck ultimately fell to the club’s leading scorer, who didn’t waste his golden scoring opportunity and quickly extended the Jets’ 2-0 lead.
Then, midway through the second period, Dubois escaped one of the several missed penalties on the night, allowing Ehlers to temporarily take over the game. With an open lane insight, the Danish star took full advantage and whipped his shot short side, collecting his 16th goal of 2021-22.
In total, this organization’s second line – which is currently performing as its top even-strength unit – combined for two goals, four points and finished with a team-high 50.2 per-cent Expected Goals For Percentage, according to NaturalStatTrick.com.
It shouldn’t come as a surprise to anyone that this potent line enjoyed another productive showing, especially while facing an injury-riddled Vegas squad. The only shocking outcome from Tuesday’s contest is that this unit wasn’t solely relied on to generate all of this scoring by themselves.
Let’s hope that trend continues.
More from Jets Nation:
Uncategorized
Recent articles from Thomas Hall