Jets feature several identity concerns this season, can they be fixed? 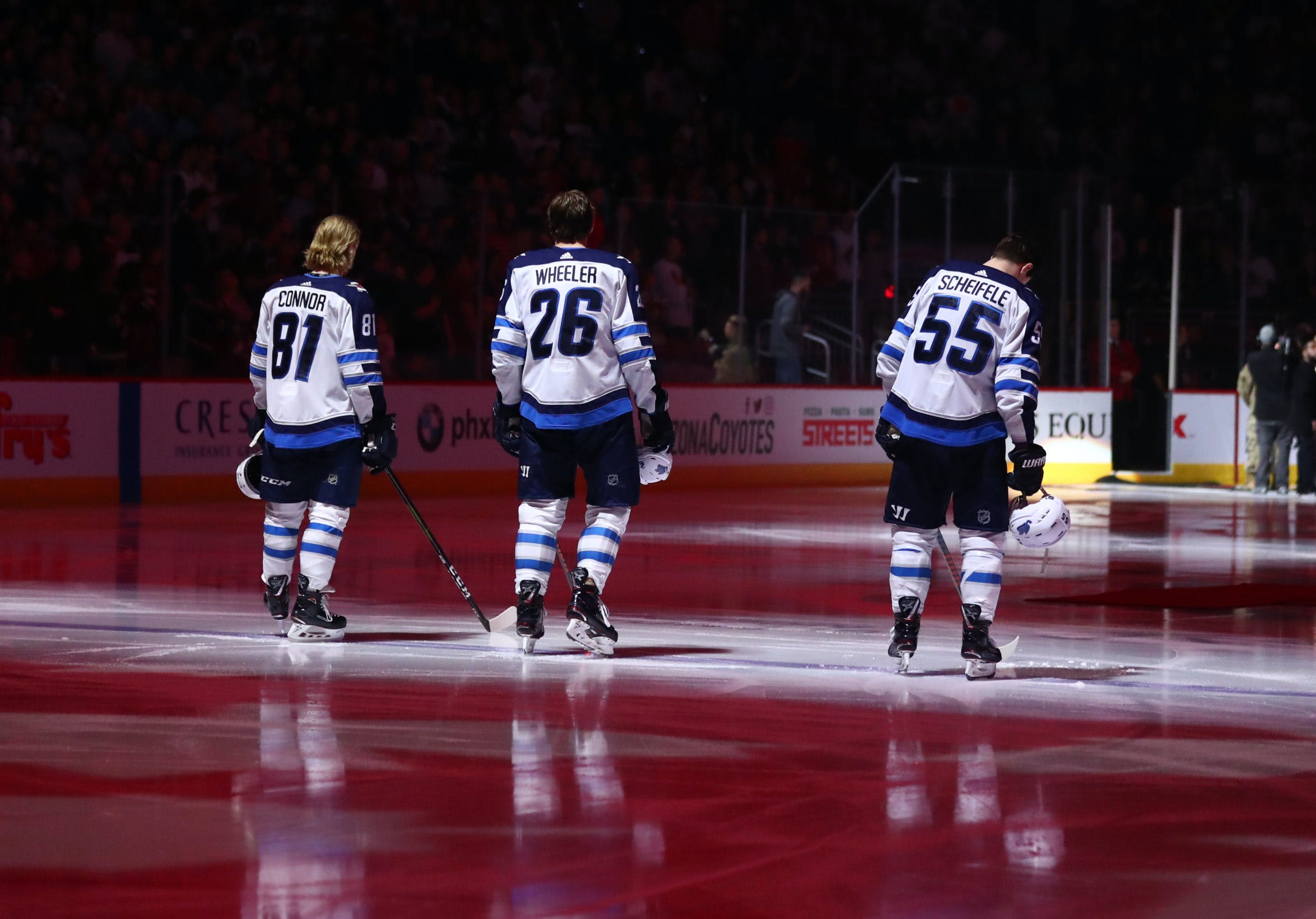 By Angus Hout
8 months ago
Recently, I entered the white-collar working world, and one of the buzz terms that’s constantly thrown around is, “We have a good work culture.”  It makes sense why companies use this phrase, they want everyone to be pulling in the same direction.
How’s this relevant to the Winnipeg Jets? Isn’t this a hockey blog? You’re absolutely correct my friend, I want to discuss the culture – or lack thereof – within their locker room.
In the last couple of months, we’ve heard questions from the media regarding the Jets’ locker-room culture and identity. Four skaters have spoken the most on the topic, including @Mark Scheifele, @Pierre-Luc Dubois, @Adam Lowry and @Blake Wheeler. Arguably, the club’s four most important forwards.
Both Dubois and Lowry figure the Jets don’t have an on-ice identity. Scheifele is also on that same wavelength but believes the mid-season coaching change, COVID-19 and injuries have played huge factors, too. Finally, Wheeler has mentioned that he doesn’t think there’s an issue inside the locker room and is also confused as to why that question continues to be asked repeatedly.
Let’s explore these three angles explore and attempt to determine if there’s anything the Jets can do to help bring a healthy work environment into their locker room.

When the Jets are grooving, they’ll play a full 60-minute performance and can defeat some of the best in the NHL. Case in point, Tuesday’s 7-4 victory over the Tampa Lightning was one of their best wins of the season.
Then there are times where this club performs for half a game and then allows their opponent to get the better of them. Most recently, the Jets played against the Avalanche on Feb. 25, where they led by 3-0 at one point before ultimately falling 6-3.
Like many of you, I’ve noticed that the Jets have been running with half the team on the same page and the other half looking completely lost. Sure, this happens from time to time, but it’s now transformed into much more than just a little slump. Understandably, it’s frustrating to watch so much inconsistent hockey.
This has been Winnipeg’s main issue all season, this team will go on brief hot streaks and then will go ice cold again. There are games where we can see the whole team buying into Dave Lowry’s system, and it’s usually resulted in victories.
On the other hand, most times I don’t think the Jets have totally bought into Lowry’s system, making this season even more mind-boggling.

On Jan. 28, Scheifele was asked if the Jets have an identity and responded with, “Probably not.” At that time, his team was on the back end of a seven-game losing streak, which consisted of multiple key injuries and COVID-19 outbreaks.
It makes sense as to why he was frustrated at the time – we all were. It’s tough to play your best game when there’s so much uncertainty occurring both on and off the ice. Scheifele has been around since this franchise returned to Winnipeg, so he’s seen several people come and go during his time in the NHL.
Perhaps all this turnover, both from roster construction and coaching personal standpoints, is affecting him more than he’s leading on.

Why Does Blake Wheeler Believe This Team Features an Identity?

We’re not in the locker room, so it’s not fair to make any serious assumptions. That being said, it’s a very intriguing question.
On Feb. 26, Wheeler said, “If guys don’t feel like we have an identity, I wouldn’t be sure why we don’t have an identity.” Why doesn’t Wheeler believe there’s a problem inside the Jets’ locker room? I’ve got two deferment ideas on why he thinks this way.
First, perhaps Wheeler has lost the room to someone else and is taking it easy because he possesses a ‘C’ on his chest. The other possible reason could be he doesn’t feel enough accountability is being taken amongst the group, which is what I’m more likely to believe.
If that’s the case, maybe his teammates don’t feel he’s taking enough of the blame for this disappointing season, that’d certainly create tension in the locker room, right? Whatever the real reason is, it must be corrected.

How to Fix This Identity Issue?

It’s really simple, better communication. It fixes so much in today’s world. This will be something I’ll preach until I die. When something is bothering you, talk about it. When someone’s talking with you, make sure you’re listening.
Everyone’s happiness in the locker room and on the ice improves if these instructions are followed. On paper, the Jets should be tearing it up this season, and yet, something appears to be missing in the locker room.
Could better communication resolve this problem? Possibly, it’d at least be a solid starting point.
What’s your take on the Jets’ identity issues? And what would your solution be to this dire concern?
More from Jets Nation:
Uncategorized
Recent articles from Angus Hout