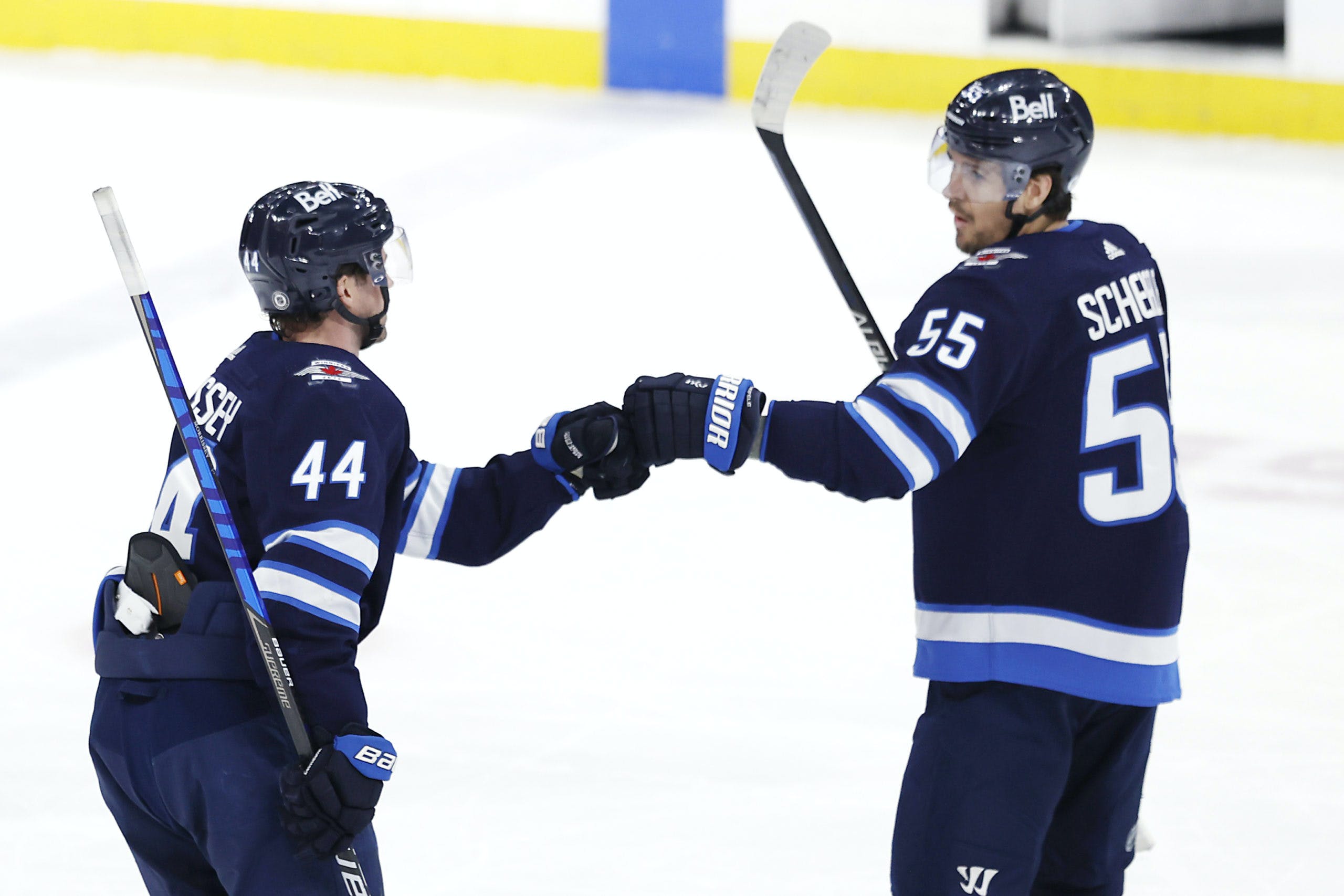 By Thomas Hall
8 months ago
So far this month, the Winnipeg Jets haven’t always been rewarded for performing as the better of two clubs on the night, but while facing the Tampa Bay Lightning on Tuesday, they rightfully earned a much-needed victory over the two-time defending Stanley Cup champions.
Putting the scoreboard to work in the opening frame, the first 20 minutes of play consisted of an enormous amount of scoring for both teams, as they each potted a trio of goals and entered the first intermission tied 3-3. Then, ironically, the second period featured significantly less offensive firepower as the flow of the game became much tighter, keeping the score tied at three goals apiece.
Entering a pivotal third period, Winnipeg’s skaters were determined to come out firing and that’s exactly what they did, which saw three unanswered goals scored by @Pierre-Luc Dubois, @Kyle Connor and @Josh Morrissey. Though Tampa Bay finally cracked the score sheet with under three minutes remaining in regulation, it wasn’t enough to mount a comeback effort.
As a result, this franchise outworked its opponent en route to a well-deserved 7-4 victory – one that earned them two points in the standings, pushing this club up to 60 on the season.
For an extended recap, let’s explore three takeaways from this exciting Tuesday night tilt at Canada Life Centre.

Entering the night, forward @Mark Scheifele had been held scoreless in consecutive games, however, the 28-year-old didn’t waste any time snapping that streak against Tampa Bay.
Striking fast like lightning – no pun intended – Winnipeg arrived ready to play as soon as puck drop commenced, ultimately resulting in an early score from Scheifele. After defenceman @Logan Stanley’s point shot deflected off the crossbar and out, No. 55 quickly jumped on the loose puck and backhanded it past goaltender @Andrei Vasilevskiy.
Though this was Scheifele’s only marker on the night, it wasn’t due to a lack of effort as he registered a hat-trick worth of quality scoring chances in just the first period. Sadly, only one of them snuck by Vasilevskiy, with the others being stopped in highlight-worthy style.
Not to worry, the 6’3″ centre remained productive in other ways, generating a trio of assists – one primary and two secondary.
It certainly wasn’t a perfect showing from Scheifele, who was on the ice for two goals against, but his offensive production far exceeded the other aspects of his craft during this matchup. Still, his value would increase dramatically if he could consistently put together a full 200-foot effort.

Similar to Scheifele, forward @Adam Lowry hadn’t scored a single point in each of the previous two games, although thanks to his strong efforts against the Lightning, he too returned to the score sheet during this clash with the defending champs.
Extending his club’s lead at the 6:11 mark of the opening frame, forward @Nikolaj Ehlers showcased his elite quickness by circling the offensive zone before finding @Brenden Dillon at the point. Once he fired the puck on net, the 6’4″ defenceman’s shot was perfectly deflected in front by Lowry, who was squarely positioned in front of Vasilevskiy.
With the 2018-19 Vezina Trophy winner unable to secure the rebound, Lowry swatted the loose puck into the back of the net, earning the Jets a two-goal edge.
Despite posting just one goal, the 6’5″ centre served as one of the most productive offensive generators, finishing with a team-high four high-danger scoring chances and a 0.78 individual expected goals rate at 5-on-5, according to NaturalStatTrick.com.
Additionally, he also drew a slashing penalty while skating on a breakaway in the second period, which should’ve resulted in a penalty shot. Nevertheless, it provided Winnipeg with a brief 5-on-3 power play – one it couldn’t capitalize on.
Following a fairly quiet first half, Lowry’s second-half surge – that’s consisted of five goals and seven points over his last 10 games – is a very encouraging sign that could potentially signal a strong finish to the regular season.

For most of this season, the Jets have struggled mightily to maintain possession without coughing up costly turnovers and, unfortunately, this issue reared its ugly head once again Tuesday night.
On the Lightning’s opening score, while ushering the puck into the neutral zone, Dubois was attempting to spring @Jansen Harkins as he entered the offensive zone but his pass was intercepted, providing his opponent with a 2-on-1 rush the other way. Taking full advantage of this giveaway, defenceman Ryan McDonagh wired home his third goal of 2021-22.
Committing a similar mistake just over four minutes later, defenceman @Nate Schmidt tried flipping the puck out into the neutral zone to Connor, although his pass didn’t reach far enough and resulted in another turnover. Shortly after, the Lightning embarked on a 3-on-1 rush before @Alex Killorn potted his club’s second marker of the contest.
Adding to Winnipeg’s sloppy defensive performance, while narrowly leading 3-2 near the end of the first period, forward @Andrew Copp decided to cut off @Nikita Kucherov as he attempted to skate down the wing, leaving the middle unguarded. Consequently, Kucherov handed off possession to his lead blueliner, @Victor Hedman, who possessed plenty of room to work and tied the score at 3-3 with a blast from the slot.
It’s defensive breakdowns like these that cause coaches to pull their hair(s) out in frustration. Unfortunately, these kinds of situations have become far too common for the Jets this season, and will need to be corrected moving forward.
More from Jets Nation:
Uncategorized
Recent articles from Thomas Hall