The Winnipeg Jets need to deal with their log jam 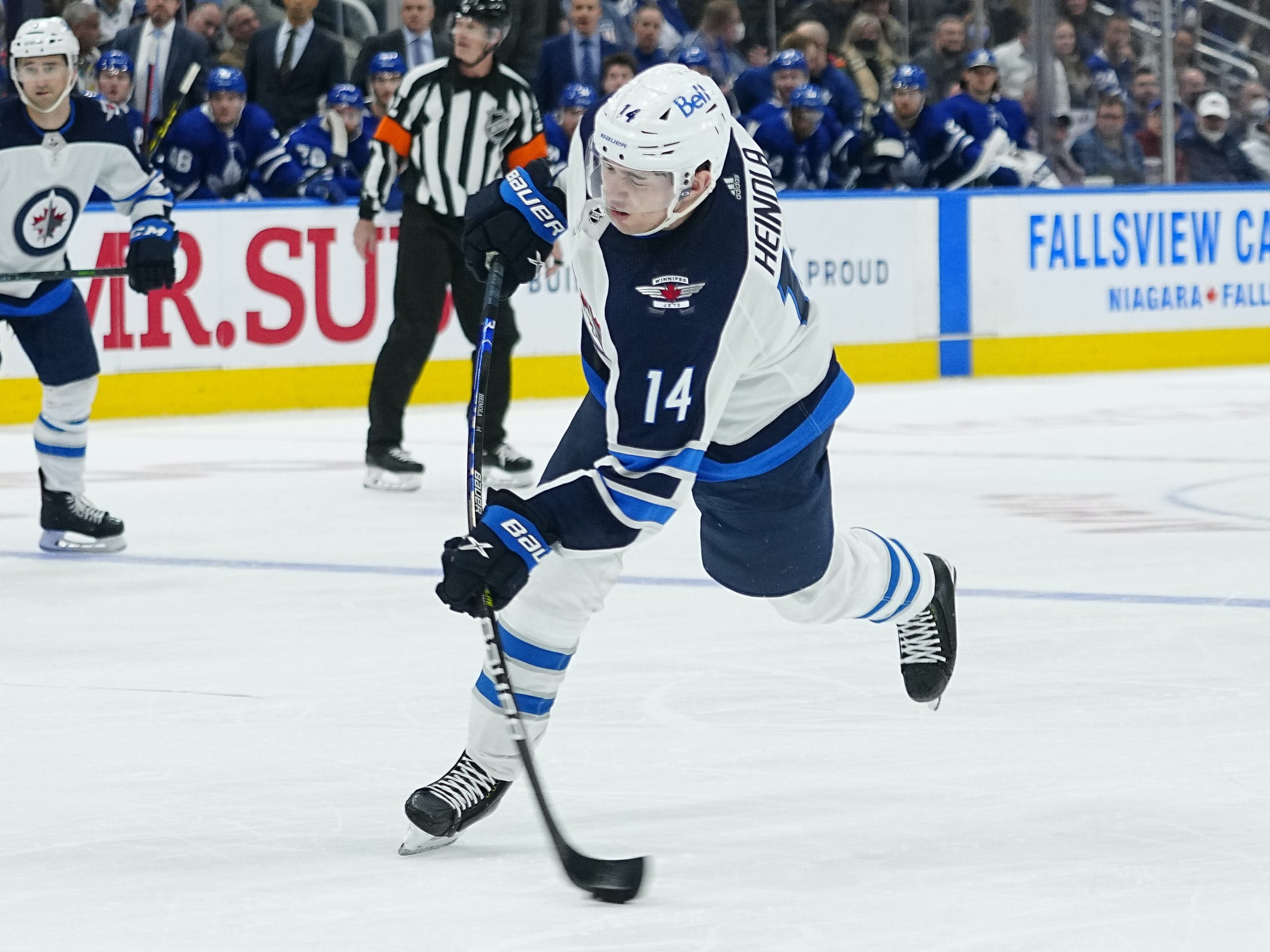 By Angus Hout
1 month ago
Welcome to Jets Nation brought to you by NHL odds site Betway!
The Winnipeg Jets have a massive log jam with the defence, especially when you look at their young defenders. Right now the Jets have five players who could play the sixth D-spot. Logan Stanley, Dylan Samberg, Ville Heinola, Kyle Capobianco, and Declan Chisholm are all more than capable to play on the third pairing of the Jets.
As of right now, we have only seen Stanley and Samberg play in that spot this season. With Stanley on the injured reserve we should see a young Heinola seeing some ice time in the NHL and yet we haven’t only Samberg has been playing in the six defenders spot.
On November third Hienola’s agent, Allain Roy told The Hockey News “I think everybody in hockey that has seen him play realizes he’s now at the point where he Has made a NHL Regular expendable”. It’s absolutely true the Jets have started to waste some talent in the AHL. Heinola wasted away in the press box during the shortened 2021 season. Last season Heinola got in on 12 games last season. He wouldn’t see NHL ice until January 25th when the Jets would fall to the Presidents’ Trophy winners the Florida Panthers.
How do the Jets deal with this log jam?  While Logan Stanley is out on the injured reserve bring Heinola up to the Jets and have him and Samberg play in a rotating schedule. It keeps both men going and allows them to see ice time in their young NHL careers. Both guys can get paid an NHL salary and it keeps player’s happy it also allows the Jets to showcase both players.
Why would the Jets want to showcase their young defencemen? One way to open things up is a trade. The Jets have something a lot of teams are looking for and they are willing to pay a good price for it. That thing is young defencemen who are NHL-ready.
Right now the Jets have talent with a ton of potential but nothing to really show for it. So to avoid being ripped off the Jets should show off what they have to get maximum trade value.  There are plenty of teams who need to shore up their defence especially if they want to make a playoff push, or just simply want to contend for a playoff spot.
On October 31st’s episode of 32 Thoughts, the Podcast Elliotte Friedman would comment on the Jets log jam. “Just something I was looking out for. You know, Winnipeg has a lot of D and I think there’s been some talk ‘do they clear up the logjam’. Do they make some moves to sort of free it up a bit. I think teams have called them, teams that are short on D, I think have called Winnipeg and said ‘what are you doing?’. I think what they’ve told people is they’re not going to do anything just for the sake of doing it. They understand there is interest, and maybe some guys would like to play more, but they are determined to do what they think is best for themselves.”
When we get to the point of the season when Stanley returns from injured reserve the Jets should send Hienola down to the Moose and let him crush it there again and see if you can move the lesser defender between Hienola and Samberg. I think there’s too much potential for Stanley he’s only played 100 NHL games and the Jets don’t have time to wait so one of Heinola or Samberg needs to go. I like all three of the players but right now there are too many of these guys who are fighting for the same spot and one of them needs to go. You can’t have one be an AHL all-star, one be in the press box 60 nights of the year and one get to play 13 minutes a night until he’s comfortable.
The Jets should be trading for a middle-six centerman. The faceoff dot has been a point of concern all season long. I’ve spent the last month ranting and raving about the lack of faceoff success. The Jets are in the basement of the NHL when it comes to their faceoff winning percentage. It’s the 28th worst in the NHL and could easily fall to 30th with another bad game in the dot. The Jets need help with faceoffs and trading a young defenceman can cure that ailment.

Is this bad team management? I think the Jets have mishandled only one of these young defenders and that happens to be Heinola. Heinola got a fair eight games to play in during the 2019-2020 season. He would only play in eight games that season so he wouldn’t have a year count against his entry-level contract.
During the shortened 2020-2021 season, Ville would waste way in the press box and would only play in five games and last season during the 2021-2022 season he would only get in on 12 games. He would only get in on four straight games.  Heinola has a good reason to want to play in the NHL he has been strung along with the Jets and hasn’t had a fair chance with the big club.
It hasn’t been great management of the Finnish-born defender. He should have spent the last two seasons down with the Manitoba Moose. He would have had a real chance to work on his game and simply be better than a third-pair defenceman. The Jets have messed up with Heinola but there is still a chance for him to prove he is an NHL-ready defender for the Jets.
Maybe the expectations are too high for Ville. He was a first-round draft pick in the 2019 NHL draft. Currently with the Manitoba Moose Chisholm who is Heinola’s partner in the AHL is a fifth-round 2018 pick and has seven points as an offensive defenceman where Heinola only has four.
Chisholm has had tons of time in the AHL and has seen tons of ice time where Heinola hasn’t. What would life be like for Ville if he was drafted in the second round rather than the first?
If the Jets don’t do something soon we could watch another defender leave the organization after they took all this time, effort and money to get them up to the point of being an NHLer. If the Jets continue to sit on their hands they might lose more young guys to the waiver wire like Johnathan Kovacevic.
The Jets also need to consider the fact that Chisholm is getting better every day with the Moose and is going to be ready to push for an NHL spot as soon as next season. This log jam needs to be dealt with now or there will be some very frustrated young players who will move on and will have Winnipeg slotted as a place where they need to play their hearts out just to show they were not worth being cut.
What do you think the Jets need to do to deal with their issues with too many defenders? Do the young guys just need to shut up and wait patiently to play for the Jets? Or should the Jets trade a player to shore up their offensive needs? Let me know in the comments.
Editorials
Recent articles from Angus Hout