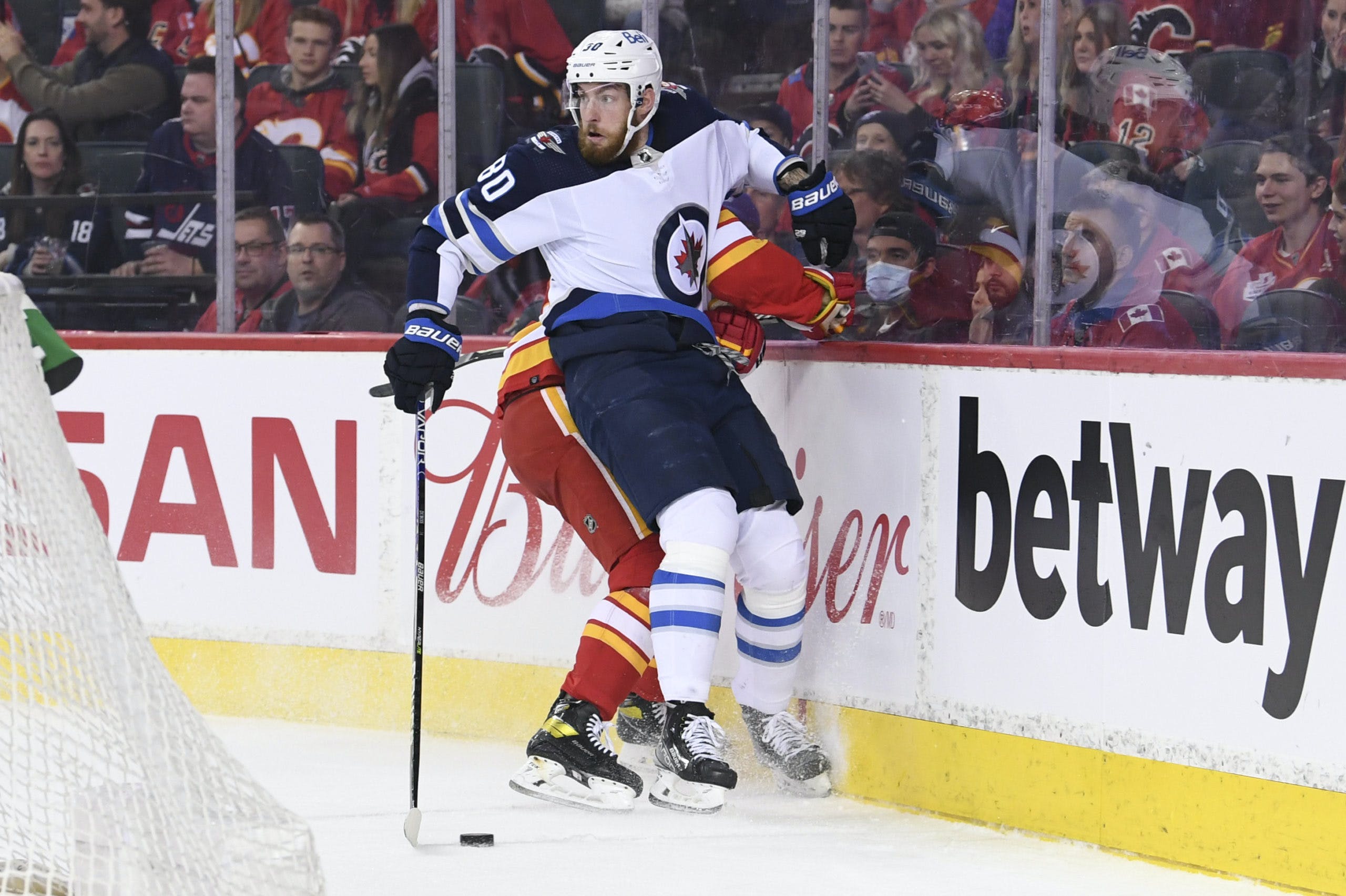 By Thomas Hall
9 months ago
Coming off an unsuccessful comeback attempt against the Edmonton Oilers, the Winnipeg Jets will hit the road for four games, starting with an afternoon showdown at the Scotiabank Saddledome.
Set to meet for just the second time this season, the Calgary Flames enter this matchup leading the Pacific Division with an impressive 29-13-6 record and 64 points. As for Winnipeg, well, this club currently trails the Los Angeles Kings – who own the second wild-card seed – by seven points.
Luckily, the Jets were victorious in their first bout against the Flames on Nov. 27, where forward @Kyle Connor’s two-goal performance ultimately led them to a 4-2 win. This time around, however, their opponent will likely prove to be much tougher to defeat, as they’re currently riding a nine-game winning streak.
For a preview of this contest, here are three skaters to watch as Winnipeg attempts to return to the win column on this holiday Monday:

Last Game: One shot, one block, 22:11 minutes
After opening the unofficial second half on a five-game point streak (seven goals, 11 points), forward @Mark Scheifele has since been held off the score sheet in consecutive contests. But against Calgary, this could be the perfect time to snap his mini-scoring slump.
Over 27 career games against this opponent, the 28-year-old has enjoyed a considerable amount of success in the past, where he’s posted nine goals and 21 points. Collecting one of those 21 markers during the first meeting of the season, the 6’3″ centre earned a secondary assist on Connor’s game-winning score, proving to be a factor in his club’s winning effort.
Based on Scheifele’s career results against the Flames, paired with his second-half surge, it’s probably safe to assume he’ll be worth keeping an eye on throughout this afternoon showdown.

Last Game: Three shots, two hits, 21:36 minutes
Preparing to face-off against Calgary’s potent offence, Winnipeg must receive strong performances from its top two centres, especially when it comes to @Pierre-Luc Dubois.
While Scheifele may receive more ice-time, Dubois has quickly emerged as the team’s most reliable two-way centre in 2021-22, as he’s consistently served as a difference-maker in all three zones. Recently, the 23-year-old hasn’t been significantly lighting up the scoreboard, recording just two goals over his last five games, however, his 14 shots on goal during this same span should bode very well in this contest.
Granted, the 6’3″ power forward will be without a key member of his even-strength unit, @Cole Perfetti, who’s recovering from an upper-body injury. Still, with Connor on his left, this duo remains extremely dangerous against any opponent.
Since Perfetti is unavailable, Dubois is expected to welcome a new forward to his line as @Adam Brooks is set to make his Jets debut Monday. Though a questionable decision, it’ll be very interesting to watch how the Winnipeg native responds to this golden opportunity.

Last Game: One assist, one shot, four hits, 25:49 minutes
With the Jets searching for another crucial victory, they’ll need another solid performance from one of their top defencemen, @Josh Morrissey, who’s been key on the backend recently.
Helping lead the charge in his team’s comeback effort Saturday, the 26-year-old was making his presence felt all over the ice, particularly in the third period, where he earned a primary assist on Connor’s 29th goal of the season. Continuing to step up for his club, the left-handed blueliner has now collected one goal and five points over his last five games, which is a stretch he’ll hope to sustain on Monday.
Though Winnipeg doesn’t receive much offensive production from its defence, when it comes to Morrissey, the former first-round selection is finding ways to make an impact at both ends of the ice.
More from Jets Nation:
Uncategorized
Recent articles from Thomas Hall