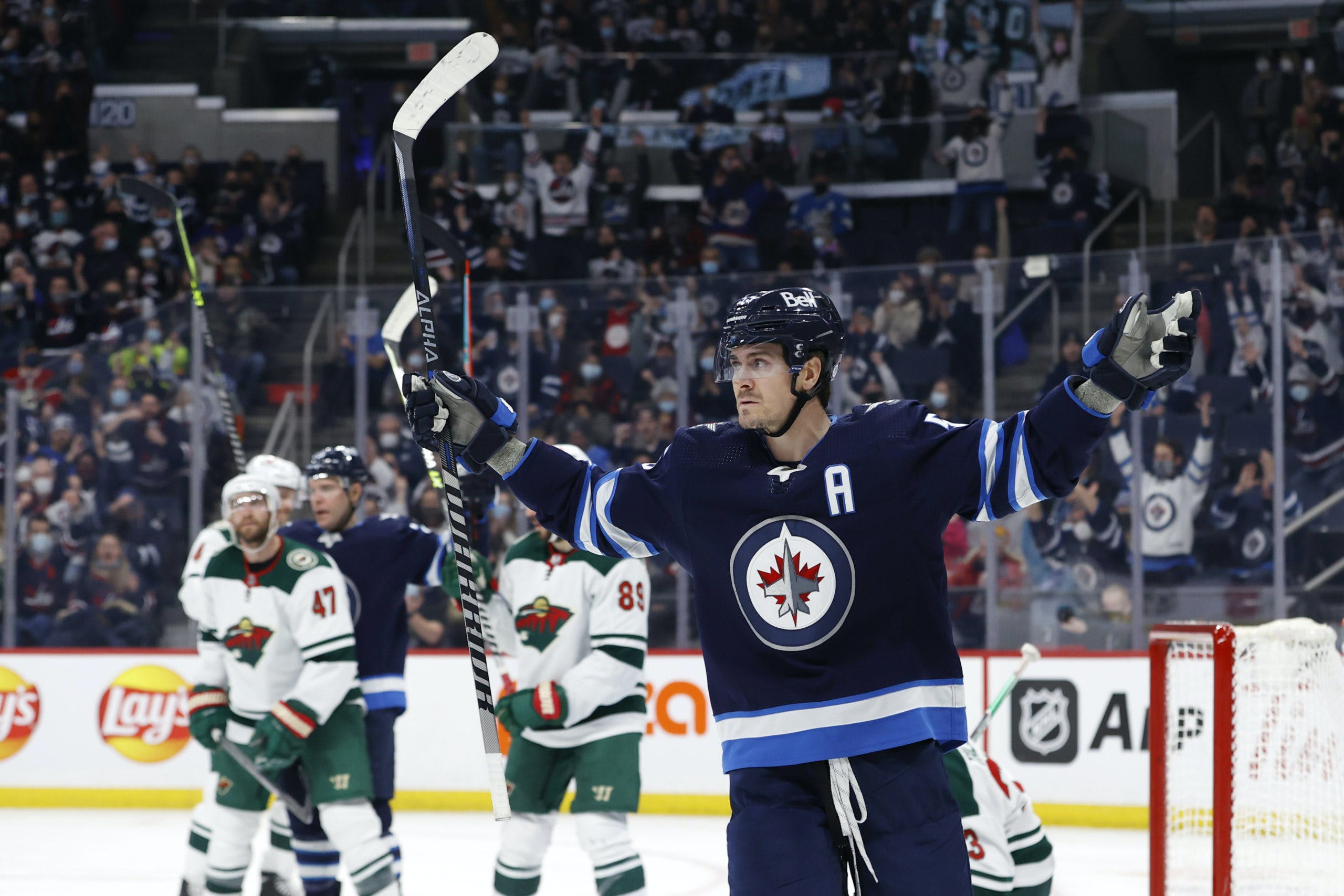 By Thomas Hall
9 months ago
Meeting for the final time this season, the Winnipeg Jets and Minnesota Wild faced off at Canada Life Centre on Wednesday, making for what was expected to be a thrilling conclusion to this season series.
Though no fireworks occurred, instead, an impressive offensive display was showcased by the home team over the final 40 minutes of play.
After surrendering the game’s opening goal in the first period, Winnipeg answered back with a pair of unanswered markers in the middle frame, both of which were courtesy of forward @Mark Scheifele. Then, in the final 20 minutes, Scheifele completed his hat-trick and also saw three of his teammates (@Cole Perfetti, @Kyle Connor, @Paul Stastny) crack the scoresheet, as well.
In the end, despite allowing two goals in that same period, the Jets’ skaters didn’t break and ultimately came away with a much-needed 6-3 victory. With the second half of this back-to-back series up next, a second straight victory, paired with a loss from the Anaheim Ducks, would suddenly position this club just three points shy of the second wild-card seed.
Wouldn’t that be an interesting development?
Digging deeper into this recent contest, let’s explore three takeaways from Winnipeg’s strong performance over Minnesota.

Through the first half of the schedule, most of the discussion revolved around the lack of offensive production from captain @Blake Wheeler and Scheifele. But recently, these two stars have been anything but ineffective on the scoreboard.
Heading into Wednesday’s showdown, Wheeler had posted two goals and six points in four games since the All-Star break, with Scheifele generating four goals and seven points during that same span. Continuing their hot stretch against the Wild, both skaters enjoyed extremely productive showings and connected on four separate scoring plays.
In total, Winnipeg’s captain earned two primary assists and one secondary on Scheifele’s hat-trick performance, with both of his primary helpers resulting in one-timer goals for No. 55.
Adding to their stellar point totals on the night, Wheeler and Scheifele connected with each other once again late in the third period, as their give-and-go passes helped spring Stastny along the boards for an empty-net goal at the 17:50 mark. On the play, both players notched their fourth point of the game, tying themselves for the team lead in that department.
In a game the Jets desperately needed to win, they weren’t solely dependent on just one line generating consistent offensive pressure, which is something that’s occurred far too often this season. If this club is to make a surge towards the post-season, this balanced scoring approach must continue.
For Wheeler and Scheifele, even with both of their names currently being speculated as trade bait, they each appear rested and recovered to remain on this impressive post-All-Star break run.

Amid Wheeler’s and Scheifele’s strong offensive display, the Jets also received key performances from Connor and Perfetti on Wednesday, particularly in the final frame.
Less than two minutes after the Kitchener, Ontario native completed his hat-trick, Winnipeg continued pouring on its efforts in the offensive zone and added to its lead even further, as Perfetti redirected a point shot from defenceman @Nate Schmidt to score his second NHL goal. (Video courtesy of Hockey Daily 365)
Now controlling a 4-1 advantage, Minnesota’s skaters refused to admit defeat and stormed back with a score of their own, as forward @Mats Zuccarello perfectly wired his shot past goaltender @Connor Hellebuyck to trim his team’s deficit to two goals.
Luckily, two of the Jets’ top forwards, Connor and Perfetti, helped restore their three-goal edge at the midway point of the period. As the 20-year-old rookie created a turnover in his own zone, he quickly ushered the puck up the ice where he found his elite goal-scoring teammate, providing him with a clear breakaway chance that he made sure not to waste.
Thanks to each of these markers, this team wasn’t phased by a late score from former Jet @Dmitry Kulikov – who’s now scored two goals and 14 points against the organization that he spent three seasons with from 2017-2020.
As has been the case for most of 2022, Connor and Perfetti – along with @Pierre-Luc Dubois – continue to impress each day.

At this point, almost everyone should be aware of Hellebuyck’s most obvious weakness, his puck handling. Far too often, skating outside his crease becomes very problematic, and that was almost the case yet again Wednesday night.
On the surface, stopping 33 of his 36 shots against served as another quality showing for the 28-year-old goaltender, earning him his 17th victory of 2021-22. But if not for some favourable bounces, his results certainly wouldn’t have fared as well as they did.
Unofficially, Hellebuyck endured four misplays while playing the puck from beyond his crease, three of which resulted in empty-net chances for the Wild. Thankfully, none of them were converted on as the 6’4″ netminder escaped disaster each time.
Since he hasn’t always been this lucky in the past, it might be worth exploring a new strategy moving forward, perhaps one that reduces the amount of time provided to him while possessing the puck.
More from Jets Nation:
Uncategorized
Recent articles from Thomas Hall