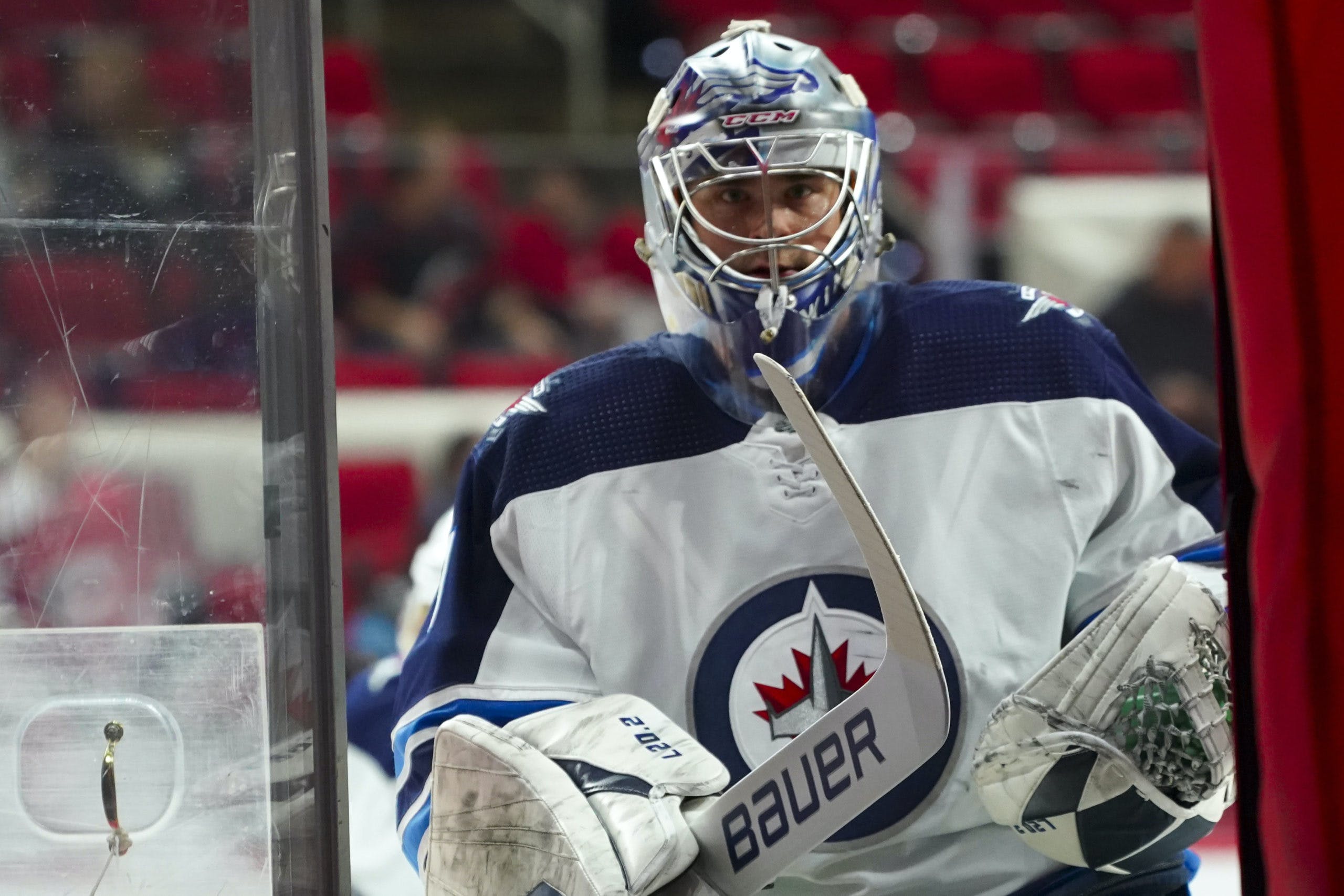 By Thomas Hall
6 months ago
Heading into what’s expected to be a pivotal summer in Winnipeg, the Jets will have plenty of important decisions to make involving their player personnel, including back-up @Eric Comrie.
With goaltender @Connor Hellebuyck signed through 2023-24, management shouldn’t have to worry about its starting goalie position over the off-season. But the same can’t be said about the club’s reserve spot. After losing @Laurent Brossoit in free agency last summer, a similar outcome could potentially occur with Comrie this time around.
The soon-to-be 27-year-old completed his one-year, $750,000 contract this past season and will be searching for his next deal in the coming months. Originally, he was ticked as a restricted free agent, however, that’s no longer the case.
By rule, if any goaltender by age-27 doesn’t possess 28 career appearances or more that span at least 30 minutes, they no longer feature restricted free-agent status and become a UFA 6. Unfortunately, Comrie missed this requirement by just three starts – another example of poor mismanagement by the organization.
As a result, the Edmonton, Alberta, native is slated to hit the open market when free agency begins on Jul. 13, 2022. According to Sportnet’s Elliotte Friedman, Winnipeg’s back-up netminder could attract plenty of interest across the entire league, which could increase his asking price.
Who wouldn’t want to seriously pursue Comrie? After all, he’s coming off a breakout performance where he enjoyed the best statistical performance of his career. An outcome that almost no one envisioned leading into the 2021-22 campaign.
Previously, Comrie had only recorded eight career NHL starts – five of which came during his first tenure with the Jets. That small sample size made the fan base skeptical of his ability to serve as a reliable back-up to Hellebuyck this past season. In typical hockey fashion, though, he proved more than capable in that role. Because of course he did.
Through 19 appearances, the former second-round selection performed to a 10-5-1 record, a 2.58 goals-against average and a .920 save percentage. Both metrics finished as the best of his career.
Without question, the highlight of Comrie’s season came on Apr. 25 against the Philadelphia Flyers, when he stopped all 35 shots against and earned his first-ever NHL shutout. It was a well-deserved accomplishment, especially as someone that’s been claimed off waivers four separate times since 2019.
Following this performance, it’s probably safe to assume his days of bouncing around on the waiver wire are probably finished. As they should be. He’s no longer a fringe player at this level, and the advanced metrics back that up, too.
Overall, Comrie allowed 44 goals this past season, although he was expected to surrender 54.3. That means he saved 10.3 goals above expected, which ranked 13th-highest among all qualified goaltenders (min. 15 games), according to MoneyPuck.com.
Also, the 6’1″ netminder posted a .955 save percentage on unblocked shot attempts and a .944 expected save percentage during those same situations. That’s a difference of .011 points. The only other goaltender in the league that featured a higher differential was New York’s @Igor Shesterkin (.012).
Here’s another eye-opening statistic: Comrie’s 2.58 GAA was 0.60 points better than his xGAA (3.18). Once again, Shesterkin – who featured a 2.07 GAA and a 2.74 xGAA – was the only netminder that finished with a higher differential (0.67).

Credit: James Guillory-USA TODAY Sports
It’s truly baffling as to why the Jets didn’t play Comrie more than 19 times in 2021-22. If they had, he almost certainly would’ve earned RFA status and wouldn’t be headed to the open market in a few months. But alas, here were are.
After earning $750,000 this past season, there’s no doubt he’s destined to receive a sizeable raise this off-season. But will it come from Winnipeg? Or perhaps from another franchise?
As currently constructed, the Jets are projected to own approximately $16.19 million in available cap space next season, according to PuckPedia.com. More than likely, at least half of that amount will probably be spent towards extending centre @Pierre-Luc Dubois, who’s tabbed as an RFA with arbitration–eligibility.
If so, that’d leave just $7-$8 million to round out the remainder of Winnipeg’s roster. Having said that, trading @Mark Scheifele and a veteran defenceman would clear additional space that could be utilized elsewhere. Either way, the front office will have to be strategic with how much they offer Comrie.
A comparable contract could be Brossoit’s two-year, $4.65 million that he received from the Vegas Golden Knights last off-season, which features a $2.325 million cap hit per season. Still, even at that figure, there could be plenty of competition for Comrie’s services.
On the surface, the most obvious suitors – aside from Winnipeg, of course – could potentially include the Edmonton Oilers, Pittsburgh Penguins, Chicago Blackhawks, Detroit Red Wings, Buffalo Sabres and possibly the Toronto Maple Leafs if they can trade @Petr Mrazek and his expensive contract.
But if the Jets can’t retain Comrie, they’ll be forced to replace Hellebuyck’s back-up for a second straight summer, which wouldn’t be ideal.