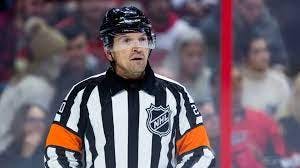 By Angus Hout
1 year ago
Last Tuesday, Tim Peel said the phrase, “I wanted to get a f—–g penalty against Nashville.” I’m sure almost everyone who’s been a referee has said something similar – you just want a make-up call to make things right in the game. It makes sense, referees are human just like you and me, they don’t want to seem unfair and they want the game to be as even as possible.
That’s also a problem, there’s a dislike for certain guys on the ice. So you favor others or turn your head away from a problem and ignore something because you don’t like someone. I’m not saying refs are bad for this, I’m just saying they’re human and we have those moments of weakness even at work. So how does the NHL work at getting better at officiating? There are a few ideas… but it could mess with the flow of the game, although I think it’s important to call the game fair, even if one team gets 16 power plays and the other only gets two. It sucks but there has to be an incentive to playing fair.

First thing, I would mic-up both the Command Center in Toronto and the ref’s telephone at the stadium. When there’s a goal that is being reviewed, it should earn respect between the players, the fans and the refs. Going way back to the 2004 Stanley Cup Finals, a goal wasn’t counted for the Calgary Flames even though the puck crossed the goal line, this disallowed goal cost the Flames the Cup. For Flames fans, I know that still gets them mad.
My buddy Randy has always said, “If I knew what they were thinking at that time, I probably wouldn’t be upset about it 16 years later.” That’s fair because there was no real review and if you don’t know what the refs are thinking you feel way more upset about how a goal is called. If your parents have ever pulled the “because I said so” card on you, it’s basically the same thing as a ref saying the Command Center and I say so. Keep it simple and tell us exactly why you’re allowing or disallowing a goal.
One other thing, I would also like to see coaches challenge penalties, where only the head coach can call out a penalty. Similar to the coaches challenge in the NFL and CFL with a few different rules. If the head coach watches something happen to one of his players and the refs don’t call it, then the coach has 10 seconds to call it in. They can only do it once a game and if they’re wrong they’re given a penalty.
How would the head coach make this call? They should have a mic they can turn on and off that can go up to the person who operates the horns in the building, allowing him/her to get a horn to go off and that will end play. The coach can say what he thinks was missed and the refs will review it and can either dub it a penalty or not. Now, this can also go for a bad call which would be a lot harder to call, but if there’s one way to fix that it’s having a mic connected to a phone call between the Command Center and the refs, that way we know what they’re thinking.
It sucks watching guys like @Connor McDavid or @Sidney Crossby get hooked, held tripped and manhandled multiple times a game. It hinders those guys from scoring even more points and it hurts hockey as a whole. If there are new fans watching superstars get held up by fourth-line scrubs, why would they want to invest their time into a sport where the superstars cant fully thrive? They probably won’t watch for long. Even if there are 16 power plays for one team, then so be it. NBA star LeBron James has most calls called for him, so why can’t NHL superstars get that same treatment? Will it screw with the flow of a game? Absolutely, but if there’s going to be less fighting, then the officials can do their job correctly and make things right.
My last idea is having refs sent up and down between the NHL, the AHL or the CHL. I’ll be honest, I don’t know the ins and outs of The NHLOA (National Hockey League Officials Association) but I know they talk about how the game went and debrief it. I think that every ref should know they could go down to the minors if they’re making sloppy calls or missing some, rewarding some of the young AHL refs at the same time. It should put some pressure on them to call a game right. It seems like an old boys club of refs in the NHL and it should get broken up, providing other refs from the AHL or CHL a chance to officiate a game in the NHL if they’re good.
Let me know what you think, are these legitimate ideas that could improve officials in the NHL? Or are they just too complicated and would hinder the NHL?
Uncategorized
Recent articles from Angus Hout