Neal Pionk, Mark Scheifele, and Connor Hellebuyck are they setting themselves up for come-back seasons? 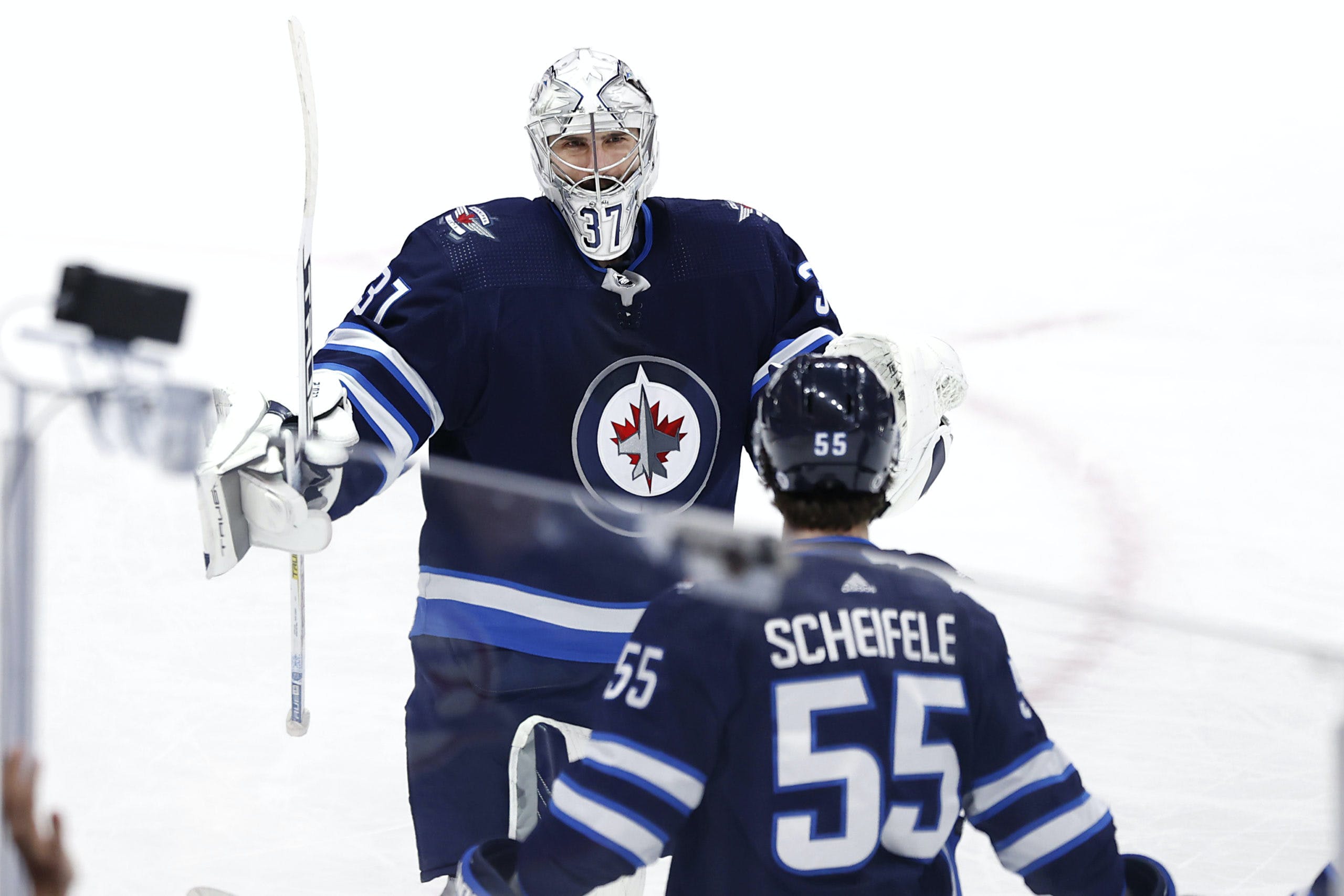 By Angus Hout
1 month ago
The Winnipeg Jets have played six this season although they only have a .500 winning record there have been lots of good things from the team as a whole early on this season. There are players who have been more than solid for this team.  Logan Stanley has played three solid games since being a healthy scratch.  Sam Gagner has been a key player for the Jets as he has shown up everywhere in the line-up and played in all situations. The direction from Rick Bowness which is being executed by Scott Arniel has been solid. Even with Bowness out with illness, he is still there coaching the team. I’ve found the Jets are playing solid hockey for 75-80 percent of the games, they do need to tighten up defensively during that time in the game. Three men have stood out as the guys who are looking like they are due for come-back seasons. Let’s talk about Neal Pionk, Connor Hellebuyck and Mark Scheifele and the fact they could have bounce back seasonsand possible career years.

Since joining the Jets in 2019 Pionk has been a key piece for the Jets defence. Pionk has averaged 22:09 of ice time according to hockey-reference.com since joining the club. Prior to this season, Pionk had played in 202 games and accumulated 417 shots on net and 12 goal,s putting his shooting percentage at 2.87 percent. In just six games this season Pionk has scored three goals this season, scoring his first multi-point game and first overtime winner. Clearly, the defender scoring at a 15.8 percent pace isn’t going to happen but he’s already halfway to tying his previous goal record of six goals which has done twice in his career. Could a 12-15 goal season be a real possibility for the Nebraska-born NHLer? Absolutely! Under Rick Bowness Pionk and the other Jets defenders have been able to jump into the offensive zone when they see the chance and it has worked for Pionk. On top of all of this Pionk’s defensive game has more or less stayed on par with where it was last year. Which was a season where Pionk did not look his best. Pionk has not returned to defensive form just yet. Pionk has played somewhat better than last season but it’s still not great the Jets only possess the puck 50.3 percent when he is on the ice. His Corsi For percentage is low than last year sitting at 49.2 a percentage point lower than last season. I love seeing Pionk in the rush more often than not but I still want to see a little better defence from him. He can slaughter the offensive numbers easily let’s see if his defensive game gets better.

Although Hellebuyck has only played 5 games this season the man is back! With a 3-2 record Hellebuyck looks to be back to his elite ways. Sure last season was a rough one for the 29-year-old goaltender, but which goaltender has been great season every season? I don’t think there’s one who hasn’t had a bit of a stinker. It was just one of those years when everyone wasn’t their best. This season, in five games Hellebuyck has a .929 save percentage. Last season he had a .910 save percentage, the second-worst he’s had in his career. Lets say Hellebuyck starts 60 games this year, he is on pace for 132 goals against if you look at his goals-against average this season which is 2.2. That number goes up to 174 if you look at his career goals against average which is 2.90. If Hellebuyck lets in an average of 2.90 goals against a game that’s still 19 fewer goals against than last year where he would let in 193 goals against.  What has really impressed me with Hellebuyck is his 5-on-5 save percentage which sits at .949 his best it’s ever been by a country mile. One small thing to worry about is his penalty kill, currently, he has a save percentage of .818 the worst of his career. I wholeheartedly believe that Connor Hellebuyck is back to being a top-three goaltender in the NHL and will contend for his second Vezina trophy. Helley will be the big reason the Jets make a big push to the playoffs and a deep run into the playoffs.
Mark Scheifele
The first-ever draft pick by the Winnipeg Jets Mark Scheifele has been on a tear to start this season with four goals in five games and has been playing a good defensive game. Scheifele’s game is back with this new coaching group. So far this season Scheifele has been shooting at 20 percent which has done over a full season as a 23-year-old in 2016-17. This has been the best version of Mark Scheifele I have seen since watching the Jets.  His defensive game seems to be back even though he is a minus three through six games I’ve seen him back-check more times early this season than did all last season. Even on paper, he’s looking at some of his best defensive hockey. His Corsi For Percentage (CF%) is 57.1 percent his best since 2015-16 which was 58.2 percent. His Fenwick For percentage is 59 percent the best it has ever been. If my math is right Scheifele is on pace for 62 goals. Will he score that? Not a chance, I’m all in on Scheifele but I can not imagine him scoring more than 45 goals even in his best season. Seeing the man who never swears to score 45 goals and push for 90 points will be a welcome idea in the chase for the Cup.
I know it’s still so early in the season but three key pieces to the Jets are on pace to have amazing or even career seasons. It’s a good time to feel optimistic as a Jets fan, even with just a 3-3 record. Everyone looks ready to play every night. We have seen more good hockey than bad hockey from this club. If the first six games are just an early sign of what’s to come we can expect to see multiple career years from many of the Jets players.
Editorials
Jets News
Uncategorized
Recent articles from Angus Hout