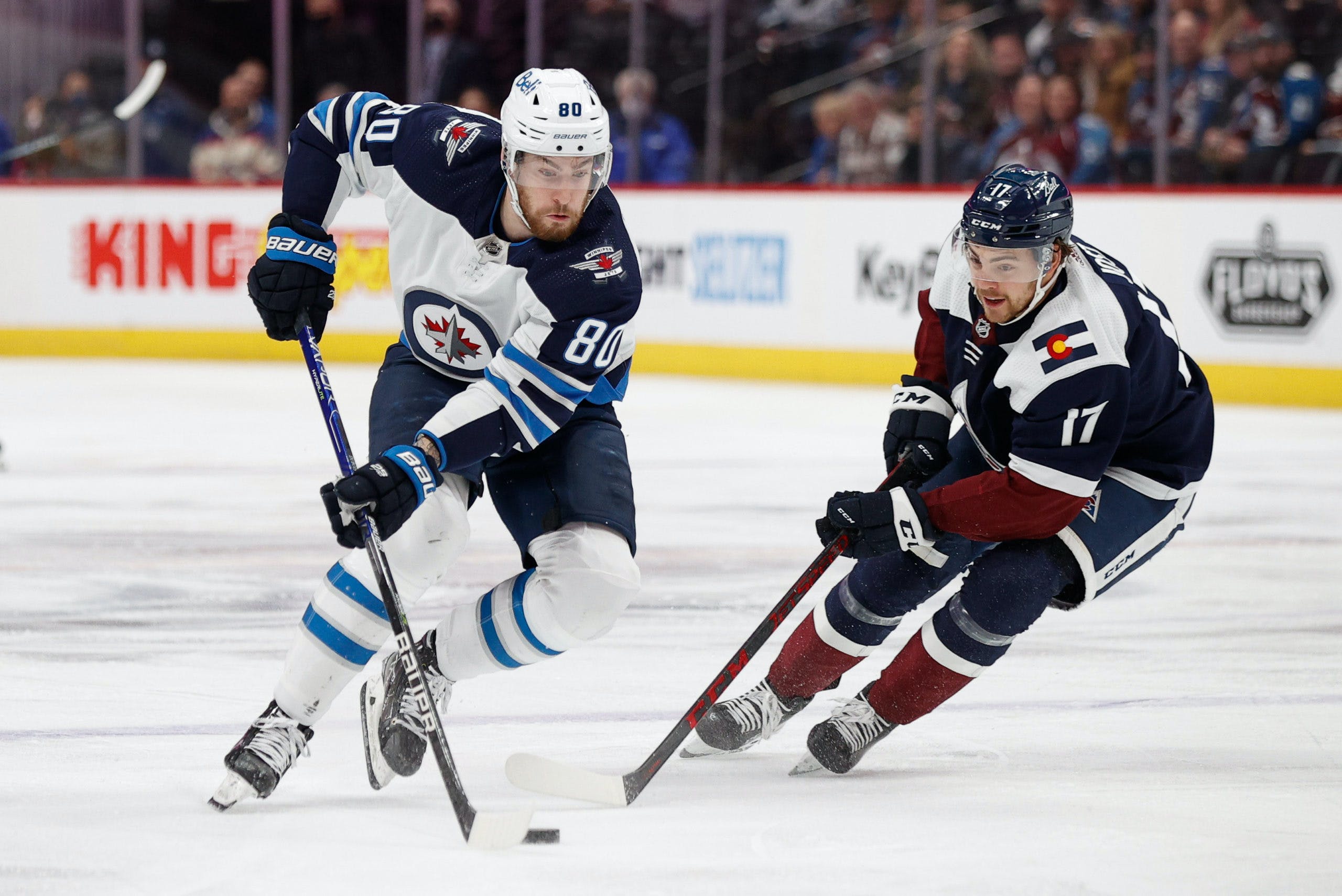 By Thomas Hall
7 months ago
Well, it probably can’t get much worse from here. Check that, maybe it can.
Coming off a crushing 3-1 defeat to the Detroit Red Wings, the Winnipeg Jets will conclude their three-game homestand against an elite championship contender, the Colorado Avalanche. If things weren’t already tough enough, they’re about to become even more challenging while facing one of the best teams in the league.
Thanks to their stellar 50-14-6 record, Colorado enters this matchup with 106 points on the season, which are the most in the National Hockey League. Topping things off, they’re also currently riding a four-game winning streak and have won nine of their previous 11 games.
Suffice to say, answering back during this Central Division tilt won’t be an easy task for the Jets – not that anything has been stress-free for them in 2021-22.
For a preview of this showdown, here are three storylines ahead of puck drop between Winnipeg and Colorado:

On Wednesday, captain @Blake Wheeler fell awkwardly into the boards midway through the game, although he stood up quickly and played the rest of the way. Despite finishing the night, the 35-year-old did suffer a minor injury and is currently viewed as day-to-day.
As a result, Wheeler will be held out of action Friday versus Colorado, opening a spot next to forwards @Kyle Connor and @Pierre-Luc Dubois. Based on Thursday’s practice, it seems @Evgeny Svechnikov will likely step into that position, reuniting him with Connor and Dubois.
Earlier in the season, Svechnikov enjoyed plenty of success alongside this lethal duo, especially from a defensive standpoint. But lately, he’s spent the majority of his time on the club’s fourth line, where he’s logged just 9:34 minutes per game over his previous six contests.
With six goals and 18 points on the year, the 25-year-old will attempt to make the most of this latest opportunity – no matter how long it lasts.
Heading into this showdown, here are the Jets’ projected forward lines against the Avalanche:
@Paul Stastny – @Mark Scheifele – @Nikolaj Ehlers
Connor – Dubois – Svechnikov
@Zach Sanford – @Adam Lowry – @Mason Appleton
@Morgan Barron – @Dominic Toninato – @Adam Brooks

Along with Wheeler, defenceman @Logan Stanley is also dealing with some minor bumps and bruises, which will keep him out of Winnipeg’s line-up Friday.
Stanley, who’s also been struggling as of late, will take the night off as he looks to recover from his current ailments. In his absence, rookie @Dylan Samberg will immediately slide in on the team’s bottom defensive pairing after being recalled from the American Hockey League on Thursday.
Across six NHL games this season, the 23-year-old has compiled 14:00 minutes of ice-time per night, posting two assists, nine blocks, eight shots on goal, seven hits and four takeaways. Though this is a small sample size, he did make a fairly smooth transition to the next level during his brief time with the Jets.
This time around, it’s unclear as to how long Samberg’s latest stint with the big club will last, however, sending him back to the Manitoba Moose could be difficult if he excels once again.
As for the rest of the group, here’s how Winnipeg’s defensive pairings are expected to start:
@Josh Morrissey – @Dylan DeMelo
@Nate Schmidt – @Neal Pionk
Samberg – Dillon

It’s no hidden secret that the Avalanche feature one of the most potent offences in the league. Keeping them in check is something the Jets have failed to accomplish in 2021-22.
In two previous meetings, Colorado’s skaters have scored 13 goals – 10 at even-strength – versus Winnipeg. The other three markers came on the power play, two at 5-on-4 and one at 4-on-3.
For the Jets, well, they’ve struggled to register more than four goals across these two matchups, with two of those occurring at even-strength. One of two things will need to happen for this team to win Friday night: They must limit their opponent’s quality chances or generate significantly more offence than before.
Based on how this roster is constructed, it’s not built to contain elite forwards like @Nathan MacKinnon, @Gabriel Landeskog and @Mikko Rantanen. Not to mention, trying to game plan against superstar defenceman @Cale Makar.
When everything is said and done, Winnipeg’s chances of earning a much-needed victory will probably fall to goaltender @Connor Hellebuyck, just as they normally do.