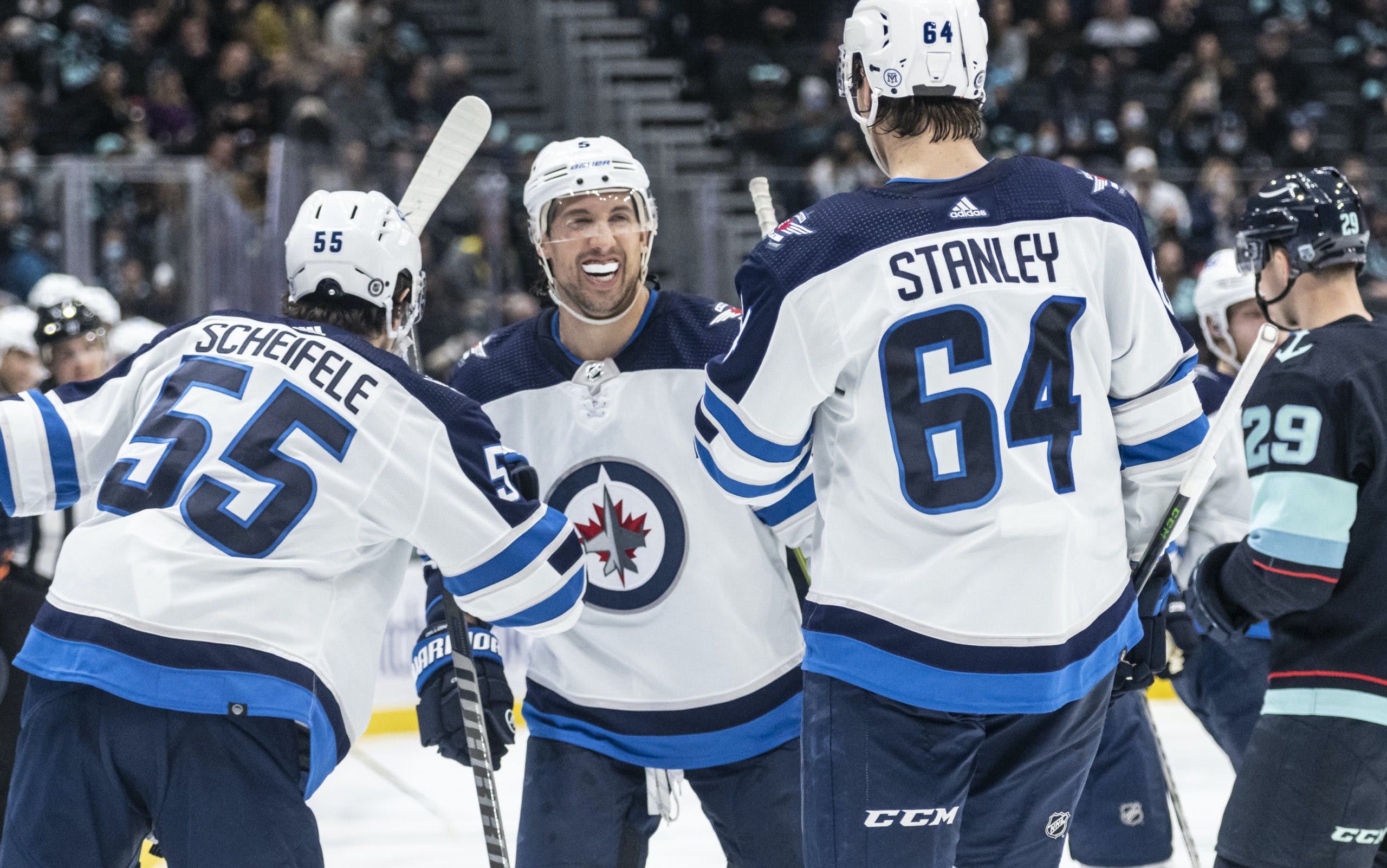 By Thomas Hall
9 months ago
Have you recovered from your Super Bowl party yet? No? Ok good, glad we’re in the same boat here. However, it’s time to get back to hockey, now.
After winning the second half of their back-to-back series Saturday, the Winnipeg Jets received a well-deserved day off Sunday, but unlike the Cinncinati Bengals, this team’s season continues with a showdown against the Chicago Blackhawks.
Even with their recent victory over the Nashville Predators, not much changed in the standings over the weekend as the Jets remain outside of a playoff spot. In saying that, they did leap over the San Jose Sharks in the wild-card standings, meaning they now trail behind just four other franchises – Vancouver Canucks, Edmonton Oilers, Dallas Stars, Anaheim Ducks – for that final seed.
With a victory Monday, this organization would trim that number down to three as they’d jump ahead of the Canucks, who’re inactive until Thursday. Considering this club has four games scheduled over the next six days, there’s no question they could drastically improve their playoff odds with a productive week.
Looking to begin this current four-game homestand on a positive note, let’s explore three storylines ahead of this meeting between Winnipeg and Chicago.

Despite participating in the back-to-back series over the weekend, with @Neal Pionk crossing the American border less than 10 days after testing positive for COVID-19, he’s required to finish that process before being welcomed back into Canada.
Yes, it’s an unfortunate situation. That being said, the show must continue – as they say in show business. As a result, defenceman @Logan Stanley will receive an opportunity to draw back into the line-up and will return from his nine-game absence from a lower-body injury.
Stanley last appeared on Jan. 20 in Nashville, where he logged a season-low 10:07 minutes of ice-time due to his injury. Now, with Pionk unavailable, the 23-year-old is expected to be positioned on the club’s third defensive pairing next to teammate @Ville Heinola.
As for the rest of Winnipeg’s defensive corps, here are the projected defence pairings for Monday’s clash against Chicago:
@Josh Morrissey – @Dylan DeMelo
@Brenden Dillon – @Nate Schmidt
Heinola – Stanley

It’s no secret that the Jets’ penalty kill struggled heavily under former coach Paul Maurice, which saw their success rate positioned near the bottom of the NHL earlier this season. But ever since interim coach Dave Lowry stepped in, their performance has improved significantly while shorthanded.
Proving as such, this club has registered an 84.3 per cent clip on the penalty kill since Lowry took over on Dec. 17, placing them sixth in the league during this span. Examining this recent stretch even further, only one power-play goal has found the back of their net this month, resulting in an 11-for-12 performance on the penalty kill.
If not for Predators forward @Matt Duchene’s marker with the extra skater last game, Winnipeg would be perfect over its previous four games while shorthanded in February. Nevertheless, this contest against Chicago should prove as another quality measuring stick when it comes to killing penalties.
Featuring a slightly above-average power play as of late, the Blackhawks’ 22.6 per cent clip since Jan. 1 sits 13th in the league, as they’ve converted on 12 of their last 53 opportunities with the man advantage. Leading the way for this team in 2022, forward @Alex DeBrincat has scored the most power-play goals (five) and is tied for the most power-play points (nine) among all Chicago skaters.
While not an overwhelming special teams unit, if not taken seriously, the Jets could find themselves faltering on the penalty kill in this contest. But given their recent performance, particularly when it comes to their gap control, that shouldn’t become a problem.

Set to reach a historic milestone Monday, forward @Jansen Harkins has compiled 99 career NHL games with the Jets since 2019-20, and will cross the 100th mark during this upcoming tilt against the Blackhawks.
Over those 99 contests, Harkins has posted eight goals and 17 points, with five goals and eight points occurring this season. As a second-round pick, obviously, most fans likely would’ve hoped for the 24-year-old to surpass at least 20 points by now, although that shouldn’t take anything away from this memorable moment.
Once the 6’2″ forward hits the ice Monday night, he’ll become the 56th skater from the 2015 NHL Draft to log at least 100 career games – joining fellow Winnipeg draft selections @Kyle Connor (first), @Jack Roslovic (first) and @Mason Appleton (sixth) in this regard.
With one goal, four shots on goal and one high-danger chance over his last two contests, Harkins will attempt to carry his recent success into this matchup that’ll watch him cross the century mark.
More from Jets Nation:
Uncategorized
Recent articles from Thomas Hall