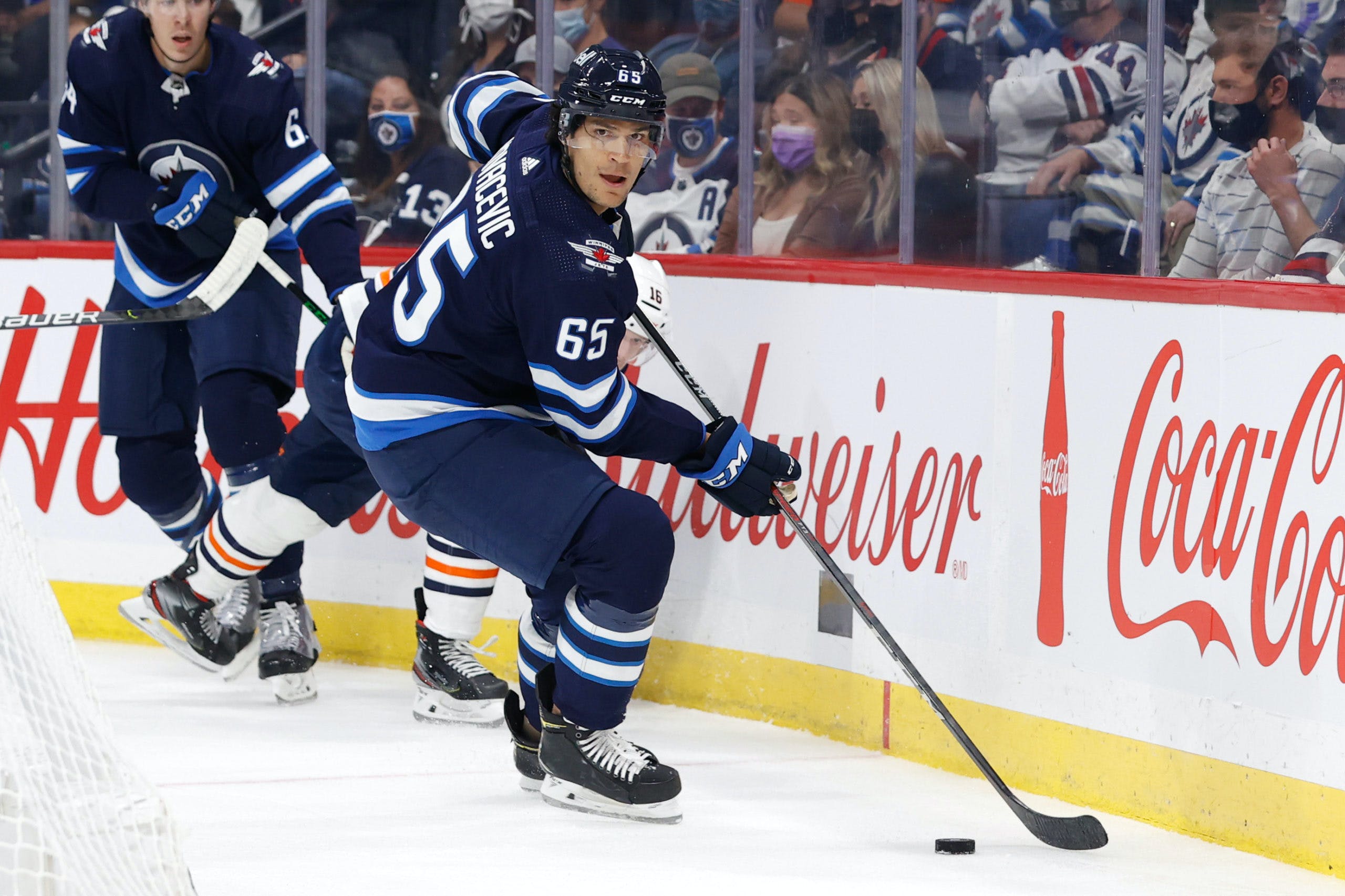 By Brennan Delaney
9 months ago
Welcome to the weekly round-up covering Winnipeg Jets prospects from Jan. 31 – Feb. 06. To be considered a prospect, the Jets must own the rights of the player upon returning to the NHL. Furthermore, except for one player, all skaters were drafted between the 2017 and the 2021 drafts.
Below is a list of each prospect, as well as age, position, year acquired, means of acquisition along with the league and team they currently play for.
This article will start from youngest to oldest. Let’s dive in.

The Jets have four prospects that were chosen in the 2021 class, two players (Nikita Chibrikov and Dmitry Rashevsky) playing in the Kontinental Hockey League (KHL), while Chaz Lucius and Dmitry Kuzmin play in North America.
The KHL announced on Feb. 5 that the league will not be playing the rest of their regular season and will jump straight into the playoffs.
Chaz Lucius:
The 18-year-old centre chosen in the first round was featured in two games for the University of Minnesota. While he didn’t add to his total of eight goals and 16 points this week, the young forward has shown promise in his freshman season for the Gophers.
Nikita Chibrikov:
The 18-year-old right-winger finished the KHL season playing only four games while not scoring a point. Chibrikov’s SKA Petersburg finished first in the Western Conference, meaning they will have a spot in the KHL playoffs. He played the majority of the season with SKA-Neva St. Petersburg in the Supreme Hockey League (VHL). In 24 games, he registered 13 goals and 28 points.
Dmitry Kuzmin:
The left-shot defenceman from Belarus had a successful week, scoring three goals in Flint’s two games. Before creating that excel sheet, the 18-year-old – who was chosen in the third round – only had one goal, which came on opening night. Kuzmin now has four goals and 16 points in 29 games this season for the Firebirds.
Dmitry Rashevsky:
The 21-year-old forward was chosen in the fifth round of the latest draft. His team, Moscow Dynamo, finished second in the Western Conference, meaning they’ll also be in the 2022 KHL playoffs. Rashevsky finished the season playing 48 games, registering 19 goals and 35 points. It’s only a matter of time before he makes the jump to North America.

The Jets chose four players in this draft, with their first-rounder already making an impact with the big squad. Therefore, Cole Perfetti will not be featured on this list as he’s already burned the first year of his entry-level deal.
Daniel Torgersson:
The 20-year-old left-winger played three games this past week for AIK in the second division of Swedish Hockey. The second-round pick registered an assist, bringing his season total to four goals and six points in 26 games. Torgersson has played one game this season for Frolunda in the top flight of Swedish hockey.
Anton Johannesson:
The 19-year-old left-shot defenceman plays with HV71 Jr in the Swedish Junior League. This week, he had two goals and an assist, but expanding the scope by an extra game reveals that he has four goals and an assist in his last three games. This season, he has six goals and 17 points in 19 games. The young defenceman looks to be an intriguing fifth-round selection.
Tyrel Bauer:
The 19-year-old right-shot defenceman hasn’t played a game since Dec. 11. In 24 games played this season, the sixth-round pick has four goals and eight assists. Bauer, who’s the captain of the Seattle Thunderbirds, had surgery on his injured leg on Dec. 17 and is hopeful to return to the lineup in the second half of the season, per a team release.

As this article moves further along, more players drafted will be omitted. For example, 2019 draftee, Logan Neaton, will not be featured in these articles. Neaton, who’s a goaltender, was a fifth-round pick in this draft. Since moving to university, Neaton’s numbers have significantly fallen to the point where he’s no longer considered a prospect.
Ville Heinola:
The first-round pick of the Jets in 2019 has enjoyed a successful season featuring for the Manitoba Moose. The 20-year-old left-shot defenceman played one game this past week, registering four shots. In 25 games played, Heinola has two goals and 16 points, which is rather impressive for a young defenceman. Furthermore, he has also played four games with the Jets this season.
Simon Lundmark:
The 21-year-old right-shot defenceman also played only one game with the Moose in the previous week. He also featured four shots in the 2-1 shootout win against the Texas Stars. This season, the second-round pick has two goals and eight points in 28 games played.

The Jets chose six players in this draft, four of which will feature on this list.
David Gustafsson:
The 21-year-old centreman most recently played on Jan. 2 against the Vegas Golden Knights. The first-round pick in 2018 has had trouble staying healthy and is currently on IR. Per interim coach Dave Lowry, the prospect is still far away from hitting the ice again. Thus far for the Moose, Gustafsson has seven goals and 16 points in 23 games played.
Here’s to hoping he returns soon.
Nathan Smith:
The 23-year-old centre chosen in the third round has enjoyed a successful season playing at Minnesota State. In 28 games played, the 23-year-old has 15 goals and 41 points.
This led to his call up to the USA Men’s Olympics team. Stay tuned for updates.
Declan Chisholm:
The 22-year-old left-shot defenceman, featured in the Moose’s 2-1 shootout win against the Texas Stars, assisted on the only goal that his team scored. In 31 games played this season, Chisholm has six goals and 16 points.
The defenceman is one to keep an eye on, as he made his NHL debut earlier this season.
Jared Moe:
The 22-year-old goalie chosen in the sixth round has had an impressive 2021-22 season at the University of Wisconsin. Moe played two games this past week, posting a .897 save percentage in a game where he faced 39 shots against. In the other contest, Moe came off the bench in relief, saving 19 of his 21 shots against for a .905 save percentage.
This season, the sixth-rounder possesses a .915 save percentage despite owning a 6-12-3 record. He is an exciting goaltending prospect, one of only a few the Jets have.

The 2017 draft class is the draft that may produce key players for the Jets moving forward. With their first-round pick, the Jets selected @Kristian Vesalainen. However, there are even more players in the later rounds on the cusp of making the big team full-time.
Dylan Samberg:
The 23-year-old left-shot defenceman made his NHL debut early in 2022. In 16 AHL games, he posted five assists and was even finding success for the Jets. He played six games and assisted on two goals before ending up on IR with an upper-body injury.
Johnathan Kovacevic:
@Johnathan Kovacevic was drafted in the third round and has put together quite the year.  The 24-year-old didn’t register a point in the Moose’s 2-1 over the Stars, but in 33 AHL games this season, he has seven goals and 14 points.
Furthermore, he’s also played three games with the Jets.
Leon Gawanke:
Would you look at that, another defenceman with promise. Chosen in the fifth round, the 22-year-old German has put together an excellent season with the Moose. In 33 AHL games, Gawanke has five goals and 20 points (as a right-shot defenceman, mind you). He also registered an assist in the 2-1 win against the Stars.

Centre Greg Meireles was signed by the Moose in ’21. He has three goals and 19 points in 36 games this season. He turned 23 on Jan.1, meaning he’s still a prospect.
Additionally, both goaltenders for the Manitoba Moose are considered prospects. @Mikhail Berdin, a 23-year-old drafted in the sixth round of the 2016 NHL Draft, is looking like the better of the two. He’s posted a .907 save percentage and an 11-7-0 record in 18 starts.
@Arvid Holm, a 23-year-old that was chosen in the sixth round of the 2017 draft, has posted a .903 save percentage in his first season on North American ice.

While the Jets may not feature a lot of forward prospects on the rise, they have a ton of defensive prospects on the cusp of making the NHL team. Moreover, they have multiple goalies that could be able to back up Connor Hellebuyck in a few seasons.
Editor’s note:
I’m still relatively new to the Jets’ prospects, but I think it is fair to say that their defence will be good for many years to come. As always, you can follow me on Twitter @Brennan_L_D.
More from Jets Nation:
Uncategorized
Recent articles from Brennan Delaney