As losses pile up, Jets inch closer to becoming sellers at this season’s trade deadline 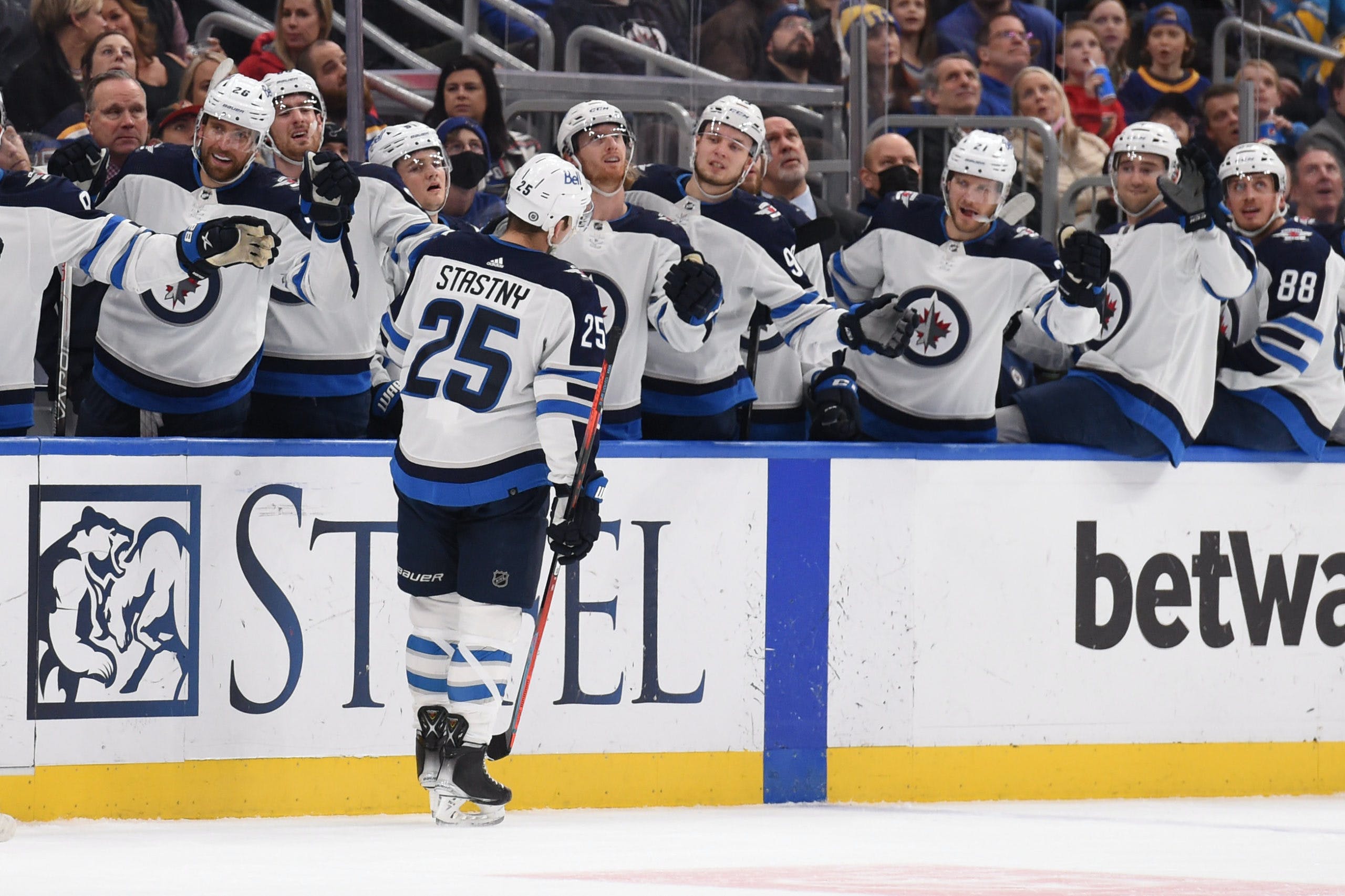 By Thomas Hall
10 months ago
At the start of the regular season, the Winnipeg Jets were expected to make a competitive playoff run, but now at the unofficial midway point, delivering on that expectation seems next to impossible.
Granted, this franchise hasn’t been eliminated from post-season contention – and is probably still a few months away from potentially reaching that point. Still, their current position in the standings doesn’t bode well for their chances of making a miraculous second-half surge.
With an 18-17-7 record and 43 points on the year, Winnipeg enters the All-Star break sixth in the Central Division and behind five other organizations for the final wild-card seed in the Western Conference. At the moment, this club is closer to the bottom of the standings in the west – as they’re only separated by three teams – than it is to one of the two wild-card positions.
Sure, 40 games remain in the season, meaning there’s still time to potentially recover from this underperforming first half. Having said that, making up sizeable ground the rest of the way won’t come easy, especially based on the compacted remaining schedule.
Of the 40 contests left to be played, 27 of them will occur between Feb. 8 – Mar. 31. That rounds out to 27 games in just 52 days, which will also include five separate back-to-back series.
Adding to this difficult challenge, 16 of those matchups are scheduled against opponents who currently feature a .500 winning percentage or higher – with half of them coming against Central Division rivals.
Suffice to say, even with almost half the season remaining, climbing back into a playoff spot down the stretch will likely be a very tall task for the Jets. Since this season’s trade deadline is less than two months away (Mar. 21), at this rate, becoming sellers appears to be a not-too-distant reality for this front office.

Credit: James Carey Lauder-USA TODAY Sports
Presuming the Jets do indeed stay on this troubling path, which skaters might they trade? And how aggressive will general manager Kevin Cheveldayoff be in retooling this roster? In one word, conservative.
While the 2021-22 season has been a major disappointment thus far, it doesn’t appear a major rebuild will be required, at least, for now. No, this franchise’s competitive window isn’t closed, however, it may be a short time before another playoff berth is secured in Winnipeg.
Between naming a permanent head coach, determining the future’s of @Blake Wheeler and @Mark Scheifele, extending @Pierre-Luc Dubois and adding more skill to this group, management certainly has its work cut out for them this summer.
In the meantime, Cheveldayoff and his staff will likely attempt to make a few minor moves at this season’s trade deadline, although that’ll probably only involve the club’s rental pieces. Rather than adding to this current group, which has been the case over the last several campaigns, fans should expect to see impending unrestricted free agents like @Paul Stastny and @Andrew Copp moved for future assets.
Without a second, third or fourth-round pick in the 2022 NHL Draft, Winnipeg’s efforts will likely be focused on strengthening its draft pick capital along with its already impressive prospect system. If nothing else, taking this approach would allow them to regroup and potentially undergo a minor facelift (if you will) regarding its roster construction in the off-season.
On the surface, Stastny would seem to be the most obvious trade chip between these two players, especially given his age and 10-seasons of playoff experience. At 36-years-old, “Pauly Walnuts” could still serve as a valuable bottom-six forward to most playoff contenders as he aims to capture his first-ever Stanley Cup.
Though his offensive production isn’t what it used to be, with 11 goals and 20 points through 31 games in 2021-22, there’s definitely a sizeable amount of gas remaining in his tank. Not to mention, the veteran forward is also still playing 17:02 minutes of ice-time per night, which is very impressive for someone of his age.
Considering Winnipeg surrendered a fourth-rounder – and @Carl Dahlstrom – while acquiring Stastny from the Vegas Golden Knights last summer, it’d be reasonable to assume the front office would be asking for a similar return this time around. As for potential suitors, he could receive interest from the Anaheim Ducks, Los Angeles Kings, Boston Bruins and Nashville Predators.
Considering Stastny features a $3.75 million cap hit, the Jets would likely need to retain some salary in most trade proposals involving the Quebec City native.
As for Copp, an argument could be made about keeping him past the Mar. 21 deadline, however, that’d solely depend on how confident this organization feels about its chances of re-signing the 27-year-old this summer. If those odds are low, then it’d probably be best to part ways with him during the season rather than potentially letting him depart for nothing in return.
Featuring a $3.64 million cap hit, there shouldn’t be any shortage of suitors knocking at the door to acquire the 6’1″ forward’s services, especially since he’s maintained his improved scoring ability from last season. In total, the left-hander has posted 12 goals and 28 points while logging 20:46 minutes of ice-time per night across 42 games.
Even as a rental, Copp would provide plenty of upside in the playoffs as he could be assigned to either the top-six or bottom-six, and could also serve as a reliable performer on the penalty kill, as well. Given that the New York Rangers feature almost $15 million in cap space and are also in need of forward help, they may prove to be an ideal trading partner.
Searching for a recent comparison, the Buffalo Sabres received two draft picks (third-round, fifth-round) and retained 50 per cent of @Eric Staal’s salary when they traded him to the Montreal Canadiens last season. Since Copp is much younger than Staal, perhaps the Jets could acquire at least a second-round selection plus other assets, too.
Either way, with Winnipeg’s playoff chances looking grim, selling off short-term pieces is destined to become their immediate future if this ship can’t be turned around shortly after the All-Star break.
More from Jets Nation:
Uncategorized
Recent articles from Thomas Hall