Jets Nation Radio Episode 12. Lambert is Great but the Hawerchuk Statue is better 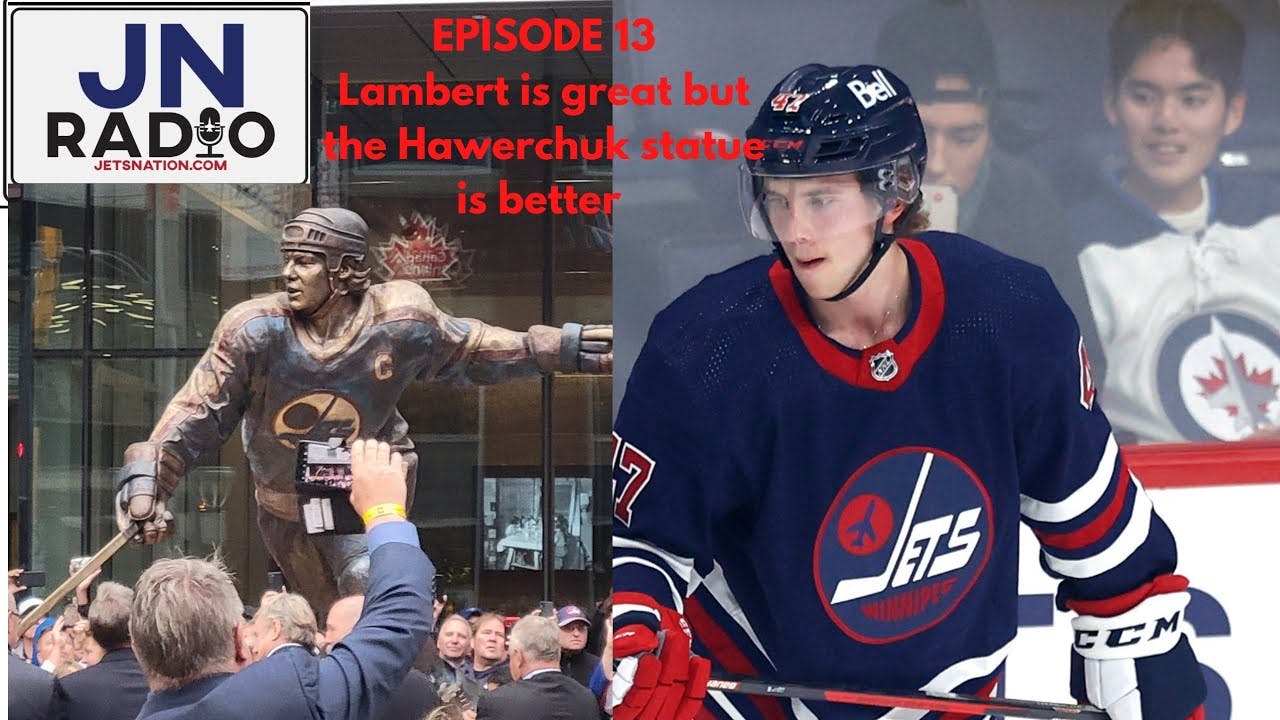 By Angus Hout
2 months ago
Whether it’s Sunday night or Monday that you’re reading this, we have a brand new episode of Jets Nation Radio for you. This week we start off by talking about the Minnesota Vikings and their tight game against the New Orleans Saints and that Angus Hout is a degen who likes to gamble on Football games before noon. Such a sinner. Once Sam Brownell and Angus start talking about hockey they hop right on in and start gushing about @Brad Lambert and how good he will be with the Jets in the next few years playing along with @Cole Perfetti and one other current Jet if he decides to re-sign in with Winnipeg. Angus asks Sam where Lambert should be playing next season. Sam discusses the importance of NHL experience and Angus talks about the positives of playing in the AHL for the Manitoba Moose. One thing both Sam and Angus can agree on is Lambert should not be in the WHL with the Seattle Thunderbirds. Sam asks about @Rutger McGroaty and where is he at Angus has half an answer for us but not a full one. Angus and Sam discuss the younger defencemen and which of @Dylan Samberg, @Ville Heinola and, @Logan Stanley end up primarily playing in the sixth spot for the defence.  Sam discusses the fact that @Rick Bowness has so much patience with his young players.
The guys tee up the final two games of the preseason between the Jets and the Calgary Flames. The two guys protest that there is a week between the final preseason games and the season opener on October 14th against the New York Rangers. It comes out that Angus stole Sam’s shirt. Sam blames a former member of the podcast for the theft. Sam forces people to stop listening to look at @David Rittich’s new pads. Angus advocates for the NHL to give goalies more money. Angus asks if we are going to see heel @Blake Wheeler this season and the guys trail off talking about fighting in the NHL. The debate of captaincy comes and this time there is a three-man battle for it. Thoughts of @Neil Pionk come up, Sam’s hopes for Pionk are high, and he played through an injury last season. Angus talks about why he’s excited about the Jets season Sam brings in the hashtag #BelieveinBones. @Saku Maenalanen is mentioned and the discussion of the fourth line comes up. We answer your Twitter questions and finish talking about the new @Dale Hawerchuk statue and the ceremony.
Make sure you like and subscribe to Jets Nation Radio wherever you get your podcast’s from. Make sure you tell your family and friends about Jets Nation Radio.
Uncategorized
Recent articles from Angus Hout