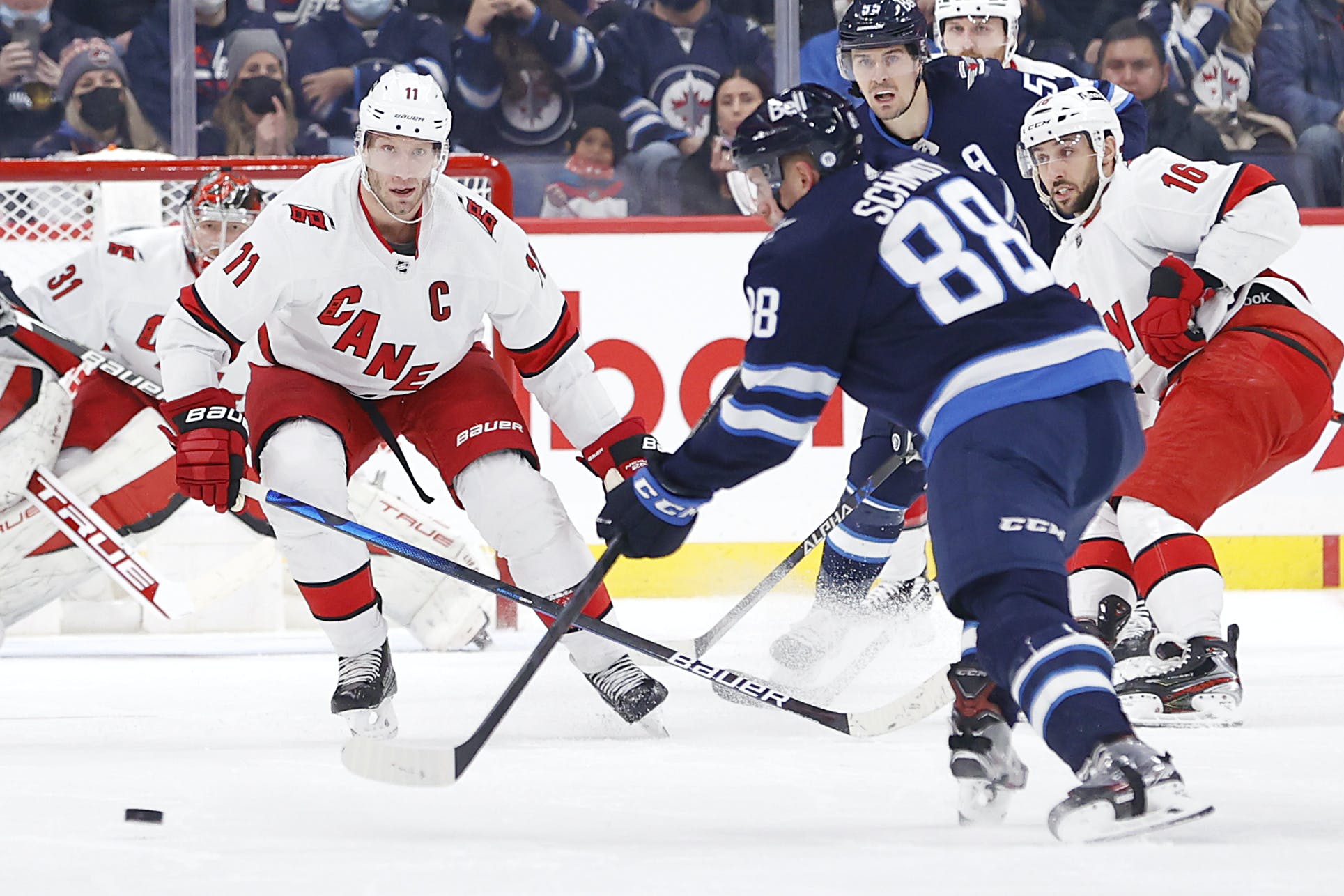 By Angus Hout
7 months ago
The Winnipeg Jets are coming off a third straight loss, this time to goaltender @Igor Shesterkin and the New York Rangers. Besides that shutout loss and @Logan Stanley’s defensive blunders, I enjoyed that game.
Yes, that probably sounds crazy.
Winnipeg’s brightest performer was goaltender @Eric Comrie two nights ago. He looked confident while stopping 31 of his 33 shots against, registering a .939 save percentage. It was a solid outing that’ll likely go unnoticed due to his counterpart’s shutout.
On Apr. 16, I went 4-for-6 on the betting front. A pretty strong result. Hopefully, Thursday is another successful night for me and perhaps the Jets, too, who’ll be facing the Carolina Hurricanes.

The Jets are 35-31-11 this season, sitting 19th overall in the NHL with 81 points. They’re just one point ahead of the New York Islanders, who feature 80.
Comrie will start in back-to-back games Thursday, providing @Connor Hellebuyck another night of rest after being ill with a non-COVID illness. Comrie has an 8-4-1 record, a 2.69 goals-against average and a .914 save percentage in 2021-22.
Winnipeg will also be without forwards @Mark Scheifele (upper body), @Cole Perfetti (upper body) and defenceman @Logan Stanley (healthy scratch).
All-star @Kyle Connor leads the Jets in scoring, with 42 goals and 87 points. Defenceman @Josh Morrissey leads the team in average ice-time (23:43 minutes per game).
In the last contest between the Hurricanes and the Jets, Carolina secured a 4-2 victory. The last 10 matchups have been split between five wins and losses for both clubs, with Winnipeg outscoring its opponent 29-28 during this span.

What You Need to Know About the Hurricanes

The Hurricanes are enjoying a very successful season. Currently, they sit atop the Metropolitan Division via a 49-20-8 record and 106 points in 77 games. If the playoffs were to start immediately, their first-round opponent would be the Boston Bruins.
Finish goaltender @Antti Raanta will start for Carolina on Thursday. So far, he features a respectable 13-5-4 record, a 2.46 goals-against average and a .912 save percentage.
Carolina will be without goaltender @Frederik Andersen (lower body) and forward @Jesperi Kotkaniemi (lower body).
Forward @Sebastian Aho leads his club in goals (36), assists (41) and points (77). Defenceman @Jaccob Slavin leads all skaters in average ice-time (23:28 minutes per game).
This game will consist of another showdown between the Svechnikov brothers, Andrei and Evgeny.

I’m betting with PointsBet and so should you! Check out their app, as well, it’s really handy.
Money Line: Jets win at +215.
Over/Under: Over 7.5 total goals scored at +190.
Risky Business: @Andrei Svechnikov and @Nikolaj Ehlers both score a goal at +650.
Just For Fun: @Evgeny Svechnikov scores a goal at +450.
Period Bet: Jets win the second period at +160.
Parlay: Detroit Red Wings ML, New York Rangers ML and Minnesota Wild ML at +1468.
Good luck and happy betting.