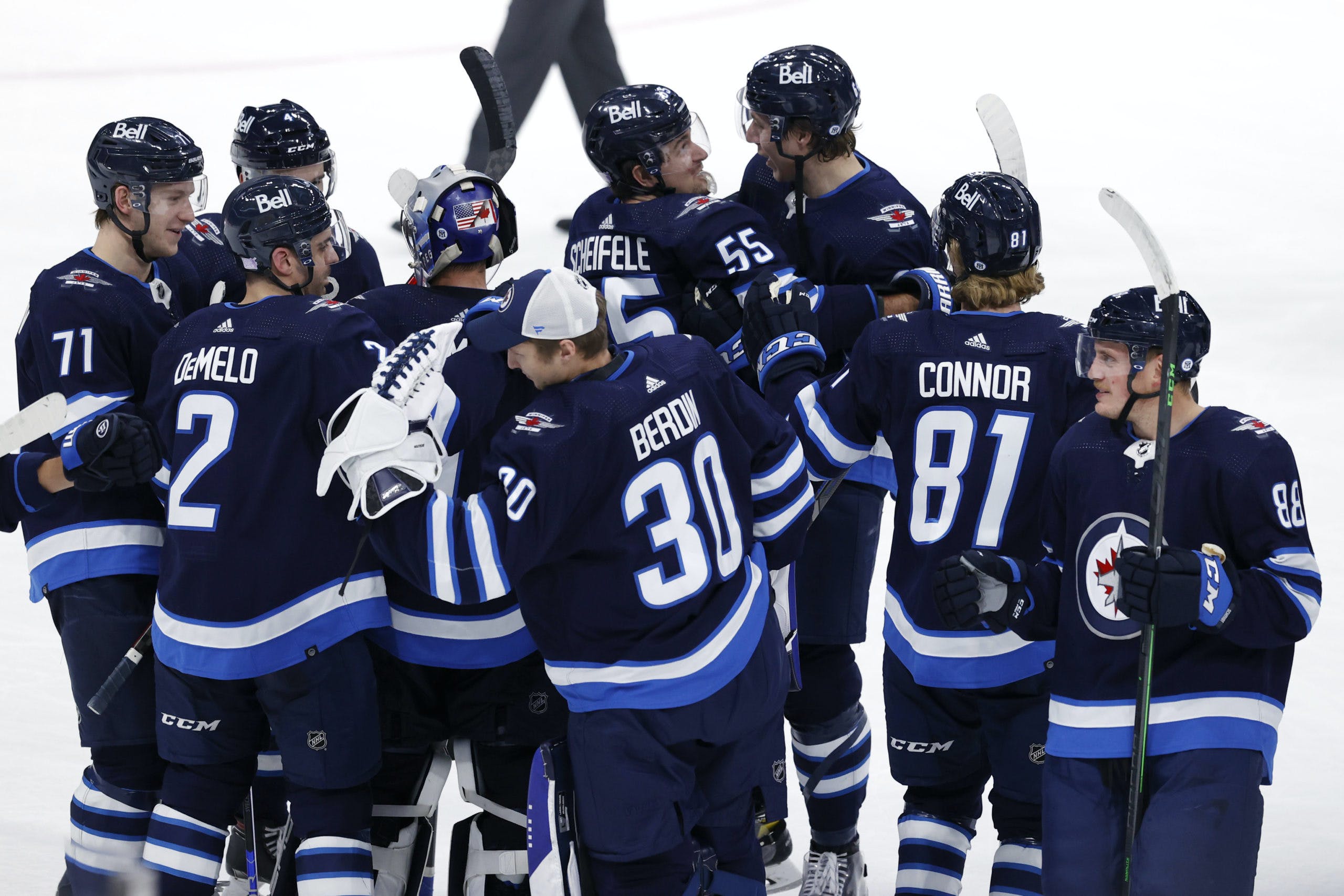 By Angus Hout
1 year ago
So that was an exciting game Tuesday night, did everyone else also lose at least five years off their lives because of it? Yes, ok good – me too.
Interestingly, this was the third time this season the Winnipeg Jets have played against a Central Division opponent. Looking across the ice, the Dallas Stars have endured a very rough start to their season, posting a  3-4-1 record prior to this showdown, and had also lost each of their last three games.
Trending in a completely opposite direction, the Jets had registered at least one point in each of their last six games, and thanks to another positive outcome, they were able to extend that streak to seven contests on Tuesday.
For a recap of this Central Division matchup, here are three hot and three cold performers from Winnipeg’s 4-3 shootout victory over Dallas:

I have to give this one to the handsome man from Denmark, @Nikolaj Ehlers, for going deep into the Jets’ defensive zone and winning races to the puck. I love seeing that sort of play; it gives the club more offensive chances in the long run.
That being said, Ehlers also started the first period hot in the Stars’ zone. I loved watching him go all out through the first 20 minutes. The goals will come for Ehlers soon, you can bet on that.

Need to hand this one out to @Neal Pionk regarding his lack of communication inside the defensive zone, which cost the Jets a first-period score. Making the wrong jump off the face-off and then trying to turn around to make up for his mistake ultimately cost his team an early lead.
Overall, I did like his performance but a bad play gave him a forgettable knock on the night.

This hot performer goes to a guy who now owns an eight-game point streak, @Pierre-Luc Dubois, who’s been buzzing all season long. Watching the hustle from Dubois has been great.
The confidence oozed from Dubois throughout this contest and watching him drive to the net to score the Jets’ third goal was something truly special. At that moment, Dubois seemingly took all the momentum away from the Stars, you know, before the team gave it all back in the third period.

It goes to the big man @Logan Stanley. The near second goal against, which was eventually called back due to offside, Stanley was seen deep into the offensive zone trying to do some fancy puck work.
Like, that just can’t happen in this league. If not for @Dylan DeMelo and a favourable ruling from the officials, it could’ve proved to be a very costly point in the game for Winnipeg.

It goes to no one – that was some rough hockey to watch. @Eric Comrie played average in the third period, the Stars were provided far too many scoring chances and the Jets didn’t create any offensive momentum until the last five minutes of regulation.

The Jets endured a mediocre showing third period. I had to stretch to figure this one out, but this segment probably needs to go to @Jansen Harkins, as he was invisible for a lot of the third period and when I did see him he had a poor time.
In particular, his ankles were absolutely destroyed when @John Klingberg scored the Stars’ game-tying goal. Harkins wasn’t terrible, but you could see some of his inexperience in the final frame.

Dubois is my hot performer of the game. Staying on the ice a little extra during overtime and his breakaway chance that almost ended the game. He played up and down the ice all night and just made life easier for the whole team.
The only negative aspect of Dubois’ performance was that he missed his shot in the shootout, but luckily, @Mark Scheifele bailed him out in the end.

I need to give some love to Comrie. The guy didn’t post great numbers this game, producing just a .889 save percentage and allowing three goals on 27 shots against. Still, the three goals surrendered weren’t entirely his fault, as most of the blame can be directed to his teammates.
All three of those goals against were either a result of a defensive breakdown in front of Comrie or a mad scramble in the crease. More importantly, we should provide a shout-out to @Connor Hellebuyck for having his first child before the puck drop – congrats to the new parents, Connor and Andrea.
Uncategorized
Recent articles from Angus Hout