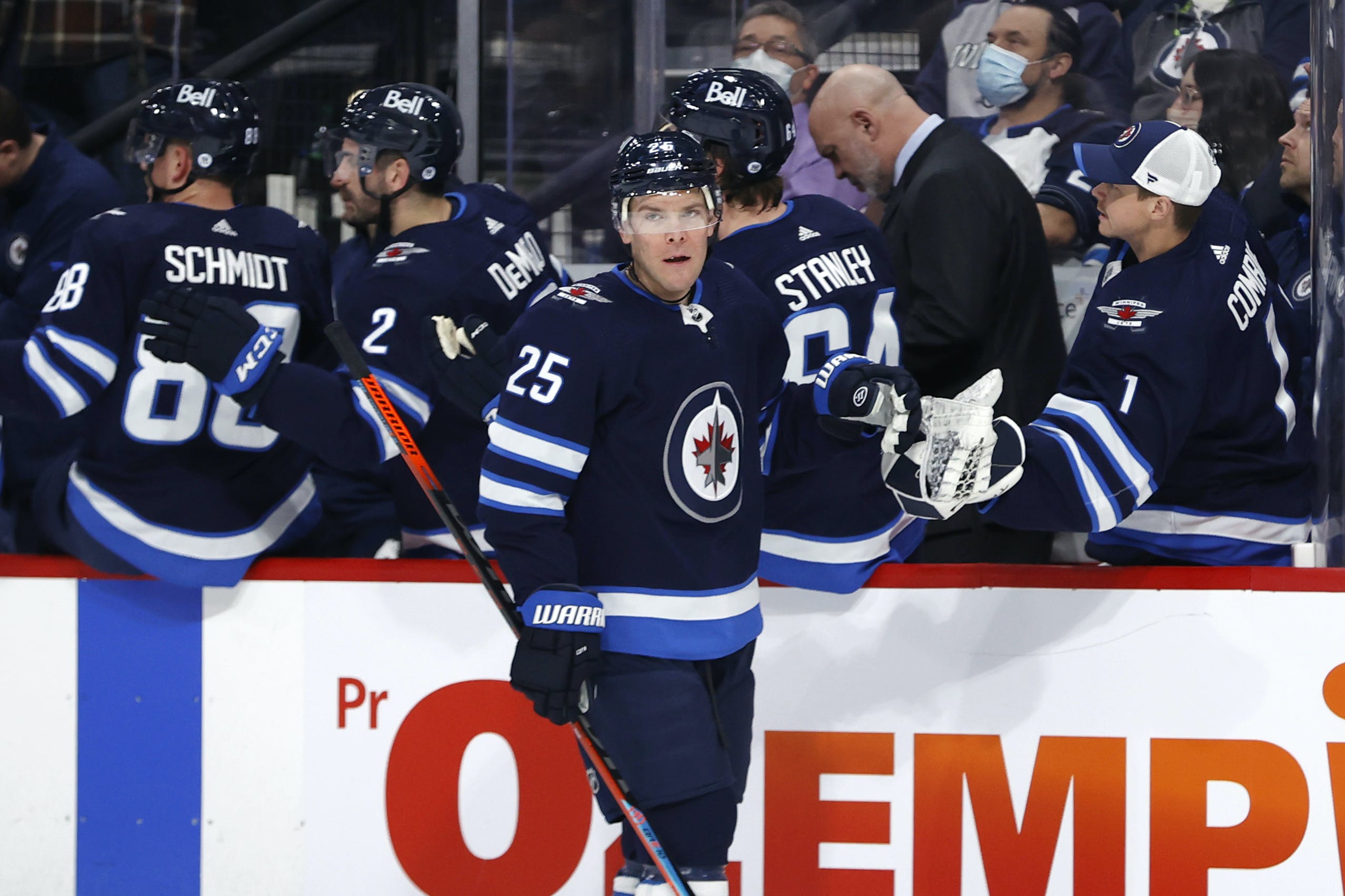 Photo credit: James Carey Lauder-USA TODAY Sports
By Colton Davies
7 months ago
Comments
Forward @Paul Stastny’s contract is due at the end of the season and it’d be in the Winnipeg Jets’ best interest to lock him up before someone else does.
The 36-year-old has resurged as one of the club’s top point producers this year. He’s registered 42 points (21 goals, 21 assists) in 65 games on the season and according to Elite Prospects‘ projected stats, he’s due to finish with 23 goals.
Stastny last hit the 20-goal mark back in 2013-14, when he played and served as an assistant captain with the Colorado Avalanche. This type of resurgence in a veteran player like Stastny is a great look for him and the Jets, he deserves to get paid.

The kid has moves. 👀

Morgan Barron sets up Paul Stastny for his 20th of the year to give the @NHLJets the lead. pic.twitter.com/rmHw25dLaF

Advertisement
Ad
Advertisement
Ad
According to NaturalStatTrick.com, Stastny possesses a 104.4 PDO, a 52.66 per cent Corsi For Percentage (CF%), a 52.89 per cent Fenwick For Percentage (FF%) and a 44.51 per cent Expected-Goals For Percentage (xGF%), the highest of his career.
Additionally, he owns a 63.41 per cent face-off percentage, winning 175 of his 276 face-offs. His faceoffs are down significantly this year, mainly due to playing on the wing alongside the likes of @Mark Scheifele, @Nikolaj Ehlers and others.

Inside the locker room

Stastny brings a level head to the locker room. A veteran of 1,066 games, he’s amassed almost 800 points – 797 to be exact. He ranks 149th on the NHL’s all-time assists list with 513 career apples. He’s a highly respected veteran on and off the ice, and rightfully so, given his talent and families history.
Advertisement
Ad
Advertisement
Ad
On May 12, 2021, he played in his 1000th NHL game, the first of the famous Stastny family to do so. It was a huge honour for him, his family and the Jets. But the great thing about someone who’s played the game so long is he’s also self-deprecating. He understands the importance of working together as a team in order to succeed. Recently, he expressed disappointment for letting down Vezina-calibre goaltender @Connor Hellebuyck.
“We left our goalie out to dry. We’ve done it all year. Some games, (Hellebuyck) makes big saves or they don’t score, but if you keep giving up Grade A chances like that and keep leaving guys alone in the slot, you’re going to get burned.” Stastny said as he discussed facing elite teams like the Boston Bruins, Carolina Hurricanes and back-to-back Stanley Cup Champions, the Tampa Bay Lightning. Stastny was quick to point out a similar comment that Ehlers recently made after suffering a loss to the Florida Panthers.
Advertisement
Ad
Advertisement
Ad
“You just look at the best teams over the last two or three or four years,” Stastny said. “If you watch their game, yeah, they have some high-end skill, but that high-end skill doesn’t come out right away. They play the game the right way, they almost grind you, force you to make turnovers, and then that high-end skill kind of takes over. You know, that’s how you learn to win. I think you have to realize it’s not going to be easy every single night.”

Paul Stastny on giving up too many chances, continuing to fight for each other, and more.

These teams all feature a similar playing style. Stastny and other Jets players understand they need to embrace an identity. Bringing Stastny back to the fold makes a lot of sense, especially if the Jets are looking to create a culture. What better person to lead the charge than a guy, who as a rookie, was mentored by superstars Joe Sakic and Milan Hejduk.
Advertisement
Ad
Advertisement
Ad
As Stastny nears 37-years-old, he’ll likely be willing to take a pay cut next off-season. So if the Jets can lock him up for $1.5 million on a short-term deal, I think that works for both parties going forward.