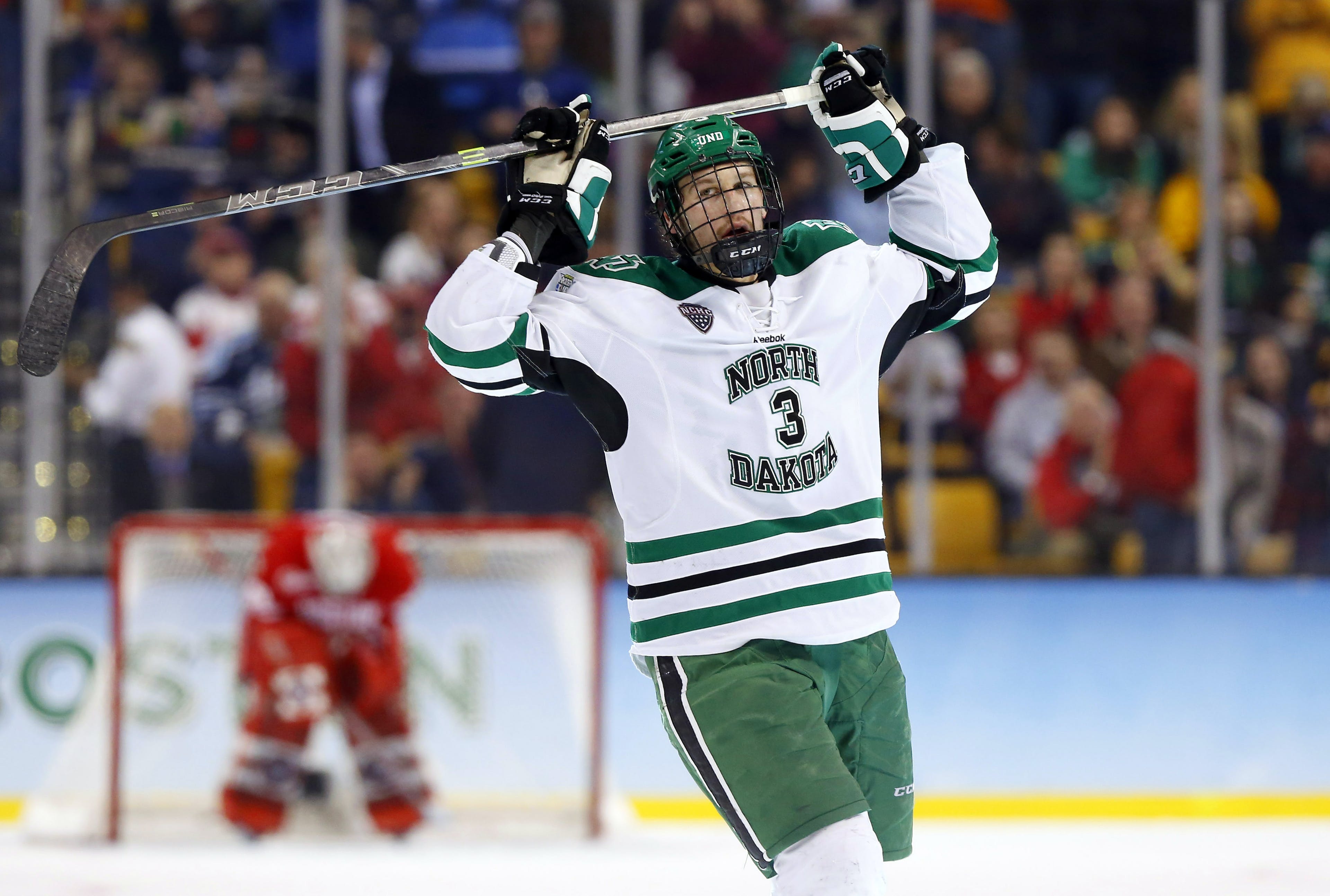 Photo credit: Winslow Townson-USA TODAY Sports
By Rob Mahon
5 years ago
Comments
A hallmark of previous Winnipeg Jets entries in the Penticton rookie tournament was a young, skilled forward core but at times a problematic defense. That won’t be the case this year.
There are no Kyle Connors or Jack Roslovics or Nikolaj Ehlers (Ehlers’s? Ehlerses? Ehlersi?! Well you know what I mean) on this year’s edition of the rookie tournament roster, but this might just be the best defensive core the Jets have ever sent out west.
As for the forwards, lacking in star power they may be, but there’s no shortage of experience. Incidentally, more than half the forwards are invitees and another, Francis Beauvillier, was a UFA signing late last season.

Nice to see the Moose sign Francis Beauvillier. He looked pretty solid during a small sample size towards the end of last season.

Advertisement
Ad
Advertisement
Ad
In another team, that might be indicative of poor or infrequent drafting. In the Jets’ case, however, it’s a function of so many of their drafted forwards either playing college or having already gone professional.
Oh, and you won’t find the Jets’ most recent first rounder, Kristian Vesalainen, on this list either. He’s out in Finland getting ready for the season to start with HPK and shooting bizarre promos.

The full list of players is available on the Jets website, and we’ll have a breakdown of each game right here at Jetsnation. With a few days between now and puck drop in Penticton, let’s pull this roster apart a bit.

As mentioned, there are no superstar forwards on this list, no first round picks even, but there are a few players who terrorized major junior this past year. Invitee Tyler Bolland is coming off a 48-goal, 103-point campaign with the Rimouski Oceanic, but regardless of how his rookie tournament goes, he’s committed to join a dominant UNB Varsity Reds program in the Canadian University circuit this year.
Advertisement
Ad
Advertisement
Ad
Speaking of UNB, former Varsity Red Beauvillier turned pro with the Manitoba Moose this year and posted a respectable four goals and five points in nine games. He’s one of the older players on the roster and brings good size at 6’2 and 197 pounds.
Another player bringing good size is Mason Appleton, and for many Jets fans, this will be the first look at the sixth round pick from 2015. Fresh off a strong sophomore year with Michigan State in which he posted 31 points in 35 games, Appleton will be attending his first rookie tournament and pro training camp.
Some other familiar names grace this list. Jansen Harkins, who put up four points in four games with the Moose at the end of last year, and Michael Spacek, who led the Red Deer Rebels with 85 points in 2016-17, will both be key cogs in the Jets offensive attack at this tournament.
Advertisement
Ad
Advertisement
Ad
Another player to keep a close eye on is Jordy Stallard. A skilled forward with size, Stallard was having a solid offensive season in the WHL before an injury put that on ice. This year will go a long way toward determining his future with the Jets, and he’ll want to start it on the right foot.
Perhaps the most intriguing of all the Jets’ invited players is Rickard Hugg, who went undrafted despite putting up impressive numbers in Sweden’s junior league. He’ll be with the Kitchener Rangers of the OHL this year, and bears watching for the future as he’s one of the youngest players on this roster as a 1999-born forward.

Advertisement
Ad
Advertisement
Ad
Also worth keeping an eye on is Kristian Reichel, who, much like Spacek, played pro hockey in the Czech Republic before getting drafted by Red Deer in the import draft. The son of Robert Reichel will be in North America this season and got off to a flying start to the WHL preseason.

Kristian Reichel had a hat-trick for the @Rebelshockey in their 5-3 win over @WHLHitmen. #WHL

Finally, look for Skyler McKenzie, one of only two players on the roster from the Jets 2017 draft class, to mix it up away from the play and contribute offensively. The undersized but skilled Portland Winterhawk (have we heard that before?) was a 42-goal scorer and a noted pest last year.

This is where things get interesting. Jets fans won’t see Dylan Samberg here, due to his college commitment, nor will they see Johnny Kovacevic, but they will see one of the deeper blue lines the Jets have iced at this event.
Advertisement
Ad
Advertisement
Ad
First rounder Logan Stanley is coming off an up-and-down showing for Canada at the World Junior Summer Showcase. He’ll be looking to play more like he did against Sweden and less like he did against the United States.
Stanley is the biggest player on the team, as you might expect, but it’s a big blue line in general for the Jets. The smallest player on the back end is 2016 draftee Luke Green, who is still six feet tall and whose smooth skating stride will be a treat for Jets fans to watch. You can expect him to see some power play time as well.
The backbone of this back end, however, will be Tucker Poolman. A do-it-all defender for UND last year, it’s good to see he’s healthy enough to go for this tournament after undergoing double shoulder surgeries in the offseason.
Advertisement
Ad
Advertisement
Ad
Those who have yet to get a good look at Poolman will be impressed by his shot and puck movement, and by his mean streak. Poolman is very adept at the reverse hit, being strong on his skates and having plenty of size on his side. He’ll be intimidating for forecheckers ahead of his first pro season.

Tucker Poolman is no stranger to the physical game, and he can pile up points as well. Photo: © Brad Rempel-USA TODAY Sports
Many Jets fans were thrilled with the drafting of Leon Gawanke in the fifth round this year, and given his point totals in Cape Breton, he seems a very shrewd pick at that spot. He is one of the youngest players on the roster, but it will be good to see what he can do against players who will often be as much as six years older than him.
As for me personally, I’m most excited to see Sami Niku lace up the skates in a Jets sweater for the first time. Niku was injured at the last development camp I attended (I was unable to attend this year’s) but his play in Finland is more than enough reason to be excited about him.
Advertisement
Ad
Advertisement
Ad

Sami Niku (20 yo) just finished his 4th season of men's hockey in Finland. He was 7th in scoring among Liiga defenders. Small, savvy player.

A left shooting defender taken in the seventh round in 2015, Niku coming over to North America and joining the Jets in any capacity, even in the AHL, is already a win. The Jets are playing with house money in taking Niku 198th overall, but his recent play in Finland indicates he could be very valuable to them in the long run. His size (6’1, 194 pounds) and puck moving, intelligent playing style lend themselves to the modern game.

Jamie Phillips is familiar to Jets fans by now, having played exceptionally well in the ECHL and serviceably in his call-up to the AHL. If this were a regular team and not a showcase team, you’d have to think he’d be the starter.
Advertisement
Ad
Advertisement
Ad
The Jets may have made another steal in netting Mikhail Berdin in the sixth round of the 2016 draft. With a .925 save percentage in the USHL last year, Berdin has adjusted nicely to North America and has the size expected of a modern goalie. While he’s undoubtedly a project, the project appears to be coming along nicely.

Mikhail Berdin stopped a ridiculous 57 of 58 shots tonight. This is only topped by his 59/60 performance back in October https://t.co/qT6bg2mWPn

Don’t expect to see too much of Altona, MB native Cole Kehler, as the Jets will want as long as possible of a look at Berdin and Phillips. Still, the Portland Winterhawks netminder may well get some time in the crease, as his record in Portland this year was an impressive 32-17-3. He also put up a respectable .910 save percentage in 2016-17.
Advertisement
Ad
Advertisement
Ad
This young stars roster is a bit different than the ones we’re used to, which were often loaded with first round picks and high-flying, free-wheeling offensive forwards. That said, the depth of this year’s roster and some inventive, shrewd invites by the Jets bode well for a good tournament. We’ll keep you up to date on all of it here at Jetsnation.