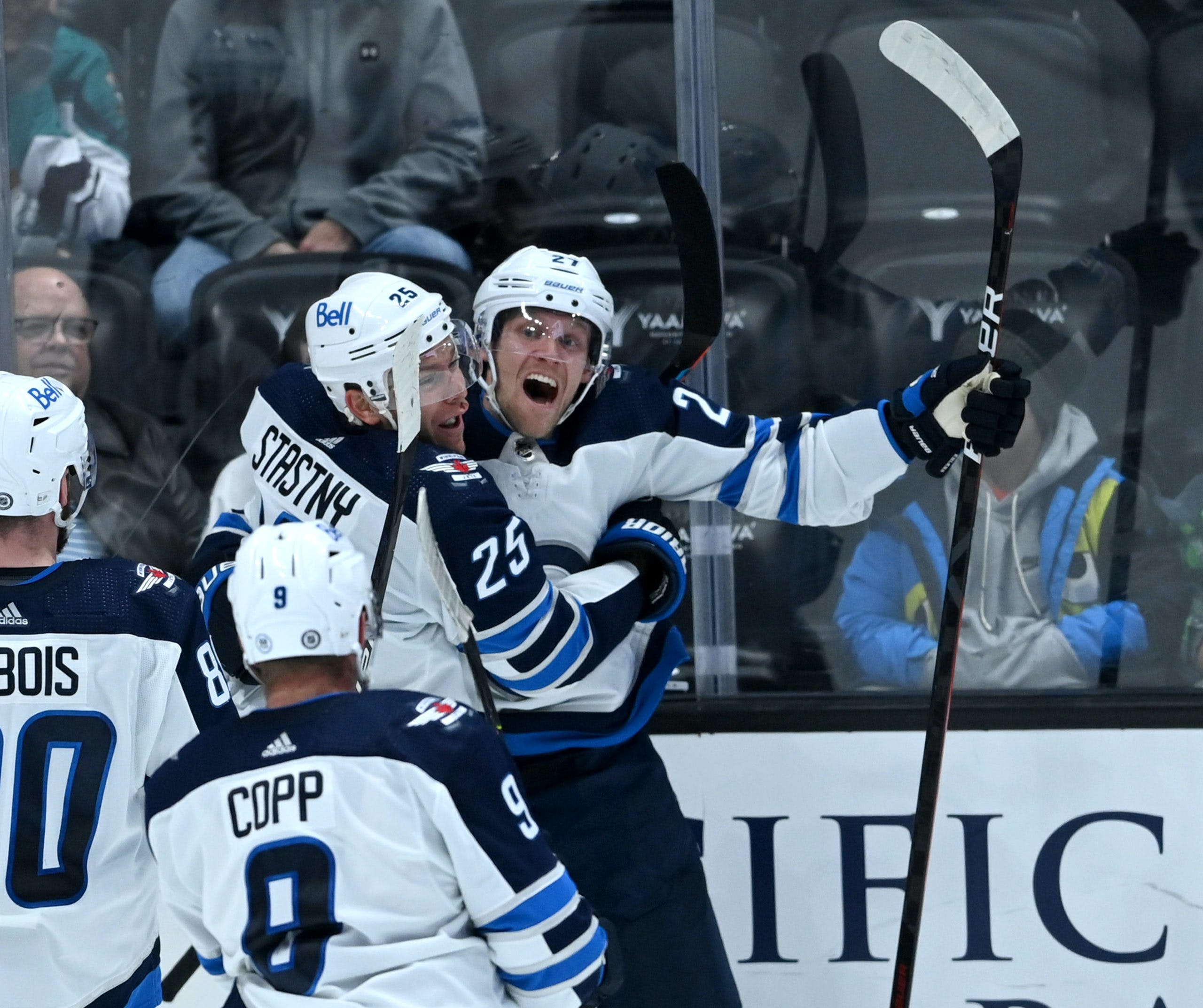 Did everyone sleep well following that late-night thriller Tuesday? No? Yeah, chances are most fans of the Winnipeg Jets endured a difficult time coming down from the exciting comeback moment that occurred around 11:30 pm CT.

Now that everyone, hopefully, has received a chance to sleep on the Jets’ memorable 4-3 victory, it’s time to revisit how this team reached that point during its final matchup of the 2021-22 season against the Ducks.

Following a scoreless opening 20 minutes, forward @Evgeny Svechnikov broke this tie game with his first goal in a Jets’ uniform, handing his club a 1-0 advantage early in the second period. Unfortunately, that one-goal lead didn’t last for very long as @Trevor Zegras picked @Nate Schmidt’s pocket in the corner and quickly advanced the puck over to @Sonny Milano, who one-timed that pass into the back of the net.

With the ice opening up significantly in the third period, this allowed Winnipeg and Anaheim to trade goals early in the final frame, creating a 2-2 tie with just under 15 minutes remaining in regulation. Landing the next strike just past the midway point of the period, Zegras capitalized on a turnover from @Pierre-Luc Dubois, scoring his team’s third goal of the game.

Though all had seemed lost with less than two minutes left on the clock, @Nikolaj Ehlers took it upon himself – as he normally does – to carry the Jets back from defeat by scoring a pair of goals in just 19 seconds apart, allowing his club to complete the comeback.

As for what stood out during this thrilling contest, here are three takeaways from Winnipeg’s third straight victory:

Nikolaj Ehlers Breaks Through in a Massive Way

The Danish superstar is goalless no more! And his first two goals of 2021-22 couldn’t have come at a better time for Winnipeg.

Despite failing to register a single goal through the first five games of the season, Ehlers’ luck changed most heroically Tuesday night, as he ushered his team back from what looked to be a disappointing 3-2 defeat. Luckily, the 25-year-old had other plans for how this contest was going to finish.

After the Jets were finally able to create an offensive zone face-off, @Andrew Copp won the draw and tied up his counterpart on the dot, allowing No. 27 to grab the loose puck before firing it on net from a low-percentage angle. Thankfully, the bounces fell the left-hander’s way for a change, which saw the puck narrowly sneak past Ducks goaltender @John Gibson for the score.

Two goals 19 seconds apart and the @NHLJets pick up the W. pic.twitter.com/ocRAOm52fq

Then just 19 seconds later, from the same left side of the offensive zone, Copp won another face-off and dished the puck over to Ehlers, who quickly blasted it on goal from the right face-off circle. Even with two bodies in front, the puck deflected off @Jamie Drysdale’s leg and found its way into the net for the game-winning goal.

Adding to his impressive performance, before the former first-round pick potted two unanswered goals, he helped set up a phenomenal tic-tac-toe style score earlier in the third period by leading a rush into the offensive zone. Shortly after crossing over the blue line, he passed the puck into the slot for @Paul Stastny, who immediately tapped it over to Copp for a one-timer.

All in all, things couldn’t have played out any better for Ehlers at the Honda Center on Tuesday.

Connor Hellebuyck Provides Winnipeg With an Opportunity to Win, Again

Coming as no surprise to anyone, the Jets likely wouldn’t have possessed a chance to mount a comeback against the Ducks if not for the stellar performance from goaltender @Connor Hellebuyck.

Despite facing 35 shots against, 28 of which occurred through the first 40 minutes, Hellebuyck stopped all but three of the attempts that he faced and kept his team in the game when it mattered most. In particular, the 28-year-old didn’t allow a single goal from a high-danger area, making nine separate saves of that variety throughout this contest.

Most notably, even after Winnipeg had taken a one-goal lead late in regulation, Anaheim’s skaters turned up the heat once they gained possession of the puck in the offensive zone. Since the 6’4″ netminder’s teammates failed to alleviate that pressure, which saw them struggling to clear the puck down the ice, he was forced to stop multiple different quality scoring chances before the final horn sounded.

If not for a trio of turnovers inside the defensive zone, there’s a fairly strong chance Hellebuyck would’ve been able to hold the Ducks scoreless through all three periods, likely earning himself his first shutout of the campaign.

Granted, the Jets received incredible performances from Ehlers and Hellebuyck Tuesday night, however, those remarkable showings were almost undone by three separate turnovers that ultimately led to scoring opportunities for the Ducks.

Starting in the middle frame, Schmidt was attempting to recover the puck along the boards in the defensive zone when Zegras lifted his stick from behind, allowing him to gain possession in the corner. In turn, this provided Milano with an opportunity to blast home his first goal of the season, tying the score at 1-1.

Then in the third period, where all the chaos ensued, Dubois lost control of the puck while attempting to spark a line rush out of the defensive zone. As a result, Anaheim’s skaters regained possession and cycled the puck around to the point, where @Josh Manson blasted one home to hand his club a 2-1 edge.

Just over 10 minutes later, Dubois found himself in another tough bind as he retrieved a dump-in below the red line, but rather than sending the puck around to the other side of the net, he attempted to slide it over to @Neal Pionk, who was positioned just to his right. Sadly, Milano intercepted that pass and quickly sprung Zegras for an easy score in the slot.

Even though Winnipeg still came away with the victory, all three of these goals could’ve been avoidable if Dubois and Schmidt were more cautious with the puck – an aspect that must become a priority moving forward.