With competitive window shrinking, it’s time for Jets to seize this current opportunity 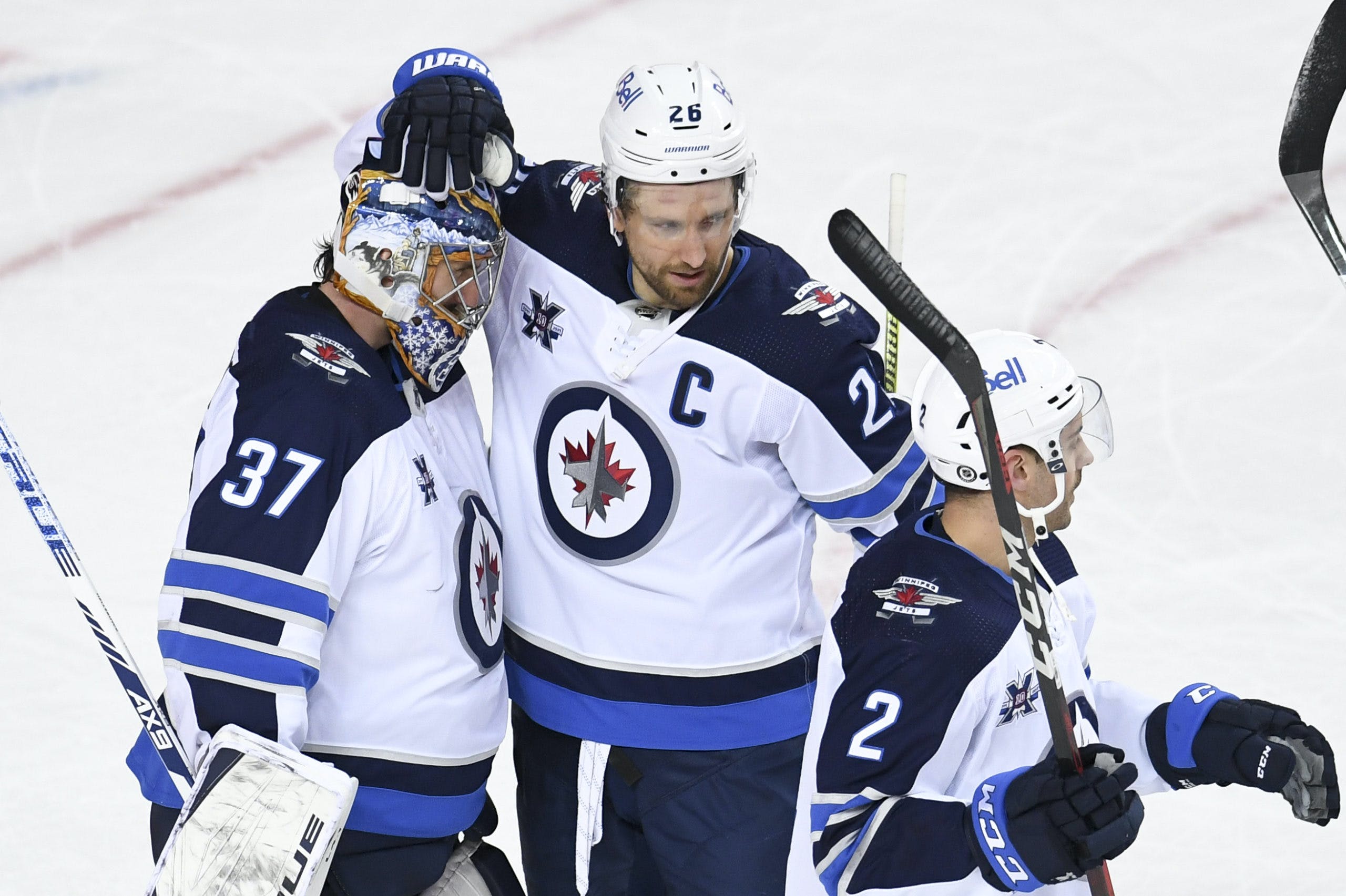 By Angus Hout
1 year ago
On Day 2 of training camp, the Winnipeg Jets made @Connor Hellebuyck and @Blake Wheeler, among others, available to the media. Overall, their comments were fairly positive, but there was one major takeaway from each of their press conferences, time is running out for this team to make a serious run at a Stanley Cup.
It’s now been three seasons since the Jets appeared in the Western Conference Finals, and no one is getting any younger here, especially when it comes to the club’s team captain. Entering his age-35 season, there’s no question Wheeler isn’t a young skater anymore, and hasn’t been for some time now, meaning he might not be that far away from the R-word. Yes, retirement.
With that in mind, let’s explore how Wheeler and Hellebuyck are feeling ahead of the highly-anticipated 2021-22 season.

Starting with Hellebuyck, the 2019-20 Vezina Trophy winner was asked for his thoughts on the Jets’ current roster and replied with, “I’m really excited for the season. I’m always excited to come back to play hockey, but this one it feels like we really sold the farm and we’re really going for it. Every year that’s my mindset, but everyone else [the other Jets players] has the same mindset. I’m excited to see what we can do and I’ll give it my all.”
Winnipeg’s starting goaltender was also asked if the team feels different this year because of all the new faces that’ll be joining the club and stated, “I don’t know if it feels different, but we have a slightly different mindset going in. We’re getting older and not any younger – our time is running out.”
These two statements get me really excited. The best player on the Jets believes in this team every single year no matter what. Hellebuyck knows this club is close, but the window is closing on them with some of the core starting to age out.
As for the 2022 Winter Olympics, Hellebuyck was asked if he’s changed his mindset considering he could potentially become Team USA’s starting goaltender, and replied with, “I haven’t put too much thought into the Olympics. I’ll have a moment if I’m selected to be on their team and it would be a great milestone to play in the Olympics, but I have one thing on my mind and that’s to win a Stanley Cup. When we get closer to the Olympics, I’m sure my mindset will change but right now I’m focused on winning a cup.”
I know talk is cheap, but when you have only advanced to a Western Conference Finals once in your career, there’s obviously going to be some extra motivation involved when you’re about to enter your age-28 season. When you listen to Hellebuyck, there’s some extra confidence in his voice and the way he talks gives me hope the Jets are in very good hands.

Asked about this past off-season, Wheeler discussed, “We’re definitely excited with the off-season. It’s definitely a change from what we’re used to. We haven’t historically had off-seasons like that, so I think that gives some of the guys who have been here for a while a little extra boost going into training camp.”
I’ll point out the obvious, the Jets experienced a much more exciting off-season than usual. Wheeler knows it, and the front office trusts him to be the leader of a team that’s putting all of their chips into the middle of the table this season.
As for how this current group looks, Wheeler, well, provided a blunt response, replying, “I‘ve skated with these guys one time… Let’s play some games because ‘on paper’ doesn’t mean a thing. The best team on paper isn’t the team that wins. Tampa Bay has some talent and they had talent when they were swept by Columbus [in 2019]. So there’s way more to it than that. On paper we look pretty good, but it doesn’t mean anything.”
That quote is why Wheeler is one of the better captains in the NHL. He knows how good this team looks, but, also knows that it just takes one bad apple to wreck the entire group. Hopefully, this team won’t have to worry about anything like that, however, that’s usually why the schedule is normally compared to a marathon and not a sprint.
Asked if featuring multiple veterans on the roster could remove some of the pressure off him, Wheeler replied, “Leadership is a shared identity, the best teams have layers of that. It’s not just on one or two guys, you have it throughout your lineup. When you get into your mid-to-late 20s, you need to start stepping up and we’ve got guys who’re in that position now.”
The time is now for this current group that’s played and grown together. They have veterans who’ve played on competitive teams, who display quality leadership traits and want to win a Stanley Cup. In addition, there are also some quality rookies on the roster who can grow from some playoff success.
Lots of key moves occurred over the summer for the Jets, and though it’s early, this team seems ready to handle any issue that’s thrown at them. From these interviews, there’s clearly a healthy mix of cautious optimism and positive mindsets within the organization. This is the Jets’ year, and the boys appear ready.
Uncategorized
Recent articles from Angus Hout