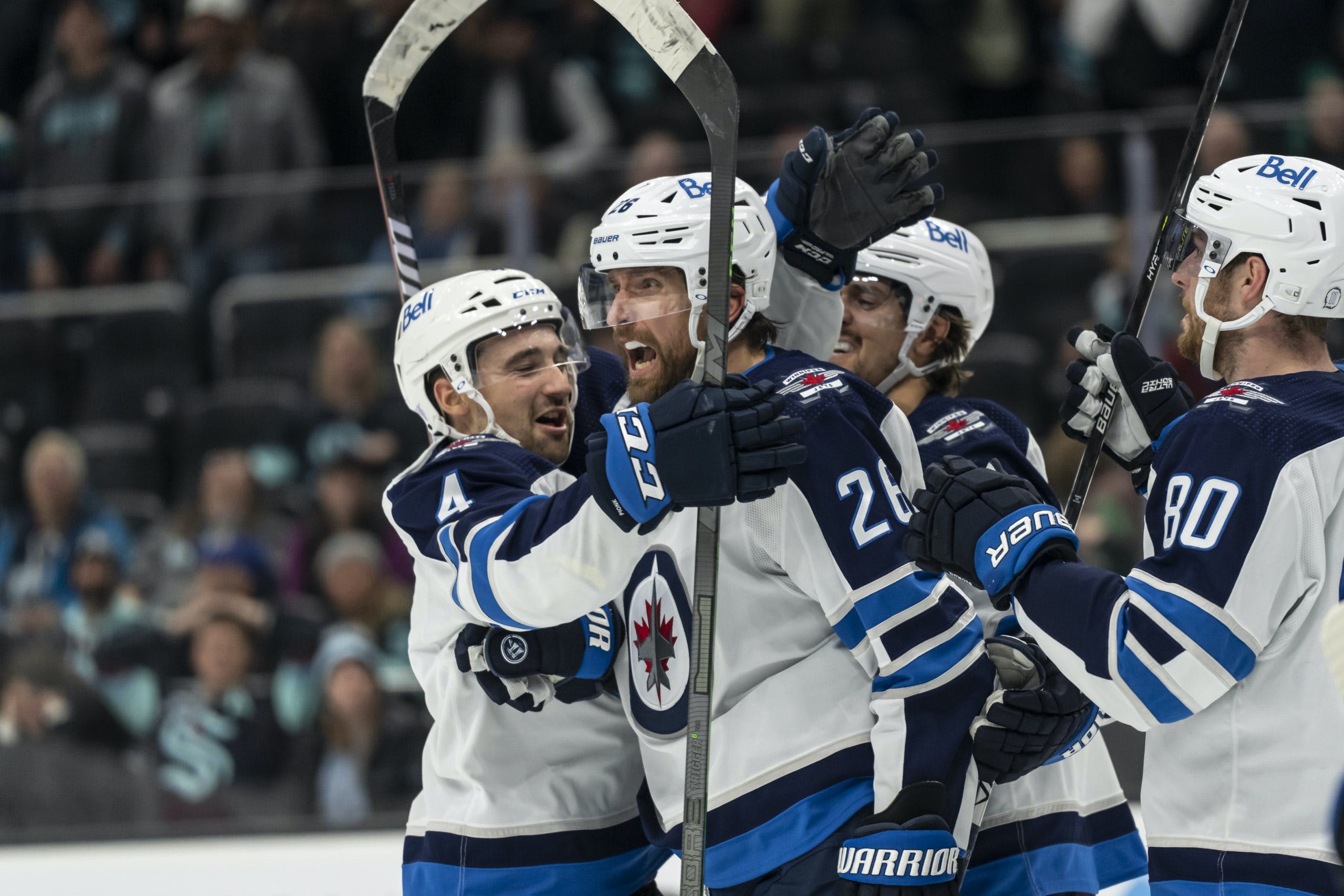 By Angus Hout
1 month ago
Be sure to check out NHL lines site Betway for all the latest Winnipeg Jets Props!”
We are right around the quarter mark of the the Winnipeg Jets season. I think we can safely say the Jets might not be a bad team. The Jets are 13-6-1 and have played extremely well. Let’s give the Jets players their quarter-season grades. The only stipulation is the player has had to of played at least 15 games with the Jets this season.
Josh Morrissey. A+
Josh Morrissey was awarded Second Star of the week on Nov.28. He has gone from a complementary player to a true top-pairing defenceman. Morrissey is on pace for a career-high in points with 92. His previous best is 37 from 2021-2022. Morrissey has been a contributor in both 5-on-5 and power play metrics.  Morrissey has been the Jets’ most consistent player in the club this season.
Kyle Connor. B-
Although Kyle Connor has the second most points with the Jets he had a very cold start to the season. Connor would take 10 games to score his first goal with a goaltender in the net and 15 games to score five goals. Connor has scored six goals in his last six games. Connor has felt the effects of Ehlers’ injury not being able to set him up for big points.
Connor has needed to learn how to play with Mark Scheifele and a revolving door of linemates. We will see a much better Connor this next quarter of the season if he is playing with Pierre-Luc Dubois and Cole Perfetti.
If you mix the cold start with the defensive liability that Connor can be gives him the mark he got.

Dubois has been quietly having the best season of his career and is slowly turning into one of the best pests in the NHL. The man was wise signing a one-year deal as he is on pace to 80 points, 19 points more than his previous high in 2018-19. PLD has been responsible for 7 points out of 13 during the powerplay, he has been a thorn in many team’s sides drawing the most penalties in the NHL this season.

I don’t know how I keep tricking myself into thinking Scheifele is going to be 100 point player almost every season. Scheifele would come out of the gate red hot but has cooled off in the last few games. I would say Scheifele has disappointed with a lack of consistency.
Scheifele has made major improvements from last season and has made more of an effort with his 200-foot game. I still feel like we can see more out of Scheifele.

Adam Lowry has been a rock for the third line and his team. Lowry has been a physical force for the Jets with 45 hits through 20 games and has only spent six minutes in the penalty box this season. The third liner has been instrumental in the Jets’ success on the penalty kill. Lowry has also been a great leader and has stood up for many of his team mates
Lowry like many other Jets is on his way to crushing his points record. Although Lowry may never beat Mario Lemieux’s season short-handed goal record of 13 he could score more short-handed goals than some teams by the end of the season.

I’m selfish and want to see more out of the rookie Perfetti but he is tied for seventh in rookie scoring. Perfetti has looked solid and has been putting himself into less dangerous circumstances. Perfetti shows off his hockey IQ regularly and has been a passing machine.
Perfetti has been shooting more this season and has been more effective without the puck. As the season moves on we will see a whole lot more production out of the 2020 10th overall draft pick.

I thought I was going to give Pionk a lower grade because I haven’t loved his defensive game. He’s made a few boneheaded mistakes that have resulted in goals against or big chances against.
Pionk has a chance to surpass his offensive numbers and many of his defensive numbers as well. Pionk has also scored some big clutch goals this season including his first overtime winner.  Pionk has played 35 minutes of power play time and has been that helpful but he has been helpful when he is on the penalty kill.
Pionk plays big minutes for the Jets’ defence and should be recognized for it. Much like Scheifele and Perfetti, I feel like there is another from the Jets defender.

Sam Gagner has done everything you could expect out of him. He has played on every line and fit in, and has been put into every situation imaginable. Gagner is having one of his best years defensively. The Rick Bowness system works well with Gagner’s skills without the puck.
Then you look at the 33-year-old production numbers and he only has six points playing an average of 13:45 a night. How do you play in the top six for six games of the season and play on the power play and only manage to get six points?
Gagner’s defensive game has been great but I had higher expectations for him to score a little more for the Jets this season.

Just because you score twice in one game recently doesn’t mean you’re going to get instant love on this grading scale. Saku Maenalanen has been a welcome surprise to the Jets line-up. Adding size and energy to the fourth line. Unfortunately, that success hasn’t translated well to the third line with Lowry.
I would be happier to see a little more out of Maenalanen points production wise but overall he has been a good addition to the Jets and has managed to play in every game with the club. Being prolific on the penalty kill and bringing a spark to the fourth line Maenalanen has been a great fourth-line winger. If Maenalalen wants to bring up that grade be more physical.

The shutdown defensive pairing has been one of my favourite duos on this team this season. Brenden Dillon brings an important meanness to the Jets club. Nate Schmidt brings good energy to this team. This Ying and Yang match-up haven’t been scoring a whole lot only scoring four goals between the two of them.
The mentorship the two men bring to the line-up is unquantifiable but it is very important to the younger Jets defencemen. The two have only allowed four penalty-kill goals against and have been eating up a ton of minutes to let the sixth defender be as comfortable as possible.

Axel Jonsson Fjällby(AJF) has been another diamond in the rough find for the Jets this season. AJF has added speed to the bottom six and has looked good on the top line with Scheifele and Connor in his two games with them. AFJ only has two points to start this season.
Being a spark plug and great fore-checker for the Jets has been a great addition but we do need to see a little more scoring out of him especially if he does get to play more in the top six.

Dylan DeMelo is another mentor for the younger defencemen with the Jets, and he has been amazing for them. Dylan Samberg and DeMelo have been a decent pairing together
DeMelo’s stats are basically the same as last season even though he is playing with rookies on the third pairing. DeMelo is probably the only real defensive defenceman with the Jets and he shuts it down regularly.  Without DeMelo the penalty kill probably wouldn’t be in the top 10 in penalty kills.

Connor Hellebuyck has returned to Vezina form! With a 10-5-1 record in his first 16 games, there isn’t much to criticize about the Jets starter. He is having one of his best starts to a season. His puck handling behind the net has come a long way over the summer, I’m almost not worried when he leaves the net.
According to Frozenpool.com Hellebuyck has had quality starts in 75 percent of his games and owns two shutouts this season. This type of play should be expected from Hellebuyck and it’s good to see him back as the best NHL goaltender. You feel like most every night that Helle is between the pipes the Jets have a great chance to win. Hellebuyck has been the Jets’ best player all season long.
Editorials
Recent articles from Angus Hout