Why Edmonton and the Oilers Are a Joke 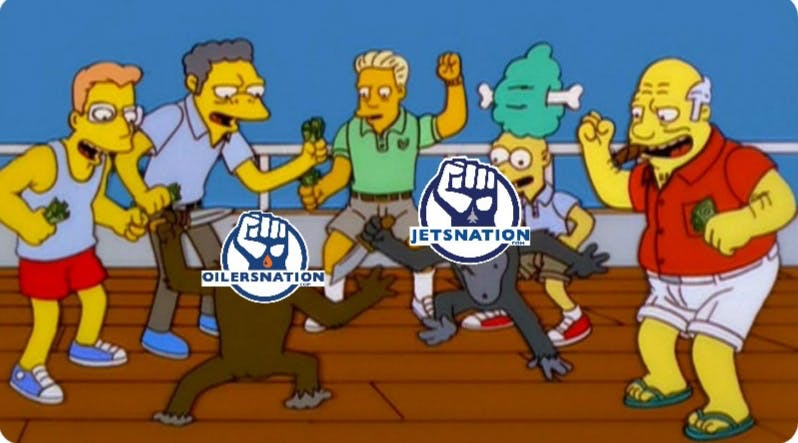 By Angus Hout
1 year ago
I was going to let the Edmonton Oilers and Oilersnation have their fun in the playoffs, while we laugh and upset them. But my buddy, Baggedmilk, wrote an article at Oilersnation called, “Why you should hate the Winnipeg Jets.” I grew up around Edmonton, lived in the city for a year, then moved to Manitoba five years ago and also lived in Winnipeg for a year. So I know what city and team is far more superior. We might live in “friendly Manitoba,” but you can’t disrespect us without catching these takes. Let’s get this rivalry going.

Tired of Edmonton Acting Like They’re Better Than Us

For years, Edmonton has acted like it’s better than Winnipeg. When it comes to cities in the Prairies, Edmonton plays second fiddle. In 2018, there was a real CTV Edmonton News segment about the Oilers having to drive into Manitoba to play the Jets from Fargo, North Dakota. Don’t believe me, checkout this little beauty. Clearly, Edmonton can’t get simple facts about Winnipeg right. This wasn’t even satirical, it was a real new cast – you want to seem like a legitimate city… get the news right.
The Jets might have been gone for 15 years, but the Oilers we’re the laughing stock of the league for those same 15 years.
Since the start of the 2006-07 season, the Oilers have been the laughing stock of the NHL. They drafted @Taylor Hall, @Ryan Nugent-Hopkins, @Nail Yakupov (yikes on that one) and @Connor McDavid. All of which were first overall picks and they’ve only made the playoffs three times since 2006. One of those times was only the play-in round. They have wasted six years of McDavid’s career. How do you manage to waste one of the most talented players’ careers and act like it’s fine. Let’s also talk about that time they lost in the play-in round in four games to the Chicago Blackhawks. How can you lose to such a bad team in four games with some of the best offensive talent in the league? It’s because you’re a joke team with only two legitimate players.

You’re No Longer the“City of Champions”

In 2015, the city of Edmonton took down the signs going into the city that said, “City of Champions.” You know why? It was because that city put all of their faith into two teams and then those teams started to live on their past glories from the 80s. Do you know who else lives on past glories? That guy you went to school with who never moved on, but you definitely laugh about him still wearing his class ring and letterman jacket. That’s the Oilers every time they brag about the “team of century” and remind you they won five Stanley Cups in seven years. The last time they won a Stanley Cup was 31 years ago. And they wont let 2006 go, we get it, you were one game away from winning but they lost. Get over it Edmonton, you’re a joke of a city with a joke of a team.
Uncategorized
Recent articles from Angus Hout