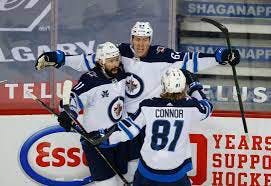 By Angus Hout
1 year ago
Saturday night with 13:41 left in the second period, @Logan Stanley scored his first-ever NHL goal against the Calgary Flames. Congratulations to the big man for getting his first goal and honestly, what I would say would be a successful first season in the NHL.
The guy isn’t going to win the Calder Trophy, but he’s a solid third-pairing defenseman. He won’t put up points, but he will throw a big hit, block some shots and will be a big presence when there’s a scrum around the net. We should also mention how great of a smile he has and when he shows it off on the ice it brings a smile to my face. Look at that smile in the photo we’ve got for him.

I think he’s sort of replaced @Dustin Byfuglien. I know there are tons of obvious differences and that phrase could get me run out of Manitoba. What I mean by it is he’s got a presence in the back end where he can calm things down, not because he’s angry or mean but because he’s so big that guys generally don’t want to mess with him. How many times have we watched someone try to hit Stanley and they just fall down because he’s just too big.
He might not be the best fighter out there, but he’ll scrap and stand-up for his teammates. Last season while playing for the Manitoba Moose, Stanley got into four fights and stood up for his teammates and himself. If you want a winning team, you NEED to have a guy like what who’s out there and policing the game, that’s what Byfuglien did. Everyone wants Byfuglien back, well here’s a guy who can do some of the same things but also bring some other attributes to the game. Again, Stanley is an NHL rookie with tons of potential and he won’t be Byfuglien, but he’s filled a role that needed to be filled.
Stanley only averages 12:22 of ice time per game, but he’s noticeable when he’s on the ice. Sometimes that’s a good thing, other times not so much. Sometimes he looks like he owns the ice and other times he looks very uncomfortable. That’s fine because he’s a rookie defenseman, he’s going to grow, get better and start taking up more ice time and learn how to take up more of the ice with his big 6′ 7″, 225-pound frame. He could be a solid shutdown defenseman, that will come in time as he gains confidence. To be noticeable early in your career is a good place to be, especially as a defenseman.
The last thing I love about the big man is his passing, he makes these long-ice passes to get the puck out of the defensive zone and sometimes that can turn into scoring chances. I know the plus-minus is pretty much a useless stat, but the guy is a +11 with only two points. So he has to be doing something right. Even if those passes aren’t turning into points, he’s doing a good job defending and doing the right things that get the Jets points in the standings.
So long story short, I like Stanley’s presence on the ice and the fact he can help police the game. Even if he’s not the best fighter, I like that he’s noticeable on the ice even when he looks uncomfortable and his passing game is solid as a rookie, and he’s got that good smile. He won’t have a ton of points, but he will be a core piece in whatever NHL team he plays for, hopefully with the Jets for a long time.
Let me know in the comments below or hit me up on Twitter or Instagram if I’m spot on with my thoughts on Stanley or if I’m way off.
Uncategorized
Recent articles from Angus Hout