Three thoughts too many: Why is David Rittich the whipping boy, Dylan Samberg scores his first goal, who has the second most points for the Jets? 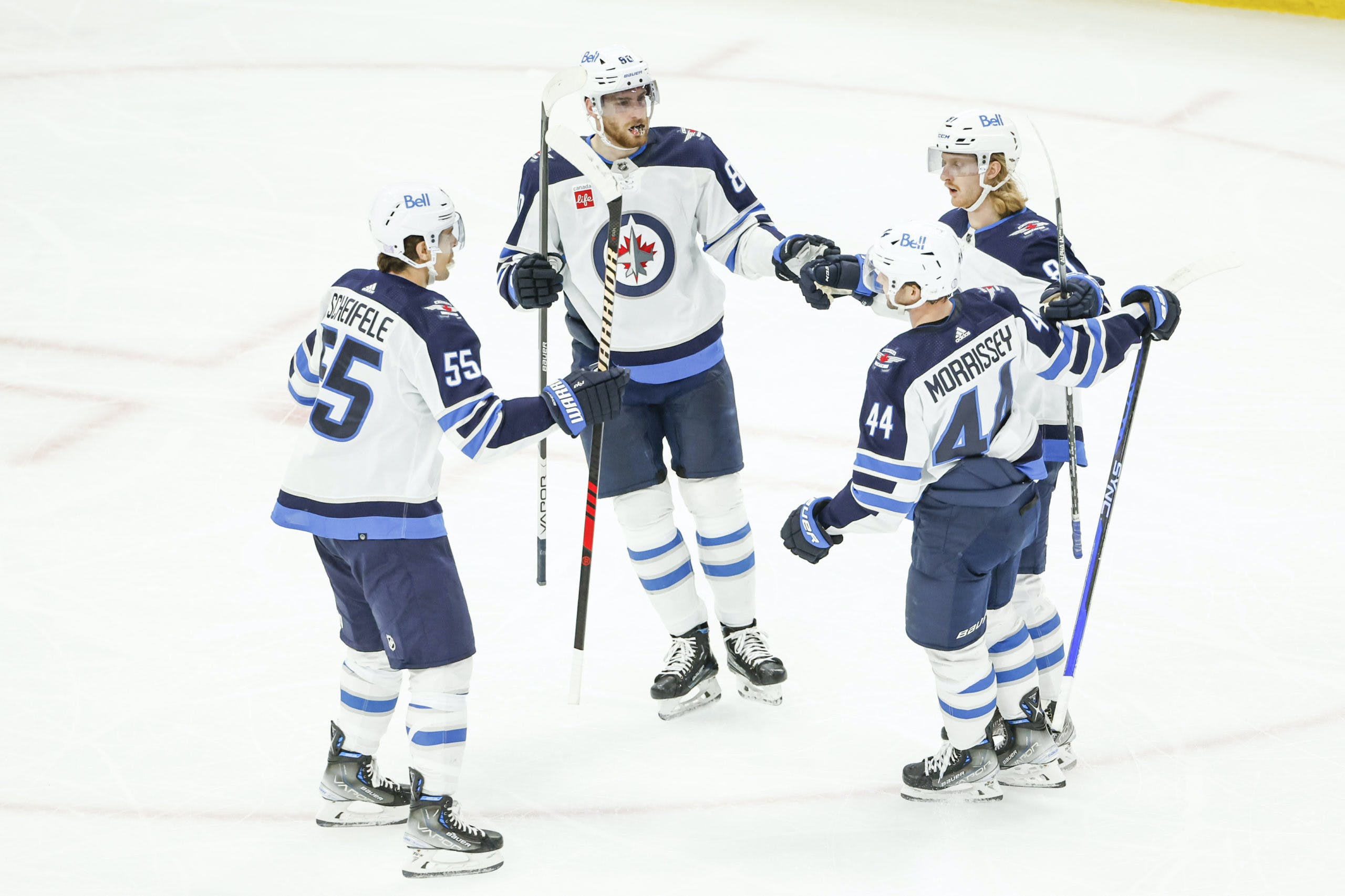 By Angus Hout
1 month ago
Welcome to Jets Nation brought to you by NHL bets site Betway! A few weeks have passed since the last time I had three too many thoughts about the Winnipeg Jets. Lot has happened with the Jets in the last few weeks but overall they have won a lot of games and points percentage wise they are the best team in the Central Division.

David Rittich has been a controversial figure within the Jets line-up this season.  Some folks want him out of town and others believe that the Jets players haven’t played well in front of him. Rittich wasn’t the big sexy signing we were hoping for this season. The man had been on a steady decline through the last few seasons and General Manager Kevin Cheveldayoff grabbed him on July 13th for 900k on a one-year contract.
Rittich has had a large pair of shoes to fit into coming into Winnipeg the last two back-ups were fantastic. Eric Comrie would post a 10-5-1 record with a.920 save percentage and a 2.58 goals-against average in his final season with the Jets. Laurent Brossoit would go 6-6-0 post a goals-against average of 2.42 goals against average and a .918 save percentage. Rittich starting his time with the Jets produced a .881 save percentage and a 3.07 goals-against average some folks are concerned about his play. I can’t blame them in Rittch’s games according to naturalstattrick.com the Jets have had an expected goals-against average of 1.62.
If you watch the goals against Rittich they’re not bad goals against I stand on side of the good old eyes test with Big Save Dave. I would argue that Rittich has been left high and dry by his team on the vast majority of goals. There’s been a lack of back-checking from the defenders, or guys have failed to block a shot and haven’t moved opposing players to move out of the way or team breakdowns with less than five minutes left in the game.
Don’t believe me? Go watch all of his goals against and tell me how many are on him making a bad play. I’d be willing to bet it’s less than two goals a game that are his fault. On paper, it’s very easy to see a bad player in Rittich but when you look at the plays that happen in front of him you will a guy who is getting screwed. Long and short don’t make David Rittch the whipping boy for the Jets.

Dylan Samberg has scored his first NHL goal! It was the game-tying goal in Sunday night’s 5-2 victory over the Anaheim Ducks. Rick Bowness has wanted to see more shots from the rookie defenceman. That thought would be carried out in the win over the Ducks as Samberg would fire four shots at Ducks goaltender Anthony Stolarz.
Samberg a 23-year-old rookie scored in his 33rd career NHL game and has pocketed six assists. Samberg is second in blocked shots with the jets with 36 and ninth in hits with 25 with the Jets club. Can the Jets rookie defensive defenceman become a scorer for the Jets if he starts firing on the net? 100% I do, the guy has a sweet wrist shot and has rung at least two pucks off the post this season. If he’s not scoring that’s fine, Samberg has a bright future ahead and hopefully is a long-time Jet.

Kyle Connor is quietly having himself a year.

Kyle Connor started the season slower than molasses in January and folks noticed. Connor would only manage to score four points in his first nine games of the season all the claims that he would score 50 goals this season quickly went out the window. In his last nine games, he has scored 19 points and managed to score 3 points in three different games in that time. At this point in the season, Kyle Connor is a point-per-game player this season. If you don’t have the Michigan-born player on your fantasy you might want to get on that asap.
Last season Connor would have  24 points in 23 games a single point more than now.  There’s less hype because he had 13 goals rather than the eight he has now. Assists get you less love in the press. The goals will come soon from our favourite ginger he’s only shooting at 10 percent right now his career average shooting percentage is 14.9 percent. While the goals may not be coming fast, his defensive game has taken a massive step forward. Connor’s Corsi For percentage is 59.5 that’s 3.1 percent better than ever before.
Connor is the second-highest-scoring player with the Jets with a total of 23 points (8G,15A). If Connor could fly under the radar for the rest of the season, he could be one of the biggest and quietest weapon the Jets could deploy during a playoff run.
Editorials
Recent articles from Angus Hout