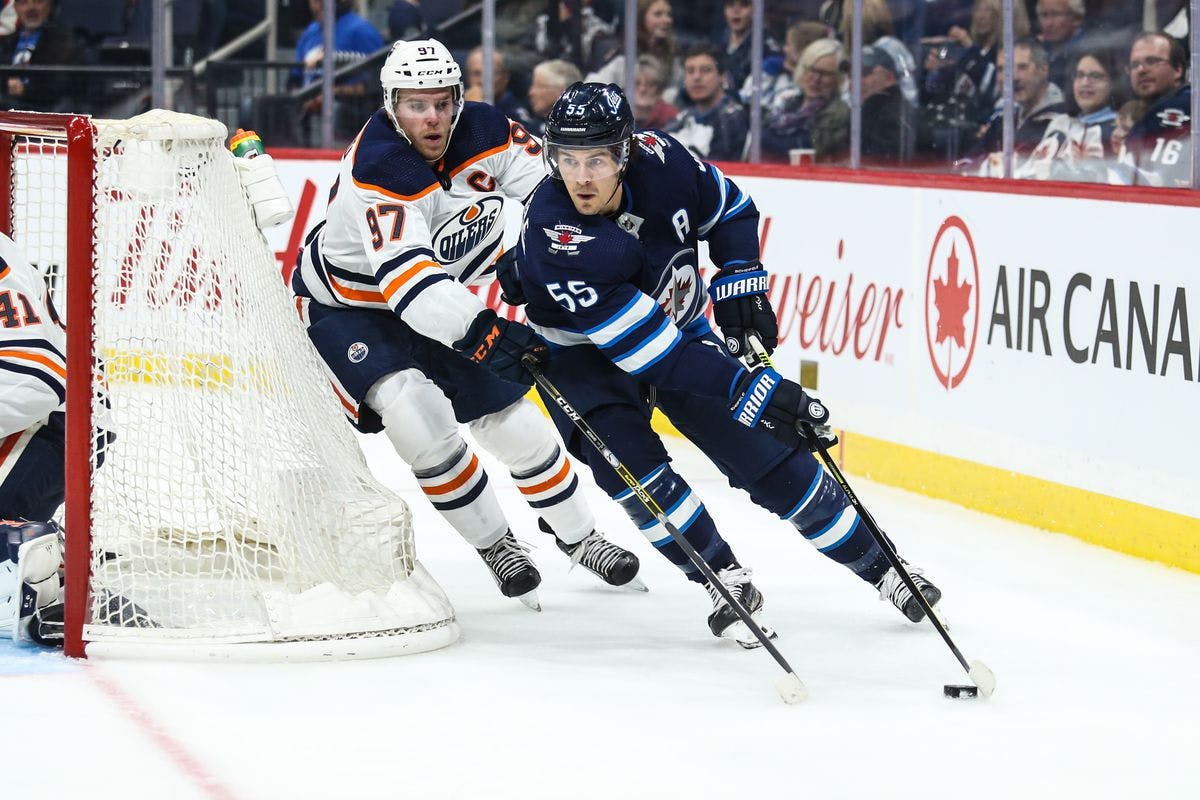 By Thomas Hall
1 year ago
Coming off a tough 4-3 loss against the Edmonton Oilers, as they allowed the game-winning goal with just 0.7 seconds left on the clock, the Winnipeg Jets will be striving to exact some revenge on Tuesday night at Bell MTS Place.
Slated to play their sixth game in nine nights, the Jets are about to receive some much-needed rest, but they’ll first be tasked with facing off against the Oilers for a second straight game. Looking to avoid a two-game losing streak, they’ll need to push through any fatigue they’re currently facing and find a way to hold on to a lead late in the game this time around.
Here are three storylines that could impact the Jets’ seventh game of the season against the Oilers:

After starting slow through the first few games of the season, the Jets have corrected their earlier woes during the opening frame, as they haven’t allowed a single goal during the first period over the last three games. That being said, the club has since pushed those issues into the second period, which has placed a ton of pressure on their goaltenders.
Over the last five games, Winnipeg has allowed the second-most goals (eight) in the middle frame among all 31 teams in the league. While they’ve counteracted this by scoring six goals in the second period (tied for third-most), surrendering this much pressure in one period isn’t a sustainable margin, meaning they could begin losing a lot more games if they don’t start improving their performance in the defensive zone.

Despite picking up where he left off last season – resulting in a 2.01 goals-against average and a .935 save percentage through his first three starts in 2021 – goaltender @Connor Hellebuyck looked a little shaky during his most recent outing against the Ottawa Senators as he allowed three goals on just 21 shots. Still, the 27-year-old held his team in the game and ultimately earned the victory.
But considering Hellebuyck has historically struggled against the Oilers, as he’s generated a 3.03 goals-against average and a .902 save percentage through 13 career games against them, it’s certainly possible he could endure similar issues on Tuesday night. With that in mind, the 2019-20 Vezina Trophy winner would definitely benefit from some strong defensive support in front of him during his fifth start of the season.

Even though forward @Kyle Connor opened the regular season on Winnipeg’s second line – he’s spent the last couple of seasons on the top line – the 24-year-old put aside his personal goals and just focused on helping his team win, which he’s certainly been able to accomplish so far. In just six games this season, the left-hander has created four goals (tied for team lead), nine points, 14 shots on net, four hits, four takeaways and a trio of blocks.
While the club’s power play hasn’t found its grove as of yet, it’s still very encouraging that Connor has scored two of his four goals with the man advantage and now seems to be the primary sniper on that unit with forward Patrik Laine heading to the Columbus Blue Jackets. Since his five-game point streak came to an end on Sunday, the former first-round pick will surely be looking to force his way onto the stat sheet on Tuesday against Edmonton.

The puck will drop at 7 pm CT on Tuesday and will be available on TSN 3 along with 680 CJOB.
Uncategorized
Recent articles from Thomas Hall