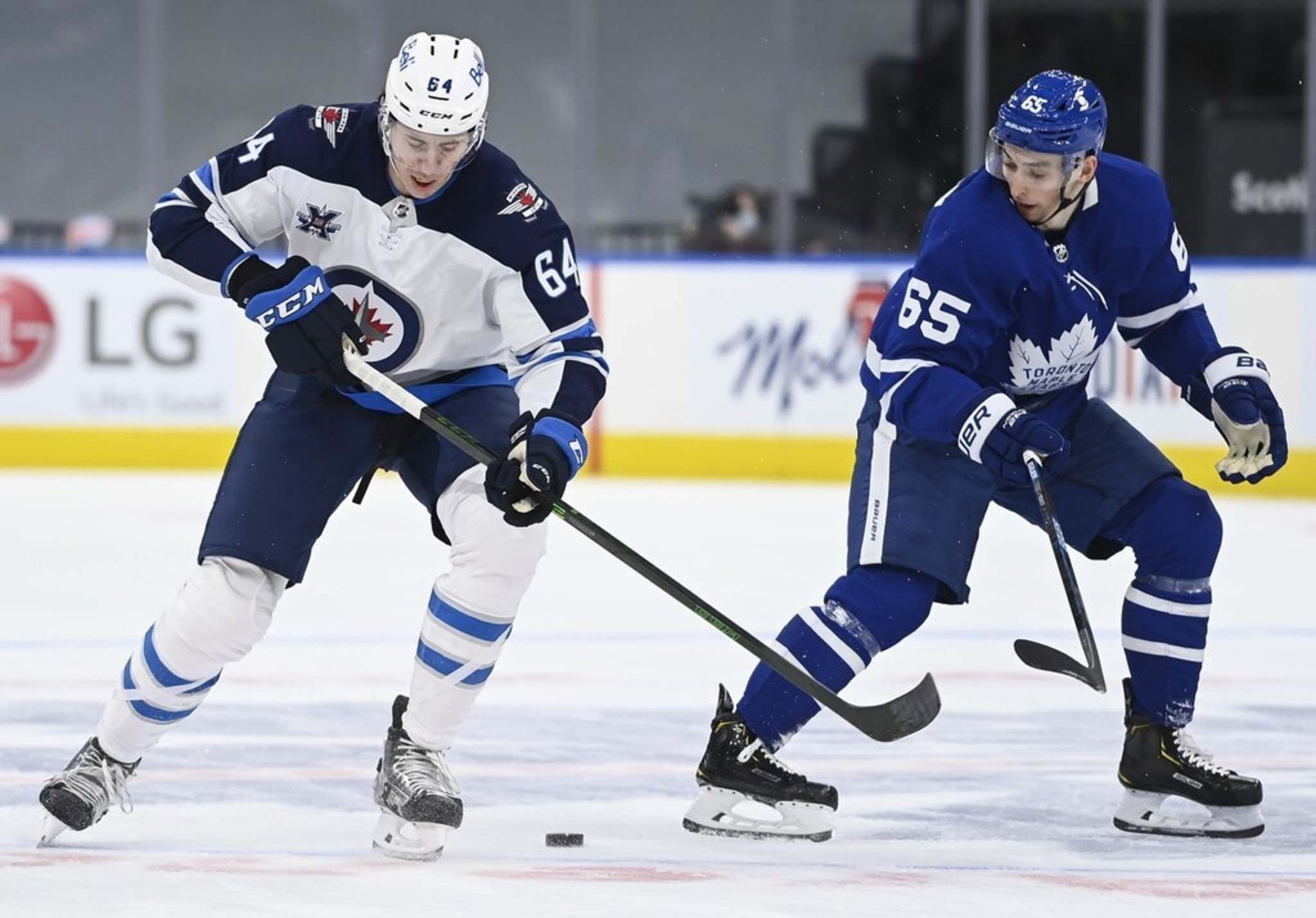 By Thomas Hall
1 year ago
Following a 3-1 defeat Wednesday, the Winnipeg Jets dropped back to three points behind the Toronto Maple Leafs in the North Division standings and they’ll be looking to close the gap during this highly-anticipated rematch Friday night at Bell MTS Place.
After falling behind 3-0 midway through last game, Winnipeg will surely be determined to control the scoreboard this time around, although accomplishing that feat against Toronto has already proven to be extremely difficult this season. Since the Maple Leafs have scored first in three of the five games played in 2021, containing their offense for an extended period of time will likely require elite defending from all 18 skaters, which is usually easier said than done.
Here are three storylines that could impact the Jets’ sixth game of the season against the Maple Leafs:

While captain @Blake Wheeler rarely misses a shift, his night ended prematurely Wednesday as he was forced to leave the game after just 5:18 minutes of ice time due to an undisclosed injury. Playing with just 11 forwards for the remainder of the contest, the 34-year-old’s presence was sorely missed and he could’ve provided a much-needed spark on offense during his team’s losing effort against the Maple Leafs.
Luckily for the Jets, Wheeler participated in the morning skate Friday and coach Paul Maurice revealed the veteran forward is considered a game-time decision, suggesting his status will likely be determined after the pre-game skate. If the former first-round pick does indeed return to the lineup, he’ll be paired alongside teammates @Paul Stastny and @Pierre-Luc Dubois once again.

With defenseman @Nathan Beaulieu undergoing season-ending shoulder surgery this week, the Jets aren’t expecting him to return to action until next season, meaning rookie @Logan Stanley isn’t leaving the lineup any time soon. Though the youngster hasn’t been perfect, the 22-year-old has been an effective injury replacement up to this point, as he’s produced one goal, two points, 40 shots on net, 28 hits, 22 blocks, 17 scoring chances, four takeaways and a 10 +/- rating through 25 games.
Despite receiving just 11:20 minutes of ice time per game from Feb. 9 to Mar. 20, Stanley has gradually gained confidence from Maurice and his staff recently, witnessing his ice time increase up to 14:06 minutes per game since Mar. 22. Based on his promising performance during that span, it seems the former first-round selection’s role could continue growing over the final month of the regular season if he continues to impress while working alongside veteran @Dylan DeMelo.

Though slowing down the Maple Leafs’ offense is never an easy task for any team, it’ll be vital for the Jets to frustrate their skaters Friday night or there’ll likely be a repeat of the awful defending that occurred in the first game of this two-game series. Thanks to poor containment in the middle of the ice, this club allowed plenty of scoring chances in front of the net, including 10 high-danger scoring chances in the first period.

Source: NaturalStatTrick.com
Based on the chart above, Winnipeg failed to force Toronto’s forwards to the outside in the defensive zone, allowing them to skate freely up to the net with the puck. In an attempt to prevent this from happening for a second straight game, it’ll be extremely important to clog up the middle of the ice in one half of the rink, causing playmakers like @Mitch Marner, @John Tavares, @Auston Matthews and @William Nylander to operate along the boards for the majority of this showdown.

The puck will drop at 7 pm CT – time to enjoy a Friday night showdown in the proper time slot – and will be available on TSN 3 along with 680 CJOB.
Uncategorized
Recent articles from Thomas Hall