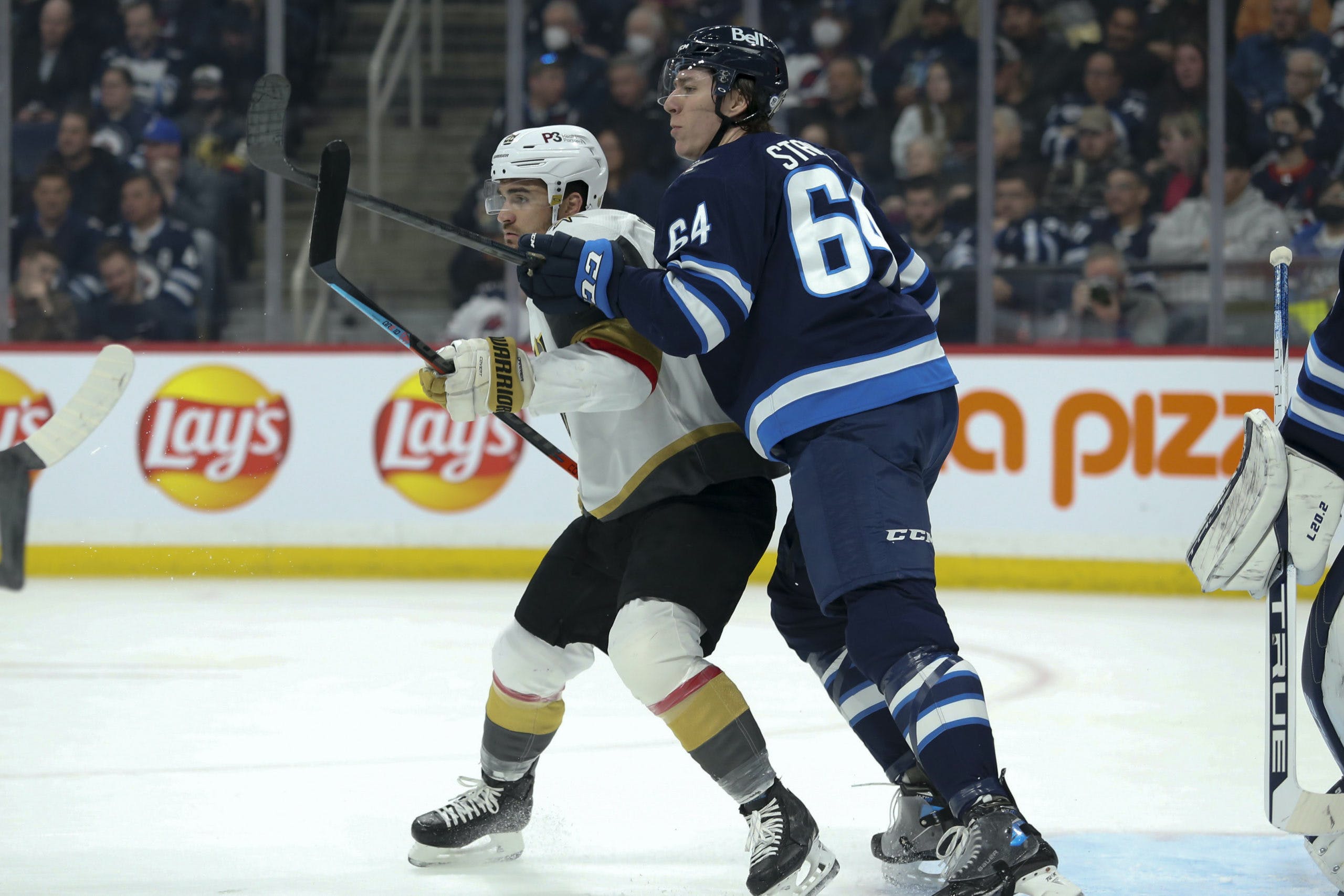 By Angus Hout
1 month ago
Welcome to Jets Nation brought to you by NHL bets site Betway! There has been a ton of injuries this season with the Winnipeg Jets. On Friday, December 9th, in the game against the Chicago Blackhawks, the Winnipeg Jets would experience two more injuries. In the first period both Saku Mäenalanen and, Logan Stanley would experience an injury and both would be added to the injured reserve on Sunday before the game against the Washington Capitals.
Mäenalanen would go into the boards hard and then leave the game holding his shoulder and would not return. Logan Stanley would also go hard into the boards but his leg would bend awkwardly. Stanley would go down to the dressing room and come back to play a shift and would leave shortly after his final shift. After the 5-2 loss to the Washington Capitals on Dec. 11 head coach Rick Bowness would tell the media both men are out for a long time at least a month.
Stanley was playing in his second game after sustaining an ankle injury and missing 18 games. Bowness would state that this injury has nothing to do with his previous injury. Stanley, 24, has one point in seven games this season. In 102 NHL games, he has 2 goals and 16 assists. The Waterloo native was drafted in the first round of the 2016 draft.
Mäenalanen,28 has played in 25 games for the Jets this season and has added four goals and two assists for the Jets. The Kemi, Finnish-born player is playing in his first full NHL season and was an important piece for the bottom six.

Mason Appleton is still about 4-8 weeks away from returning from injury. Appleton would undergo wrist surgery after an upper-body injury sustained on Nov.13 against the Seattle Kraken. Appleton and Kraken defenceman Carson Soucy were tangled up along the boards and Appleton’s stick would get caught in the glass and close-lined himself hard.
Appleton, 26, has played 14 games with the Jets this season and has one goal and five assists. The Jets forward was drafted in the sixth round by the Jets in 2015. Appleton was picked up by Seattle in the 2021 expansion draft and traded back to the Jets at the trade deadline in 2022.  The Green Bay, native has played in 220 NHL games and has scored 29 goals and 41 assists.
I think every week since Nikolaj Ehlers I’ve been asked about his return. Ehlers has only played the first two games this season for the Jets, the last game he played was back on October 17. Ehlers underwent a sports hernia surgery on November 23 and was expected to return to the team 6-8 weeks after the surgery. That 6-8 week window would have Ehlers returning anywhere between January 4th and the 18th.
Ehlers,26 has been with the Jets since he was drafted in the first round by the Jets in 2014. In 480 games Ehlers has scored 164 goals and has a total of 361 points. The Jets have missed Ehlers but with the next-man-up mentality, the Jets have not suffered without one of their top six forwards.
Jets News
Recent articles from Angus Hout