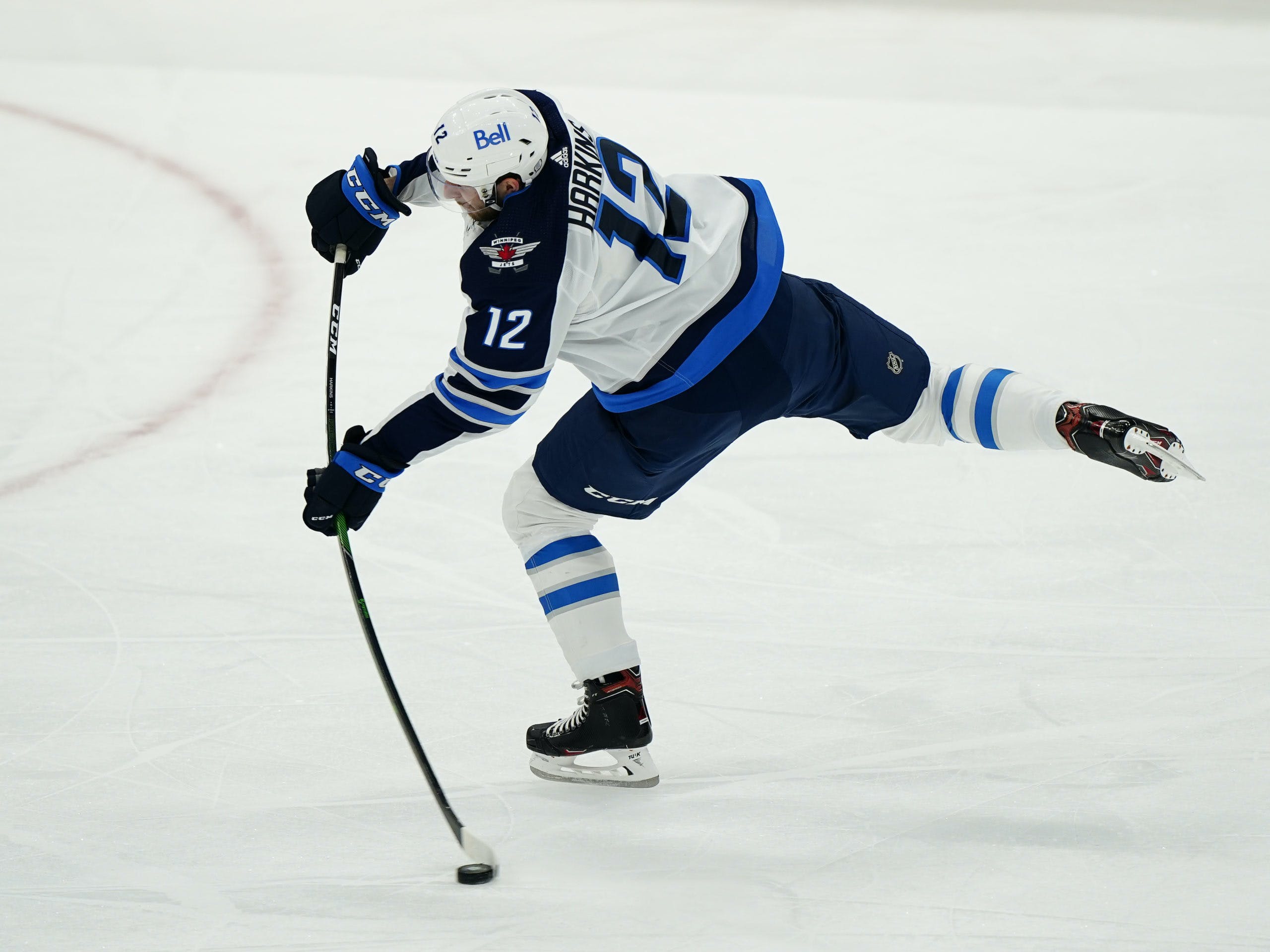 By Thomas Hall
1 year ago
It’s that time once again, hockey has returned following one of the wildest off-seasons in National Hockey League history, as pro mini camps – or rookie camps as they’re also known as – opened across the league on Thursday.
For the Winnipeg Jets, this commences the start of what’s expected to be an extremely crucial 2021-22 season, especially since this team was swept out of the second round of last season’s Stanley Cup Playoffs. While preseason games won’t begin until next week, that means there’s still plenty of time to focus on the interesting storylines that’ll be featured throughout this year’s training camp.
With that in mind, here are some topics fans should keep an eye on over the next few weeks:

Since the Seattle Kraken selected forward @Mason Appleton during the expansion draft over the off-season, the Jets are now tasked with locating his replacement, who’ll skate alongside teammates @Adam Lowry and @Andrew Copp on the third line.
But with limited cap space available, the front office wasn’t able to directly address this concern through free agency or a trade, aside from signing veteran @Riley Nash, meaning this competition is slated to occur internally. Along with Nash, forwards like @Jansen Harkins, @Kristian Vesalainen, @Dominic Toninato and @David Gustafsson are all expected to battle for this role.
Considering Nash is the lone right-hander among this group, odds are he’s likely viewed as the favorite for this third-line gig, however, the 32-year-old has experienced two significant injuries since 2019-20. So he hasn’t exactly been reliable when it comes to staying healthy.
If the former Columbus Blue Jacket falls out of this competition, then that’d probably open the door for Harkins and Vesalainen to prove they deserve to assume a much larger role this season – making this roster battle the most intriguing one to watch throughout training camp.

Following the departure of goaltender @Laurent Brossoit, who signed with the Las Vegas Golden Knights in the off-season, the Jets are set to feature a different backup behind starter @Connor Hellebuyck for the first time since 2017-18.
While management still has time to add another netminder to the roster, as of now, it doesn’t appear they’re planning to do so. In turn, that leaves @Eric Comrie and @Mikhail Berdin as the only two viable candidates to compete for the backup gig, which is obviously less than ideal.
Though Comrie possesses some NHL experience, the 26-year-old has posted a concerning 4.08 goals-against average and a .873 save percentage through nine career contests. Not to mention, he’s also only participated in four NHL games over the last two seasons, meaning his performance at the highest level of competition is unpredictable at best.
As for Berdin, the 23-year-old is easily the most highly-regarded goaltending prospect within the Jets’ minor league system, although he’s yet to make his NHL debut and didn’t blow anyone away with his showing in the AHL last season. Over his 30 games played, the former sixth-round pick registered a 2.89 goals-against average, a .897 save percentage along with a 13-11-5 record.
So despite featuring one of the top goaltenders in the league, in Hellebuyck, Winnipeg’s depth behind the 2019-20 Vezina Trophy winner is far from certain.

Safe to say, the 2020-21 season was a year to forget for forward @Pierre-Luc Dubois. The 23-year-old went from being benched in Columbus, to being traded to Winnipeg, to being forced to quarantine for 14 days in a hotel room, to meeting new teammates during a COVID-19 shortened season, to enduring the worst statistical performances of his entire career. That’s one wild year.
Now that Dubois has received a chance to reset from last season, he’ll be able to start fresh this season and look to perform up to his high expectations, something he failed to accomplish during the 56-game schedule and in the playoffs as well.
Similar to the 2020-21 campaign, the former first-round selection is expected to be positioned alongside teammates @Nikolaj Ehlers and @Paul Stastny on the Jets’ second line in 2021-22. Even though this trio didn’t excel together, they did show flashes of potential at times, and reuniting them will hopefully result in increased chemistry over a full season.
Considering Dubois is slated to become a restricted free agent next summer, and is only two seasons away from unrestricted free agency, there’s no question it’ll be extremely important for him to return to his previous game-changing form.

On most nights, Winnipeg’s fourth line consisted of @Mathieu Perreault, @Nate Thompson and @Trevor Lewis last season. Well, all three of those forwards have since moved on, leaving this team with a wide-open competition for those three spots on the bottom forward line.
Having said that, the number of skaters competing for those roles can likely be narrowed down pretty easily, as Nash, Harkins, Vesalainen, Toninato and Gustafsson can all be slotted in as potential candidates for the fourth line. But since this same group is also battling for the final spot on the third line, whoever wins the job next to Lowry and Copp, will be exempt from the fourth-line competition, leaving four skaters to battle for just three spots.

Heading into the off-season, the biggest concern Winnipeg needed to address was its lack of top-four talent on defense. Following the acquisitions of @Nate Schmidt and @Brenden Dillon, paired with the returns of @Josh Morrissey and @Neal Pionk, this team has done exactly that ahead of the 2021-22 campaign.
While acquiring Schmidt and Dillon are great moves for the Jets, those deals have created somewhat of a logjam on their backend, particularly involving their top young defensemen. With the blueline now solidified, there isn’t a clear route for prospects @Ville Heinola or @Dylan Samberg to make the team out of training camp.
Even though featuring too many talented blueliners is always a good problem to have, with Heinola in particular, sending him back to the Manitoba Moose for a third straight season probably won’t advance his development nearly as much as it would if he were in the NHL. But barring an injury to one of the regulars, that’s exactly where he and Samberg are destined to spend the majority of this season.

Winnipeg featured the seventh-highest conversion rate on the power play in 2020-21, according to NHL.com, although it seems they could benefit from slightly tweaking their units ahead of this season.
Considering Ehlers finished tied for the second-most power-play goals (six) and the third-most power-play points (13) among all Jets forwards last season, it’d probably be wise to promote him to the club’s top group. As a result, this would allow the 25-year-old to operate across the ice from @Kyle Connor, providing this unit with a pair of lethal scoring threats.
Assuming Stastny would be bumped down to the second power-play unit, @Mark Scheifele would be able to take his place in front of the net, where he could create plenty of havoc for opposing goaltenders.

It may seem like ages ago by now, but prospect @Cole Perfetti has only been part of Winnipeg’s organization for just over a year and is set to enter his second professional season in 2021-22.
Despite receiving an invite to the Jets’ training camp, Perfetti will almost certainly begin this season with the Moose, where he produced nine goals and 26 points through 32 games in 2020-21. But if the 19-year-old impresses once again, even with coach Paul Maurice in charge, it’s possible fans could witness the former first-round selection make his NHL debut at some point this season.
Uncategorized
Recent articles from Thomas Hall