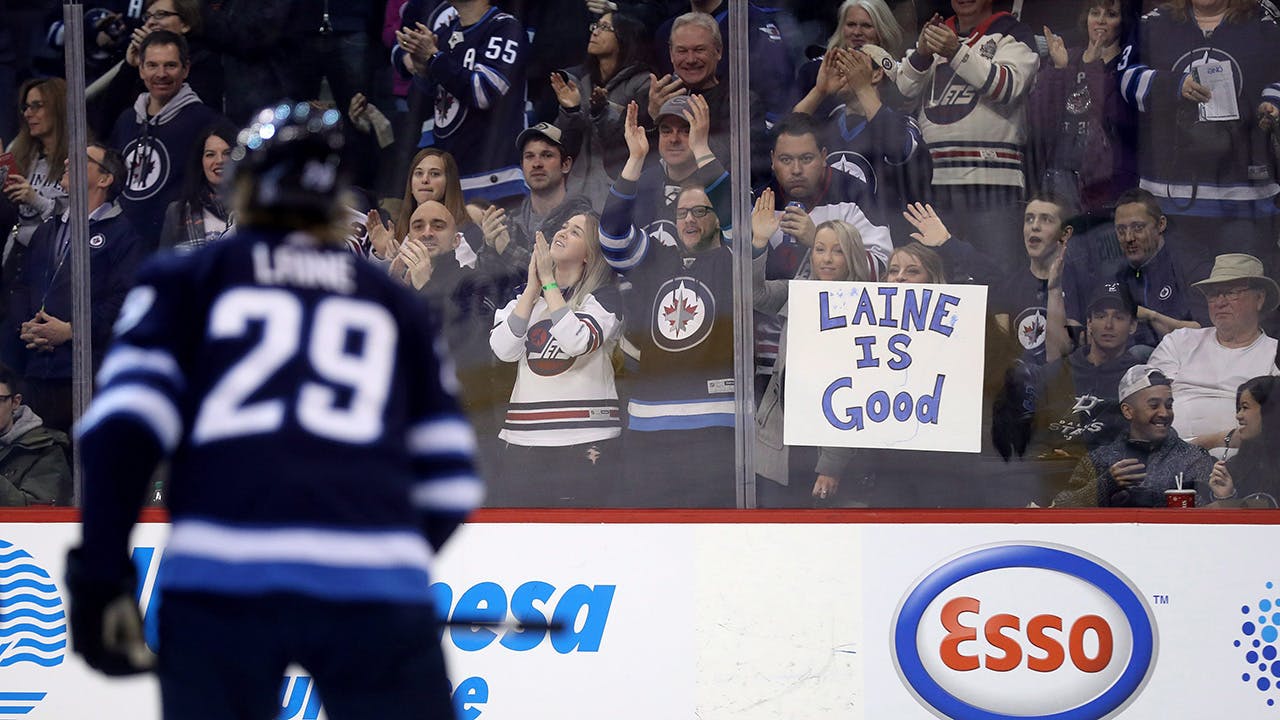 By Angus Hout
1 year ago
This week, Elliotte Friedman floated out the idea of the Florida Panthers having some interest in former Winnipeg Jet and current Columbus Blue Jacket, @Patrik Laine. Friedman says he sees the Panthers being “aggressive in their pursuit of improvement.” But why aren’t the Jets looking to bring back the 23-year-old Finn? The Jets lacked scoring in the second round and could have used Laine to score to bully some of the Montreal Canadiens.
Laine had tons of pressure from the fanbase here in Winnipeg. You could tell it was starting to weigh on him after the 2017-18 season, where he scored 44 goals in 82 games. In the 2018-19 season, he took a bit of a step back and still scored 30 goals in 82 games. How many NHLers can maintain a 0.53 goals per game pace? Not many. Laine is a 40 goal scorer and when he’s at his best he can average 30 goals during his most seasons.
Laine only scored 12 goals in 46 games this season. I’m going to put that on former Blue Jackets head coach, John Tortorella. Laine didn’t thrive under that sort of pressure from his head coach. I believe that with Laine’s time away from the Jets, he could come to appreciate the locker culture in Winnipeg and maybe feel more comfortable in that environment.

How Can Winnipeg Acquire Laine’s Rights?

It wouldn’t be easy to acquire Laine’s rights from the Blue Jackets, but there could be a deal to be made for the former first-round selection. In order to accomplish that feat, the Jets would probably need to surrender a first-round pick in next month’s NHL Draft, a 2022 third-round pick and prospect @David Gustafsson.

What Could Laine Receive Through Restricted Free Agency?

With Laine’s lackluster performance this past season, it might make sense to offer him a short-term deal, potentially a two or three-year contract. Considering he earned $6.75 million in 2020-21, according to PuckPedia.com, management probably shouldn’t pay him more than $8 million per season, although the young winger could receive that amount or higher if he heads to arbitration.
I know the Jets are way more desperate to bring in a high-quality defenseman this summer, but if they can’t sign @Dougie Hamilton or @Tyson Barrie, why not go all-in on goal scorers?
Let me know if you’d want Laine back in Winnipeg? If so, where should he be positioned in the lineup? And how  much would you pay him? You can let me know in the comments below or hit me up on Instagram or Twitter – @angushout.
Ps. Patrik if you did read this, please consider coming back to Winnipeg I miss you.
Uncategorized
Recent articles from Angus Hout