NHL All-Star John Scott is wrong about the Winnipeg Jets 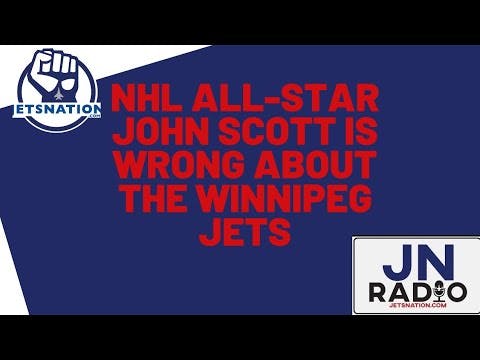 By Angus Hout
1 month ago
Welcome to Jets Nation brought to you by NHL bets site Betway!Another Sunday another episode of Jets Nation Radio Angus Hout and Sam Brownell host Jets Nation Radio episode 24. Angus has a brand new back-ground he looks like he’s recording in space. Angus opens up the episode with a John Scott quote from last Friday’s episode of Dropping the Gloves. The quote is “This is a great start to the season for the Jets, but I’m not quite buying them as a legit threat in the west yet.” Angus and Sam talk about the Winnipeg Jets and if they are a good team or not. The Jets are a good team the guys agree on that.
Talks about Dylan Samberg and his beautiful first goal in the NHL and how good he looks on the back end even with young mistakes. Will Mikey Eyssimont stay with the Jets when they are all healthy? Sam doesn’t think so for a moment. Angus talks about the Jets’ losses and the similarities between all of them, which leads us down the road of the awful Power Play. Laine vs. Dubois comes up as the Blue Jackets were in town on Friday.

Which of the two would you want on the with the Jets? Do the Winnipeg Jets have the most pests on their team? This leads us to who has been the best Jet in the bottom six. It turns out there are lots of talented bottom sixers.
Has David Rittich become the whipping boy for the Winnipeg Jets? Angus thinks so, Sam defends the Jets’ backup goaltender. Angus asks about Sam Gagner and if he is still going to be Jet after the trade deadline. Sam gives about five reasons why the Jets should not trade.
The boys look at the week ahead for the Jets of course everyone thinks the Jets. Sam asks who starts in the net in the Chicago Blackhawks and St. Blues back-to-back games.
Make sure to like and subscribe to Jets Nation Radio wherever you listen. Leave some comments and we will answer them on the next episode.
Shows
Recent articles from Angus Hout