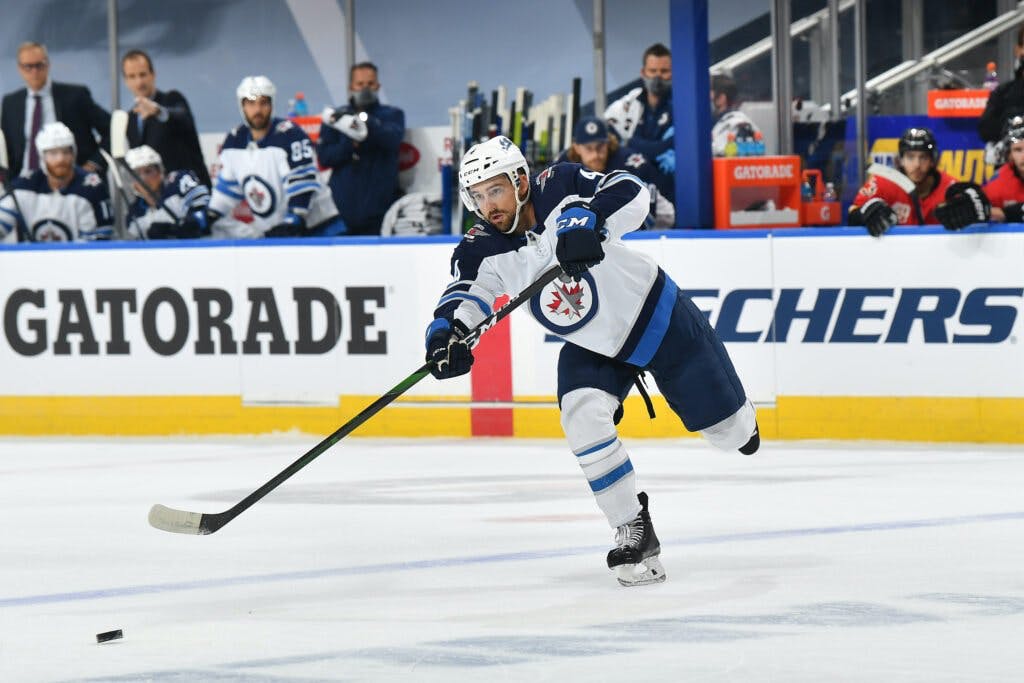 By Angus Hout
1 year ago
When it comes to defensemen on the Jets, most people think of Josh Morrissey as being the No. 1 on the Jets; which is fair to say but there’s someone who has really piqued my interest this season. It’s Neal Pionk, he’s been flying under the radar since he got going last season, and watching highlights and watching him more closely this year I think he’s one of the most underrated players in the league.

OTTAWA, ON – FEBRUARY 20: Neal Pionk #4 (Photo by Andre Ringuette/NHLI via Getty Images)
Last night, he potted his first goal of the season and has five points in his last five games as a defenseman. I’m sure someone will point out that those five games have been against Ottawa and Calgary. I know Ottawa is almost historically bad and Calgary is having a rough start to the season, but we need to appreciate the fact that Pionk is getting points.
I love Pionk’s work ethic, there are very few games where I see him half-assing it. He sneaks up into the play offensively and from time to time it hinders the team. But when does get caught in a bad position, he skates his heart out to get back and play his defensive role. The man is not afraid to shoot, which sets him apart from most defensemen. He averages 2.3 shots per game, which is a lot all things considered. He might be scoring at 3.5% but who knows what can happen when you get a shot on net. Even if those shots are from the perimeter, I think they have the chance to do something for the Jets, that’s why he has 48 assists in 84 games with the Jets.
His defensive game could be a little tighter, but if you watch how he moves the puck out of the defensive zone it’s amazing. It feels like 9/10 he can find a forward and keep the puck out of the zone. He has such a sharp hockey sense and it’s almost unnoticed amongst other teams. Honestly, I think they need to give him the nickname “The Cougar” because you don’t notice him until it’s too late.
The fact that he has gotten better every season since he joined the league is amazing. In his first full season with the Rangers, he only had 26 points and was a -16 last year in 73 games. Last season, he had 45 points and was a +10. If my math is right, if he continues his same point totals this season, he could have 43 points in a 56-game season. Is that realistic? Probably not, but if he hits 37 points by the end of this season, he would continue that upward trend. Let’s show our love for No. 4 because he sure does need it and there isn’t enough love for him yet.
Let me know what you think, am I overrating him or maybe not loving him enough.
Uncategorized
Recent articles from Angus Hout