Life is great as a Winnipeg Jets and Bombers fan 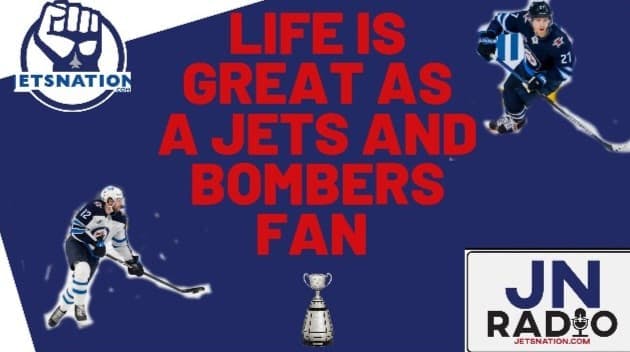 By Angus Hout
22 days ago
Welcome to Jets Nation brought to you by NHL odds site Betway! We start this episode by discussing the game between the Winnipeg Jets and the Calgary Flames. and what went wrong for the Jets in that game. Angus asks which player was the best pick-up during the off-season. This leads to who comes out of the line-up when Nikolaj Ehlers is healthy and back in action.  Sam busts out the old NHL rule book to see what happens with players who have a one-way contract and how can they go back to the AHL without being claimed on the waiver wire.
The guys start talking about which Jets contracts are expiring and when Kevin Cheveldayoff should start making some signings. Angus brings up the fact the Jets were on top of the world to start the season last season and warns everyone about the fact this team could still collapse but still stays positive about this team. Are we at the point where we should worry about Kyle Connor and his lack of scoring? Sam gives us a good reason why Connor is not scoring regularly, this leads to talking about the Jets’ power play and why it has been so bad for the Jets early in the season.