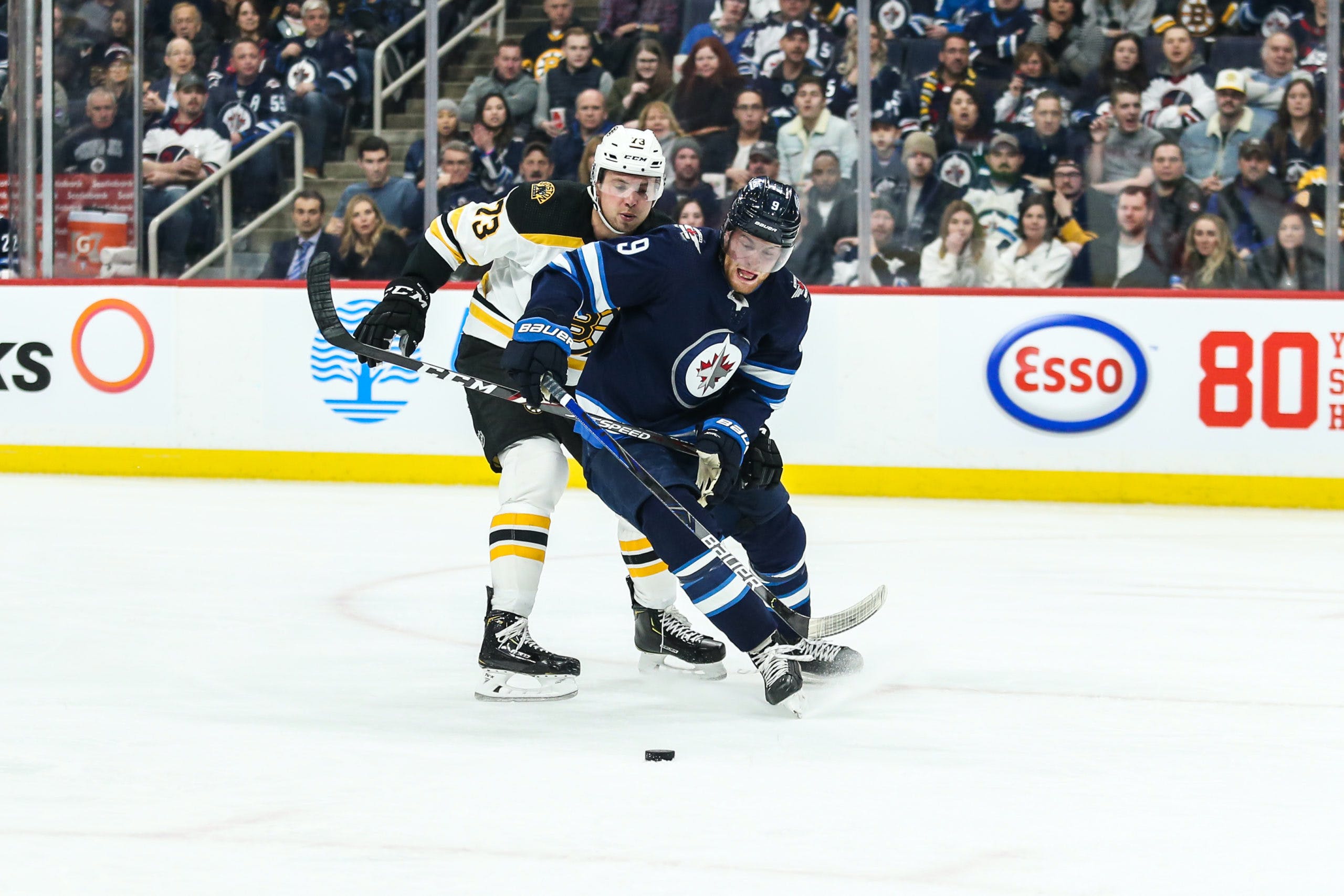 By Thomas Hall
8 months ago
Coming off a two-day break, the Winnipeg Jets are set to welcome back forward @Andrew Copp, who’ll look to help lead his team past the Boston Bruins on Friday.
Thanks to their massive 7-3 victory over the Vegas Golden Knights, this franchise currently finds itself on the cusp of a playoff spot, placing them just four points shy of the second wild-card seed in the West. With only 21 games remaining – including Friday’s contest – there’s zero room for error if they hope to qualify for the post-season.
While Boston has already essentially secured its spot in the playoffs, as the East is pretty much wrapped up at this point, there’s still seeding to be decided. As one of the two current wild-card holders, they’d likely prefer to surge into one of the three Atlantic Division spots, making this showdown a meaningful contest for them, as well.
Taking all these factors into account, this Friday night tilt is shaping up to be another highly-anticipated matchup for the Jets – good thing it’s taking place at Canada Life Centre.
Diving into this showdown, here are three storylines ahead of this final meeting of the season between Winnipeg and Boston:

Andrew Copp Returns After Sitting Out Tuesday For Precautionary Reasons

Unfortunately, avoiding head injuries is an area where Copp has struggled this season, limiting him to 54 games thus far. Thankfully, the 27-year-old didn’t suffer any significant damage during his most recent incident against the St. Louis Blues, which will allow him to return to the line-up Friday.
Following his one-game absence, the 6’1″ forward is set to be reunited next to teammates @Adam Lowry and @Evgeny Svechnikov on Winnipeg’s third line. Additionally, he’ll also be returned to his roles on the power play and penalty kill, too.
With only two more games until the 2022 Trade Deadline arrives, there isn’t much time remaining for Copp to increase his trade value any further, however, based on recent reports, that might not be necessary. At the moment, several potential suitors appear interested in services, most notably the Boston Bruins and Colorado Avalanche.
Choosing to take this situation day by day, the left-hander isn’t focused on where he might end up and has his sights set on helping his current franchise, the Jets. As for the rest of this forward group, here are the projected lines for Friday’s clash against the Bruins:
@Paul Stastny – @Mark Scheifele – @Blake Wheeler
@Kyle Connor – @Pierre-Luc Dubois – @Nikolaj Ehlers
Copp – Lowry – Svechnikov
@Jansen Harkins – @Dominic Toninato – @Kristian Vesalainen

After what was a very quiet offensive first half, Lowry has turned his 2021-22 performance around in the second half, which has seen him making an impact at both ends of the ice.
Through his first 42 games, the 28-year-old posted just three goals and eight points, with only two of them occurring on special teams. But over his previous 19 contests, he’s proven far more effective on the score sheet, registering six goals and eight points – including four short-handed points (three goals, one assist).
Obviously, Lowry is better known for his defensive upside than his offence, and rightly so. That being said, he’s been capable of sprinkling in some scoring here and there throughout his career, resulting in five 20-point seasons across his eight professional campaigns.
Considering Copp will once again be at his side, it wouldn’t be surprising for the veteran centre’s scoring surge to continue against Boston, especially on the penalty kill.

In just his second NHL season, defenceman @Logan Stanley has certainly endured his fair share of highs and lows, but against the Golden Knights on Tuesday, it was surely a memorable night.
Recording his first career Gordie Howe hat-trick, the 23-year-old acted as a spark plug for his teammates in the first period and then once his five-minute penalty concluded, he went on to make an impact on the scoreboard. Thanks to his first goal of 2021-22 and a secondary assist, he enjoyed his second career multi-point performance – both of which have occurred this season.
Matching up against Boston’s skaters, perhaps Stanley can utilize his massive 6-foot-7, 231-pound frame to battle for position in front of Winnipeg’s net, clearing goaltender @Connor Hellebuyck’s vision. While that’s a trait this club has struggled mightily with so far, now’s as good a time as ever to execute that game plan.
More from Jets Nation:
Uncategorized
Recent articles from Thomas Hall