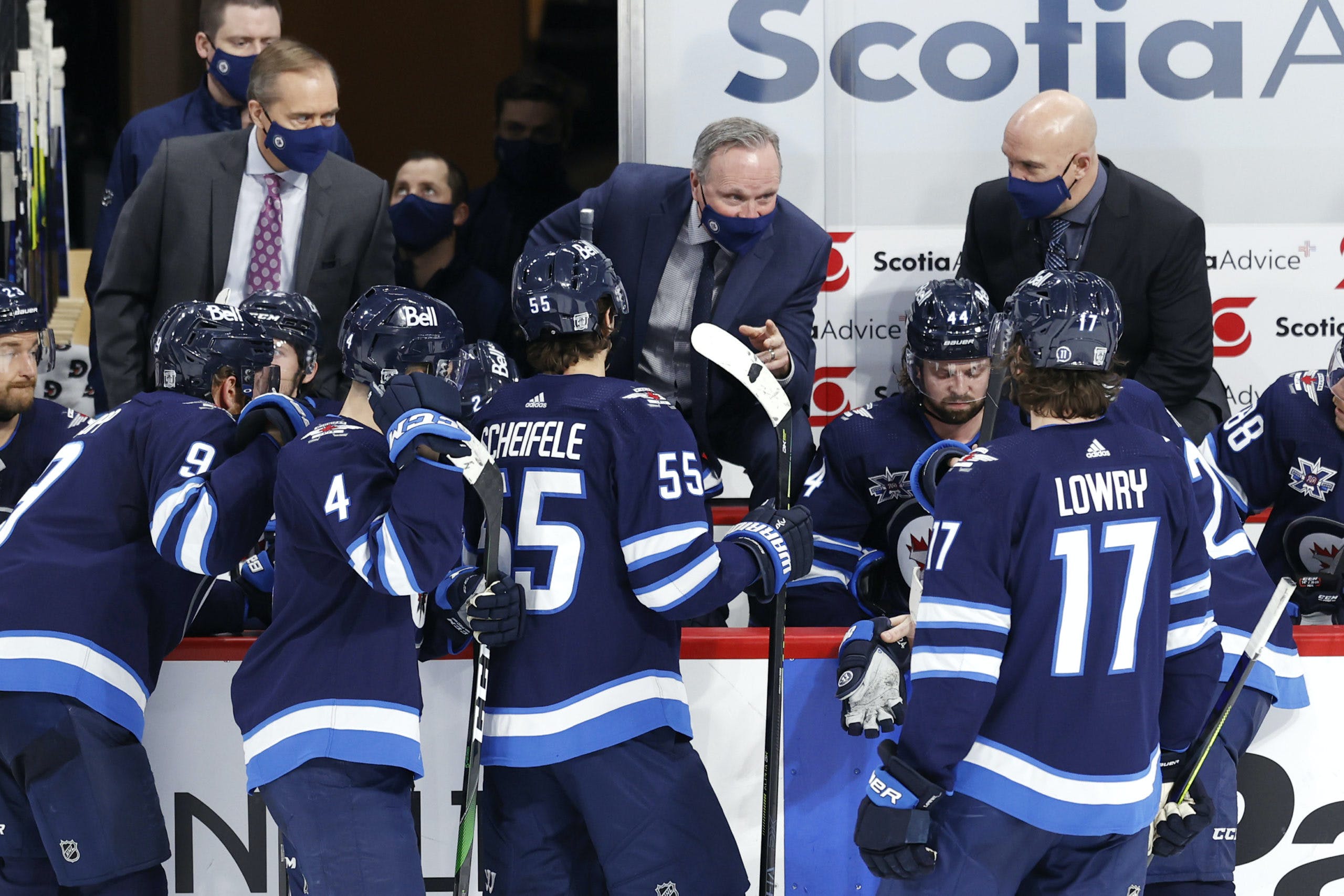 By Thomas Hall
11 months ago
The Paul Maurice era in Winnipeg has drawn to a close.
Making the official announcement Friday morning, Maurice officially resigned as head coach of the Jets, ending his tenure, which ran eight-plus seasons, with the organization. Stepping up as his replacement, assistant coach Dave Lowry is assuming the head coaching duties for the remainder of the season.
Considering the Jets fell 4-2 to the Buffalo Sabres earlier this week, there’s no question everyone surrounding this franchise could benefit from a boost – and that’s exactly what Lowry is hoping to bring – while they ascend on the final stretch of games before the Christmas break commences.
Before everyone departs to spend a few days with their families, there are still four matchups left on the upcoming schedule, beginning with a showdown against the Capitals. Even though these two organizations haven’t faced each other in nearly two years, this meeting should prove to be fairly entertaining, especially since Washington sits second in the Metropolitan Division with a 17-5-1 record.
Of course, the first person that immediately comes to mind regarding this franchise is captain @Alex Ovechkin, who enters this matchup 143 goals shy of hockey legend Wayne Gretzky’s all-time goal record (894). Let’s hope No. 8 isn’t able to trim that deficit any further until he leaves town.
Digging deeper into this showdown, here are three storylines ahead of the first of two meetings between the Jets and Capitals this season:

With Maurice resigning, that has cleared the path for Lowry to officially make his debut as a head coach in the National Hockey League, with his first test coming against the Capitals.
Though the 56-year-old doesn’t possess any prior head coaching experience at the NHL level, however, he’s worked behind the bench in Winnipeg since 2020-21 and also features previous experience as a head coach in the Western Hockey League. In total, he served as the head bench boss for the Brandon Wheat Kings (2019-20), Victoria Royals (2012-2017) and Calgary Hitmen (2008-09).
Additionally, the former NHL player, who played 19 seasons in the league, has also previously spent time as an assistant coach with the Calgary Flames (2009-2012) and Los Angeles Kings (2017-2019).
Let’s see if a change behind the bench can help spark this Jets squad that’s lost two straight games.

In what’s gotten lost in all of this coaching chaos, prospect @David Gustafsson is set to make his season debut for the Jets on Friday, after being called up from the Manitoba Moose just one day ago.
Assuming Winnipeg’s line combinations aren’t significantly altered from Thursday’s practice, which remains to be seen, Gustafsson is expected to centre the club’s fourth line alongside teammates @Jansen Harkins and @Kristian Vesalainen. For now, the 21-year-old likely won’t appear on the penalty kill, however, he could do so in future contests.
Despite being limited to the American Hockey League in 2021-22, the former second-round selection didn’t allow that assignment to prevent him from performing effectively, as he posted a team-high seven goals and 16 points through 23 games with the Moose.
Though Gustafsson’s offensive capabilities have received plenty of attention this season, the top prospect is widely known for his impressive defensive skills, especially on the penalty kill, those of which could be key to keeping himself up with the big club long term.

Striking First Through the Opening 20 Minutes

Historically, whenever a new head coach is hired their team usually experiences a much-needed boost out of the gate and this time around, Winnipeg is hoping it can enjoy a similar result beginning with this matchup against Washington.
While the Jets have surrendered the opening goal in three of their previous four games, with Lowry now in charge, they’ll hopefully be able to turn things around during this Friday night showdown. Ideally, this club will break their troubling trend and crack the scoreboard first, although that could prove challenging while facing this opponent.
On the season, the Capitals have scored first in 20 of their 29 games, resulting in 28 goals within the first 20 minutes – tied for fourth-most in the league. Making this obstacle even more difficult, they’ve also allowed the fifth-fewest number of scores (17) in the opening frame, and only three of their 18 goals against in December have occurred in the first period.
Safe to say, whichever team records the game’s opening goal could potentially decide the outcome of this contest.

LOOKING FOR TICKETS? CHECK OUT FANSFIRST!