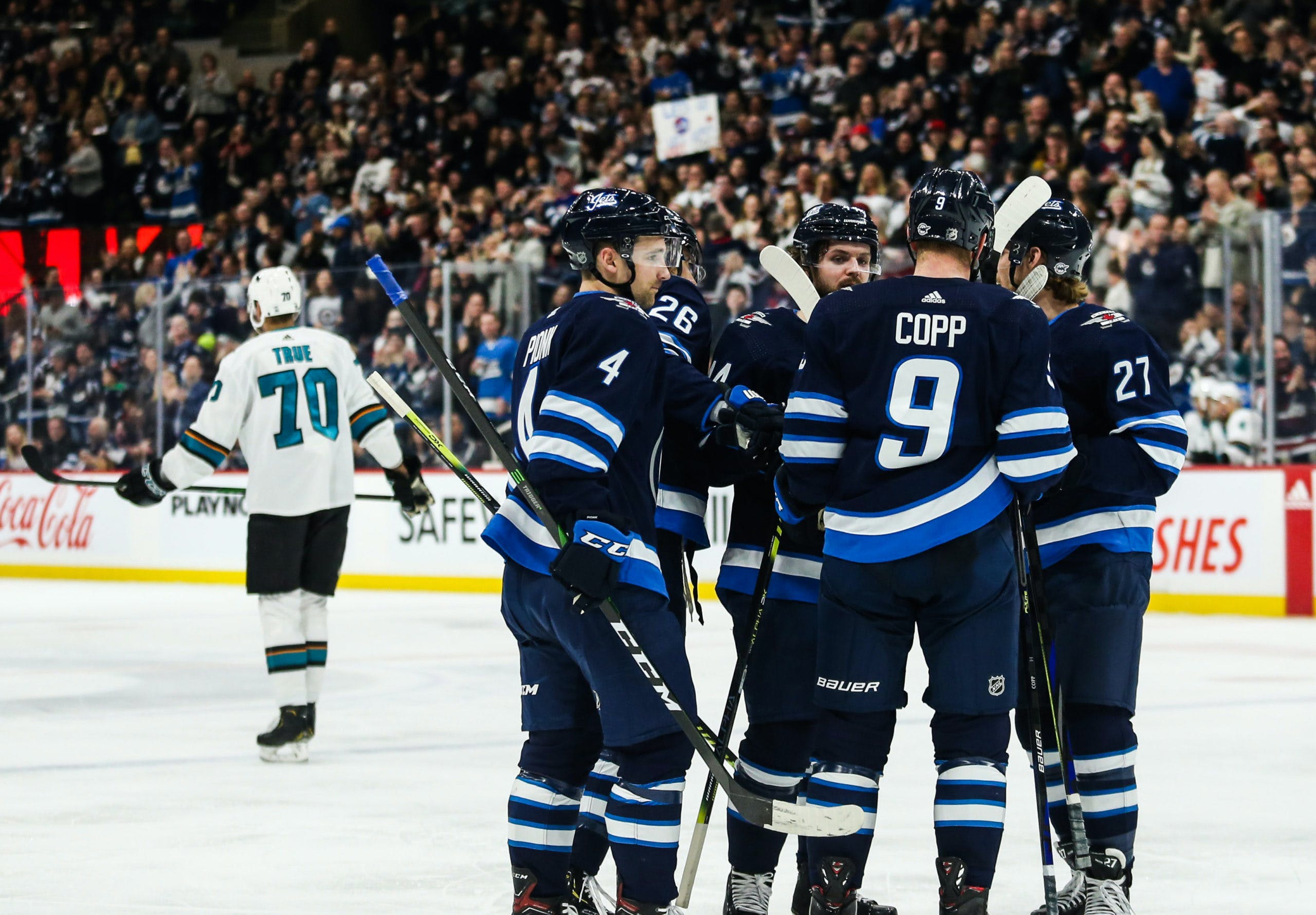 By Angus Hout
1 year ago
The Winnipeg Jets played their hearts out on Tuesday and unfortunately, were bested by St. Louis Blues goaltender @Jordan Binnington. I also endured another rough night in betting, only going 1-for-6 on Tuesday, which leaves my season record at 2-10 – I’m starting the year very sloppy.
But just as the Jets started slow, I’m too hoping to turn it around during this latest series of betting action. For those unaware, Thursday’s game will be the final one between the San Jose Sharks and the Jets in 2021-22. So let’s dive in.

The Jets are coming off a shootout loss, where they dominated in almost every category, and still couldn’t find a way to break through in regulation. Binnington was feeling it on Tuesday night, stopping 39 out of 41 shots against.
Starting in net for Winnipeg will be @Connor Hellebuyck, thanks to Dailyfaceoff.com for that. It looks like coach Paul Maurice liked his lines from two nights ago and will be running out those same line combinations. Injury-wise, @Paul Stastny remains out of the line-up with a foot injury.
The Jets have struggled mightily against the Sharks over the last few seasons. The Jets have only won one home game over the last seven meetings against this opponent, which could lead to some decent odds if you’re betting on the home team.

What You Need to Know About the Sharks

The Sharks are starting with a much better record than everyone expected, opening with a 7-4-1 record. They won their last game against the Calgary Flames 4-1. Currently, the Sharks are fourth in the Pacific Division and are just two points behind the Anaheim Ducks for third place.
The Sharks will be starting goaltender @James Reimer. Additionally, they’ll be without @Timo Meier, @Erik Karlsson, @Kevin Labanc, @Marc-Edouard Vlasic, @Matthew Nieto, @Jacob Middleton, and @Radim Simek due to Canadian border restrictions. Coach Bob Boughner will also sit out.
If the Jets were hoping for an easier night on the power play, they’re out of luck as the Sharks are second in the NHL on the penalty kill, succeeding 90.3 percent of the time. Fortunately, San Jose’s power play currently sits in the middle of the pack, placing 13th overall and buzzing at just 21.1 percent.

I’m making all of my bets at PointsBet.com and so should you if you’re choosing to gamble.
MoneyLine:  The Sharks are viewed as the underdogs, with their recent success over the Jets along with a strong start to the season, I’m betting on the away team at +160.
Easy Money: @Kyle Connor is currently a top-five scorer in the NHL, consider taking him at +125.
Prop Bet: Since I’m taking the Sharks to win, I’m also taking them as the prop bet to win and as the total under of 4.5, labelled at +550.
Can’t Miss Parlay: Edmonton Oilers Money Line, Calgary Flames ML and Florida Panthers ML at +579.
Risky Business: @Adam Lowry to score at +1800.
Period Bet: Three goals scored in the third is rated at +400, and I’m taking that all day long.
Happy gambling and good luck!
Uncategorized
Recent articles from Angus Hout