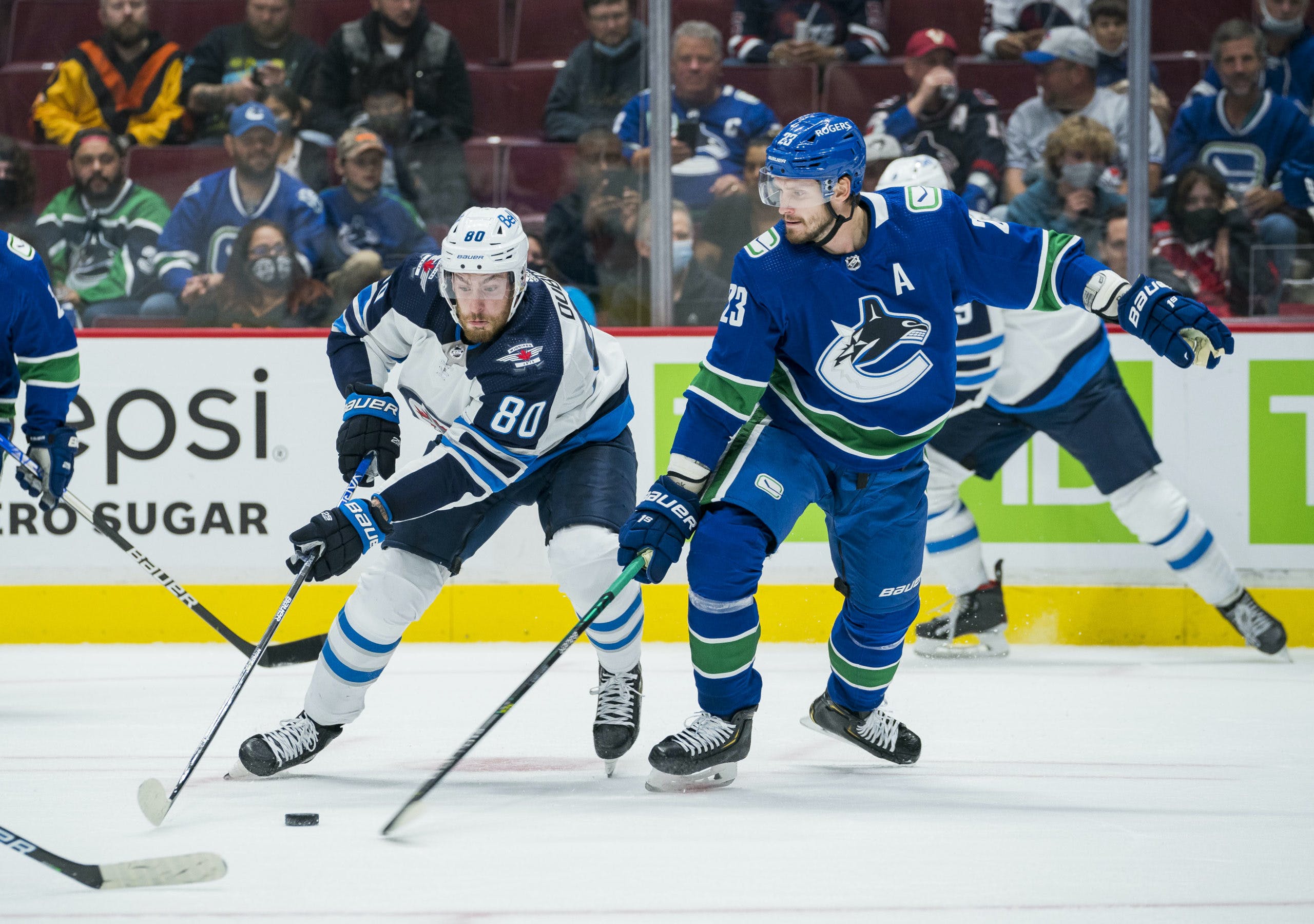 By Angus Hout
1 year ago
On Thursday night, the Winnipeg Jets were handed a shootout loss against the Edmonton Oilers. That game was full of excitement and uneatable heartbreak. The Jets were unable to capitalize on a four-minute power play with captain @Connor McDavid in the box.
A heartbreaking loss for sure.
Looking at the betting landscape, I went 1-for-6 Thursday, which takes my record to 8-for-42 on the season. Let’s see if my luck changes Friday night.

The Jets and Vancouver Canucks haven’t played each other in the regular season since May 2021. In that game, the Jets snapped a two-game losing streak with a 5-0 victory over the Canucks. In the last five games at Rogers Arena, Winnipeg is 5-0. How long can the Jets keep beating the Canucks? We’ll see.
Dailyfaceoff.com has @Eric Comrie starting tonight, making his fifth start in 2021-22. He owns a record of 3-1-0, a save percentage of .926 and a goals against average of 1.98. In four games, Comrie has faced an average of 27 shots per game. The Jets will be without @Paul Stastny once again.
The Jets are right in the middle of the NHL, sitting tied for 16th in shots for (31.6), averaging 31.6. Defensively, this team is currently allowing 31.3 shots against per game, ranked 18th in the league.
No shock, but @Kyle Connor leads the Jets in goals (12) and points (21).

The Canucks are going through a rough patch thus far, dropping their last five games while also being outscored 12- 24. Vancouver is sitting seventh in the Pacific Division with a record of 5-10-2.
The Canucks will be starting @Thatcher Demko between the pipes. Demko currently has a save percentage of .898, goals against average of 3.31 and a record of 5-7-1. They’ll be without @Brandon Sutter, @Luke Schenn and @Matthew Highmore
Statistically, Vancouver is 11th in shots for, averaging 32.6 per game. On the other hand, they’re positioned 15th in shots against, allowing 31.7 per game.
Leading the Canucks in points is @JT Miller with 18, and he also leads them in goals (eight).

I’m betting with PointsBet.com and so should you!
Money Line: I’m taking the Jets at -105.
Easy Money: @Pierre-Luc Dubois to score over 0.5 points at -120.
Risky Business: Miller and @Nikolaj Ehlers both score first for their teams at +4000.
Prop Bet: Winnipeg to win with less than 6.5 goals scored at +160.
Out of Town Bet:  The Colorado Avalanche to win on the Money Line at -145.
Period Bet:  One goal scored in the first period at +185.
Good luck and happy betting.
Uncategorized
Recent articles from Angus Hout