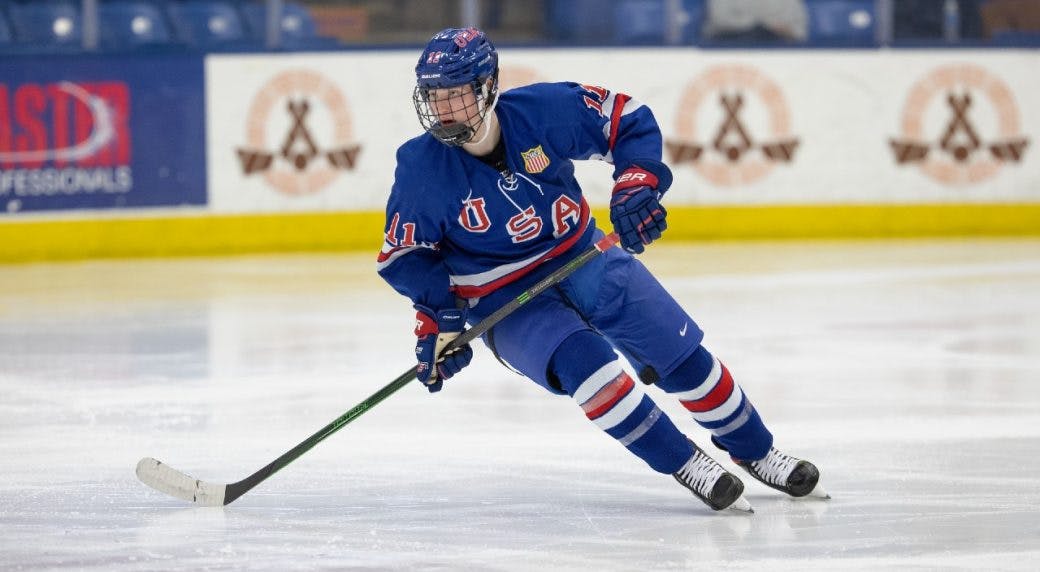 By Thomas Hall
1 year ago
With the opening round of the 2021 NHL Draft underway, the Winnipeg Jets have selected forward Chaz Lucius from USA Hockey with the 18th overall selection.
According to FC Hockey, Lucius, 18, was ranked the No. 14th top skater among this year’s draft class.
At the USA National Development Program this past season, Lucius registered 13 goals, 18 points and a +6 rating through 12 games.
Then with his country’s U18 National Team, the right-hander produced 13 goals, 20 points and a +9 rating over 13 games.
Here’s a player profile on Lucius from FC Hockey’s Dylan Galloway:

“Lucius plays his first game of his draft year and doesn’t seem to have missed a beat picking up 2 goals in the win. His creativity with the puck and hand-eye coordination is what immediately stands out. His first goal came off a quick change in possession after some good hard work down low by Lucius. He collected the puck and slapped a quick hard shot up high on the Steel goalie. Lucius was able to get the shot off from a bad angle and nearly mid-stride.
“The shot could use some more power behind it, but the accuracy and his timing of the shot were excellent. Lucius reads the play well and is highly creative, making it difficult to read what he’s going to do with the puck when it’s on his stick. His shot is dangerous, but he’s also excellent at finding tight passing seams and hitting teammates in open ice, really helping his team use the full sheet of ice. Lucius owns some great edges, allowing him to change directions on a dime. He can change his attack angles and keep up with opponents with relative ease with how mobile he is. His quick feet, good crossovers also allow him to get up to speed quickly and create time and space for himself.
“He didn’t display an elite top-end speed in this game, but his linear crossovers through transition allow him to create some difficulty in keeping him to the outside lane. He’s great at finding space even while under pressure. In combination with his slick hands and skating Lucius is incredibly dangerous on offence, but he also showed solid defensive abilities with his compete and quick stick lifts. He was a positive possession player for his team competing hard through all 3 zones, but particularly in the offensive and neutral zones. Excellent first game back for Lucius.”

Winnipeg is scheduled to select 50th overall in the second round of the 2021 NHL Draft.
Nation Network readers can get 25% off FCHockey’s 2021 NHL Draft Guide with promo code NATIONNETWORK. Unlock your savings at checkout!
Jets News
Recent articles from Thomas Hall