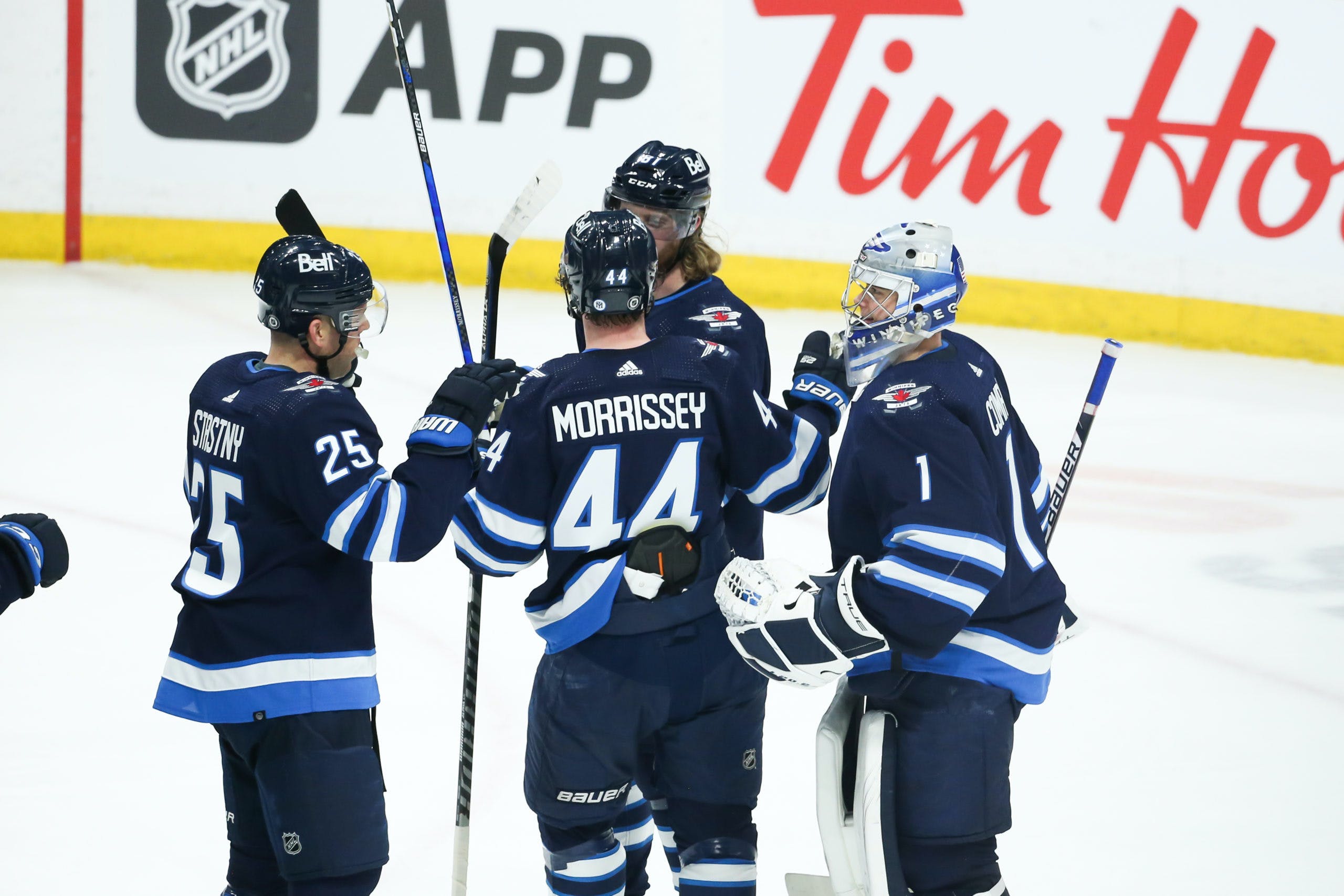 By Thomas Hall
6 months ago
The Winnipeg Jets won’t be heading to the 2022 Stanley Cup Playoffs, although they certainly gave their fans one final thriller at Canada Life Centre on Sunday.
Entering the day with a three-game winning streak, this club was determined to extend that number to four, but first, they needed to fend off the Seattle Kraken. Originally, this game was supposed to be played on Apr. 13, but an unexpected blizzard pushed it to the end of the season. Though, it didn’t lack any intensity.
Less than four minutes into the opening frame, forward @Morgan Barron – who was acquired in last month’s @Andrew Copp trade – drew first blood by registering his second goal with the Jets. It was made possible by a nifty give-and-go between Barron and linemate @Jansen Harkins.
Thanks to this top-shelf score from Barron, Winnipeg controlled an early 1-0 lead over Seattle. A lead they’d carry into the second period, unfortunately, it did last for very long.
Shortly after captain @Blake Wheeler was assessed a two-minute hooking penalty, the Kraken took full advantage of an unfortunate sequence for defenceman @Brenden Dillon, who was tripped up in the corner. As a result, forward @Alexander Wennberg was left all alone in front, where he easily tapped in a pass on the backdoor. This tied the game at one goal apiece.
Later in the frame, the Jets seemed to succumb to the effects of playing their final game of the season, as their performance turned notably sloppy. This quickly became evident on the scoreboard, too. In less than two minutes, Seattle’s skaters cashed in on a pair of mental mistakes, jumping ahead 3-1 through 40 minutes.
It had appeared Winnipeg checked out and was already looking ahead to the off-season. Then the third period began, proving the opposite to be the case.
Looking like they had just been shot out of a cannon, the team seemingly increased its intensity to the max, resulting in one of the most memorable comeback efforts of the campaign. Kicking things off, at the 4:49 mark no less, Wheeler made quick work of @Paul Stastny’s offensive zone face-off win, blasting home his 17th goal of 2021-22.
With this marker, Stastny earned a primary assist, which was also the 800th NHL point of his career. A truly impressive milestone for the 36-year-old veteran.
Wheeler’s goal trimmed his club’s deficit to just one, starting their late-game comeback. Just over two minutes later, the score became tied thanks to another beautiful one-timer, this time from @Dominic Toninato, who was teed up perfectly by Harkins – his second point of the afternoon.
Then, as the clock neared the midway point of the third period, Winnipeg’s most lethal scoring threat, @Kyle Connor, made his presence known. After @Pierre-Luc Dubois, who was set up below the red line in the corner, received a cycle pass from @Mason Appleton, he made sure to find No. 80 in front.
Once the puck reached Connor’s stick, the 25-year-old quickly sent it through Kraken goaltender @Chris Driedger’s five-hole and into the net for his 47th marker. This capped off a stretch of three unanswered scores from the Jets.
As soon as the final horn sounded, Connor was awarded his ninth game-winner of the season, handing his team a 4-3 victory. One that was special for not only the players and their fans, but also for play-by-play commentator Dennis Beyak, who called his final Jets game Sunday.
For everyone leaving the building, this will surely be remembered as one of the wildest and most memorable game No. 82s they’ve ever witnessed. Everything was left on the ice by both teams, who’ll now head off for the summer.
The Jets will certainly have plenty of tough decisions ahead of them over the coming months, especially after missing the playoffs for the first time since the 2016-17 season. In all likelihood, there’ll be some different faces on the roster and behind the bench next fall.
For now, however, they’ll be able to enjoy one last victory from this season.