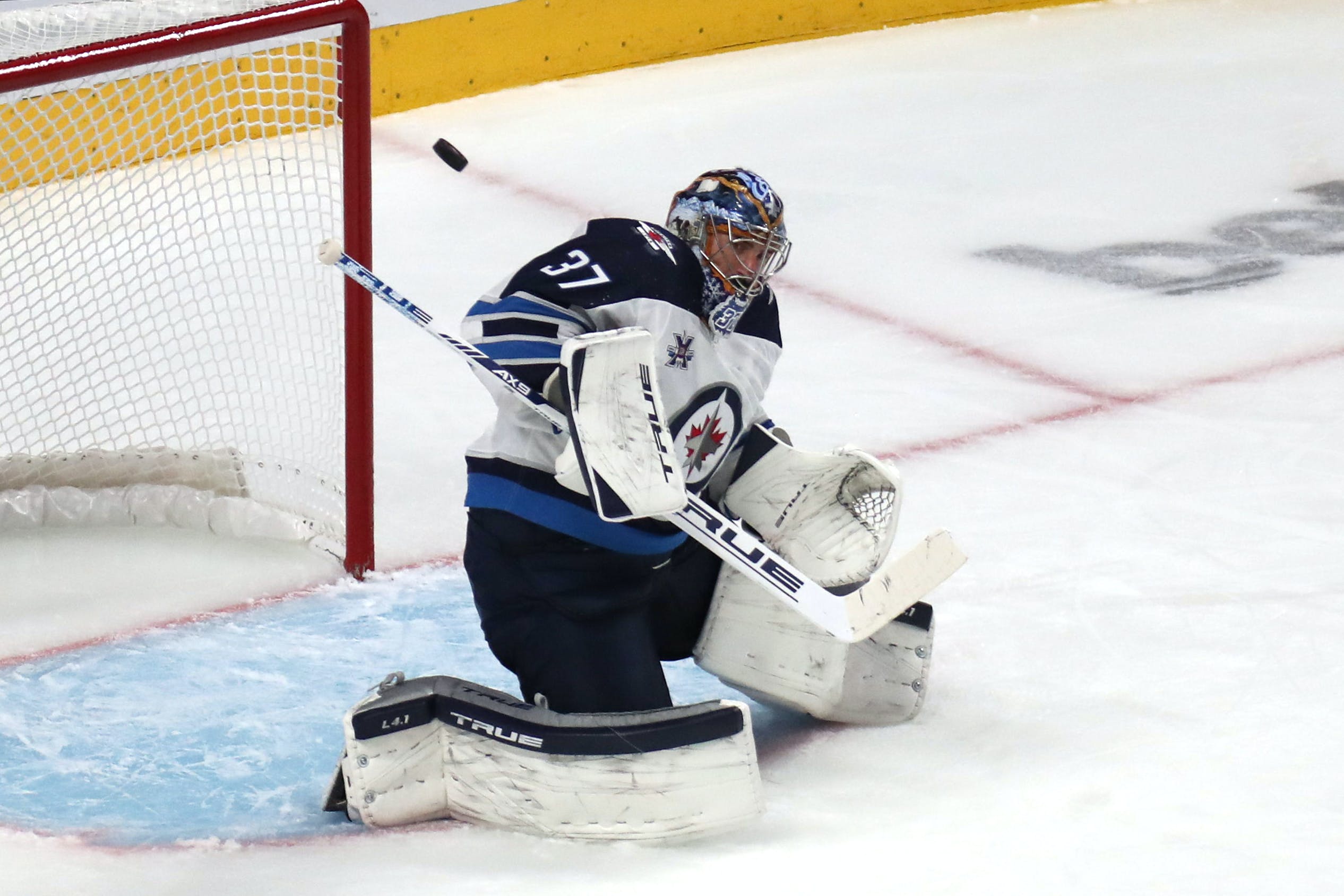 By Angus Hout
1 year ago
I don’t know any fans of the Winnipeg Jets who don’t cheer for @Connor Hellebuyck. Without question, Hellebuyck was one of the major reasons this team advanced to the playoffs this past season, and personally, I believe he deserved to be one of the three finalists for the Vezina Trophy.
Still, the success this organization enjoyed during this shortened season likely wouldn’t have been made possible if not for the two-time All-Star’s stellar performance.
Let’s have a look at what went right and wrong along with what we should expect from Hellebuyck next season.

The first thing that went right for Hellebuyck was his dominating performance during his club’s opening-round playoff matchup against the Edmonton Oilers. The 28-year-old was in the zone throughout the first round. Hellebuyck’s stats were amazing during that span, as he produced a .951 save percentage and only allowed eight goals during the four-game sweep.
The other really impressive thing about Hellebuyck’s first-round performance is the fact he played a total of 300:07 minutes or just over 75 minutes on average per game. The amount of stress he faced and overcame in round one was insane and we all need to respect the starter’s work ethic.
The regular season went pretty well for Hellebuyck when you consider who was defending in front of him. It’s nothing against the Jets’ defenders, but having a lack of consistent support was tough to watch sometimes. Early in the season, I wrote about Hellebuyck because it looked like he was enduring a rough start to the season and I said, “I went back and watched all of the goals against Hellebuyck and most of the five-on-five goals are either redirections, second chances or a total lapse in judgment from the defense.”
Think about it, how many times did you say to yourself during the season, “Where was your head on that one, Hellebuyck?” You can say that about the goal from @Chris Tanev, where he scored from the blue-line early in the season, and even a few times during the Jets’ seven-game losing streak. But other than that, he was extremely effective all season long.

There wasn’t much to find wrong with Hellebuyck’s performance this past season. I guess that’s one of the perks of being a top-five goalie in the world, but I suppose there are a few things I can point out.
Right after the Jets won four in a row and swept the Oilers, things didn’t go well for Hellebuyck in round two against the Montreal Canadiens. In that series, he performed to a 3.03 goals-against average and a .908 save percentage. It was a major step back for Hellebuyck. Maybe it was the nine days off prior to Game One of that series or the lack of support he received from his defense but it was not his best hockey.
The other thing that went wrong was really unfortunate for Hellebuyck and was probably one of the reasons he lost out on the Vezina Trophy. The former fifth-round pick endured the longest losing streak in his professional career, which lasted six games. We all remember that because it was the only time the mainstream sports media would talk about the Jets and questioned if they were a legit playoff team.

That totally depends on what general manager Kevin Cheveldayoff does with Winnipeg’s defense. If it improves and the Jets can acquire a top-two defenseman, we can probably expect another Vezina-worthy performance from Hellebuyck. If the defense remains the same, then we’re probably looking at an exhausted Hellebuyck who might fall off the train.
Let me know what you thought of Hellebuyck’s 2020-21 season and if the blame for his performance in round two is on the lack of quality defensemen. What was your favorite Hellebuyck moment? Let me know in the comments below or hit me up on Twitter or Instagram – @angushout.
All stats are from HockeyReference.com.
Uncategorized
Recent articles from Angus Hout