Jets Nation Radio Are these Winnipeg Jets a bunch of phoneys? 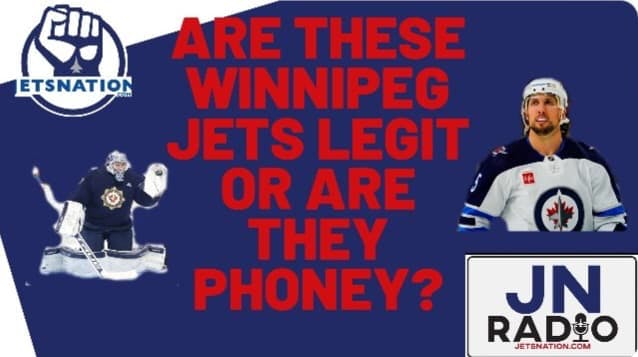 By Angus Hout
27 days ago
Welcome to Jets Nation brought to you by NHL odds site Betway! Angus Hout goes solo and starts the podcast off over the moon excited the Winnipeg Jets are on top of the central division. He starts off talking about the Winnipeg Jets running the Dallas Stars out of the building. Angus sings the praises of Josh Morrissey and the fact he has been one of the best players for the Jets and one of the best defenders in the NHL. Angus talks about all the veteran defenders and why each of them is incredibly important to the Jets.  We hear about why there is such a log jam with the Jets’ defence and how to clear it up. Who Ville Heinola should be mad at? Angus will let you know he’ll let you know why Heinola is in the AHL.
Angus talks about the Reverse retro and why the jersey itself needs a little bit of red and why the Jets’ Reverse Retro crest is perfect. This leads to a sidebar about other Reverse Reto’s.  Angus moves on to talking about Kyle Connor and how many goals he will score by the end of the season and what our expectations should be for him. More Morrissey talk Angus discusses how underrated he is. Angus has a bold take that he can run a mile in 9.5 minutes.  Who has played the best as a Jet in the first month of hockey? It’s Connor Hellebuyck and Angus is stoked about the Jets goaltender and wonders about Hellebuyck’s next contract and what it would look like as well as how other contracts for the Jets will look in the next two seasons.

Angus is excited about the Jets’ third line the summer of depth signing and how has gone for the Jets and why it worked. Angus talks about who has been the best summer signing. Angus makes fun of the Calgary Flames and our friends over at Flames Nation. Angus talks about being cautiously optimistic with this Jets team and reminds us of last year when the Jets fell off the wagon. But fear not he does tell us why we shouldn’t worry about a repeat of last season. There’s a talk of how many times we should see divisional rivals.
Angus tee’s up the next couple of games and talks about the standings. He talks about the Seattle Kraken game and talks about Martin Jones being the Kraken’s starter. We get around to previewing the Flames game and why it worries Angus but a big hype up of David Rittich. Quick talk about the Jets’ special teams and how the Jets have gotten better and how many shorthanded goals can he score. Angus talks about the Jets locker room and how it has come together. Lots of hype for the Jets. Finally, Angus talks about what will the Jets look like when Nikolaj Ehlers is healthy. Who has scored the most career-shorthanded goals in the NHL?
Jets News
Recent articles from Angus Hout