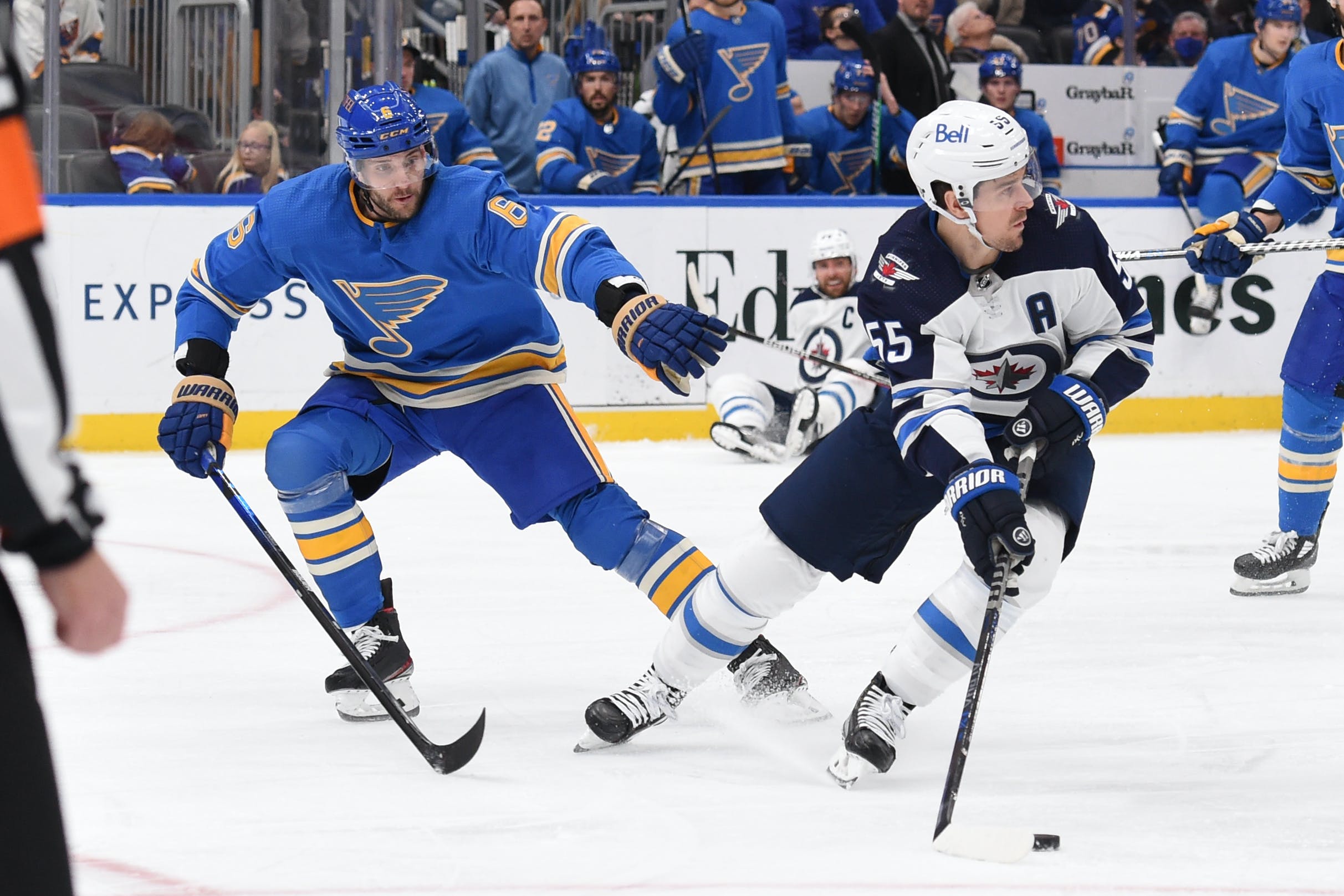 By Angus Hout
1 month ago
For the first time, this season the Winnipeg Jets are sitting at a record below .500. The Jets have played well for the majority of their games but have lacked finish since Nikolaj Ehlers went down with an injury. Rick Bowness would give us a little update on his injury on October 22nd  saying Ehlers should be back in about 10 days’ time. The game against the Toronto Maples last Saturday was one of those games where the Jets had very little puck luck and had the task of beating the refs as well as the Leaf. Pierre-Luc Dubois would score early and would ring the puck off the post twice after his goal. Blake Wheeler had a great chance but held the puck too long and Ilya Samsonov would make the big save. If you watched the game against the Leafs you saw Cole Perfetti get boarded Dubois stand up for him and Dubois was the only one in the box. Or we could talk about Josh Morrissey bumping Calle Jarnkrok which led to an interference call and the first goal against the Jets. In all honesty, the Jets outplayed the Leafs but couldn’t beat the refs. You can’t win games when you don’t score and the Jets have no excuse not to score with the talent they have but the reffing in the NHL needs to be better.
This morning in the pregame presser head coach Bowness said “We need to score some greasy goals, it’s what we talked to the guys about this morning.”
St. Louis Blues are off to a 3-0 start this season. That is a bit of a skewed stat as they have defeated two weaker teams, the Columbus Blue Jackets and the Seattle Kraken and a team who has not lived up to their potential in the Edmonton Oilers. In the Blues first three games, they have an expected goal for of 5.7 and expected goals against of 7.6. Blues goaltender Jordan Binnington has been playing lights out stopping 78 of 83 shots and owning a 1.65 goals-against average. In seven games against the Jets in the regular season has a record of 3-3-1, lifetime against the Jets the Blues goaltender has a 2.96 goals-against average and .905 save percentage.
Connor Hellebuyck is expected to be getting the start in the net tonight for the Jets. Hellebuyck is looking like an elite goaltender once again. Although his record is just 2-2  with a 2.75 goals-against average and .915 save percentage.  in 16 regular season games against St. Louis Hellebuyck’s record is 10-4-2 with a goals-against average of 2.11 and a save percentage of .931.
If you’re hoping for an easy night in the special teams you are in for a rough night. The Blues penalty kill is still perfect through three games and their power play has been humming at 28.6 percent. The Jets special teams have been brutal, the penalty kill is down to 69.2 percent and the power play is 14.3 percent. The Jets have not been good enough on special teams and need to be better if they want to pick up some wins.
Mark Scheifele and Neal Pionk continue to lead the Jets in goals with three each. Four Jets are tied for first with assists including Cole Perfetti, Josh Morrissey, Blake Wheeler and Ehlers. Looking at our opponents for tonight Vladimir Tarasenko leads the Blues in points(six) and assists (four). Justin Faulk leads the Blues in goals(three).
Last season the Jets had a 3-1 record against the Blues in the 2021-22 season and outscored the Blues 14-8.
Sam Gagner will start on the third line tonight in hopes to get that line a bit of a kick of offence. With Gagner on the third line hopefully, he can find some chemistry with Morgan Barron and Adam Lowry. With the change in the line and from what I’ve seen from Barron this season he is my player to watch tonight.
The Money line for tonight’s contest is tight on Pionts Bet Canada, The money line for the Jets is -115 and the Blues money line is -105.
Editorials
Jets News
Uncategorized
Recent articles from Angus Hout