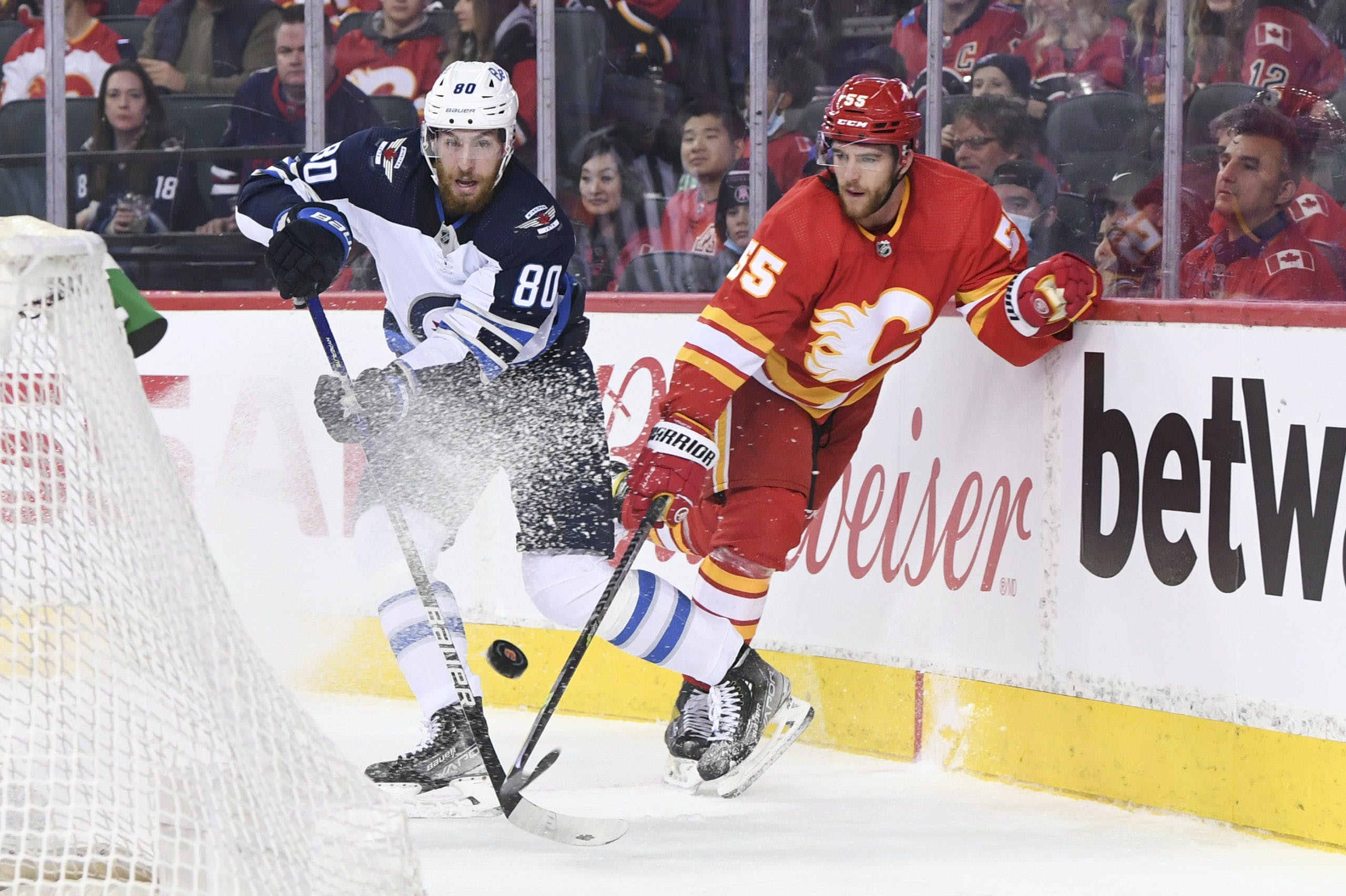 By Angus Hout
23 days ago
Welcome to Jets Nation brought to you by NHL odds site Betway! The Winnipeg Jets continue to sit on top of the Central Division after taking the Dallas Stars to the cleaners on Tuesday night. The Jets have picked up 13 of 14 points in their last seven games.  It’s been a long time since we have seen the Jets play a complete game like that from the first puck drop to the final buzzer the Jets were on their game. Mark Scheifele scored twice in less than three minutes the Jets would not mess around after going down 1-0 early in the second period. Saku Mäenalanen would score his first goal with the Jets with a sweet little tip-in from Neal Pionk. Connor Hellebuyck has allowed three goals in three games but would be left off the three-stars sheet even though he stopped 21 of 22 shots.
The Jets are starting their third back-to-back set of the season and the first game in three days.  The Calgary Flames are bringing the Jets into the Scotia Bank Saddledome tonight at 9:00. The Flames enter this contest dropping their last seven games. Suppose you wanted to know the longest losing streak for the Flames its 11 games. Flames Nation.ca has a full article about it.  The Jets have picked up at least a point in their last seven games, and have looked like a cohesive unit to start off the month of November.
The Calgary Flames have dropped their last seven games but have not been playing poorly they just can’t get goals or they allow goals late in a game and fall short of a victory. The Flames come out hot and heavy and have started their games on time but can’t get those greasy goals, much like when the Jets were losing their games earlier in the season. Flames head coach Darryl Sutter would say after the loss to the Boston Bruins on November 10th “You just need to be consistent, you’ll be rewarded for it.”
Both Winnipeg and Calgary are tied at 19th on the power play scoring in 20 percent of the extra man attempts. The Jets’ penalty kill is slightly better than the Flames’. The Jets have killed 83.3 percent of their penalties the Flames 81.8 percent. In the Saddledome the Jets have a record of 10-6-1, may the winning ways carry on tonight.

This is a late start Hockey Night in Canada game I’m expecting a complete barn burner. We know the Flames and Jets strongly dislike each other. In the two preseason games, there were 58 minutes of penalties in total. Although Matthew Tkachuk is gone the Flames replaced his rat attitude with Nazem Kadri who leads the Flames in points(12) and goals (7). Josh Morrissey leads the Jets in points(12) and Mark Scheifele leads the team in goals(8).
Since the bubble playoffs, the Jets have a record of 8-3-1 over the Flames and have outscored them 38-26 in that time. Connor Hellebuyck is expected to get the start for the Jets tonight. Hellebuyck is starting his fifth straight game and loves to play the Flames. According to Statmuse.com, he has a 12-4-1 record against a 1.87goals against average and a .936 save percentage against the Flames. Jacob Markstrom has a rough stat line when it comes to playing the Jets, he owns a record against the Jets of 5-14-2  a goals-against average of 3.27 and a .890 save percentage.
Both teams have been hit by the injury bug. The Flames will be without Chris Tanev, Michael Stone and the new shiny toy Jonathan Huberdeau due to injury. The Jets will be without Nikolaj Ehlers, Logan Stanley and Morgan Barron.
The Jets and Flames have cultivated a fantastic rivalry. With how the preseason went when the Jets humiliated the Flames in the two preseason games. The Flames are desperate for a win after losing so many games in a row they have played well through their losing streak they just can’t score. If the Flames get frustrated because they can’t beat Hellebuyck we might see a team full of crybabies and bullies who try to win by playing dirty, expect a fun game of hockey.
Editorials
Recent articles from Angus Hout